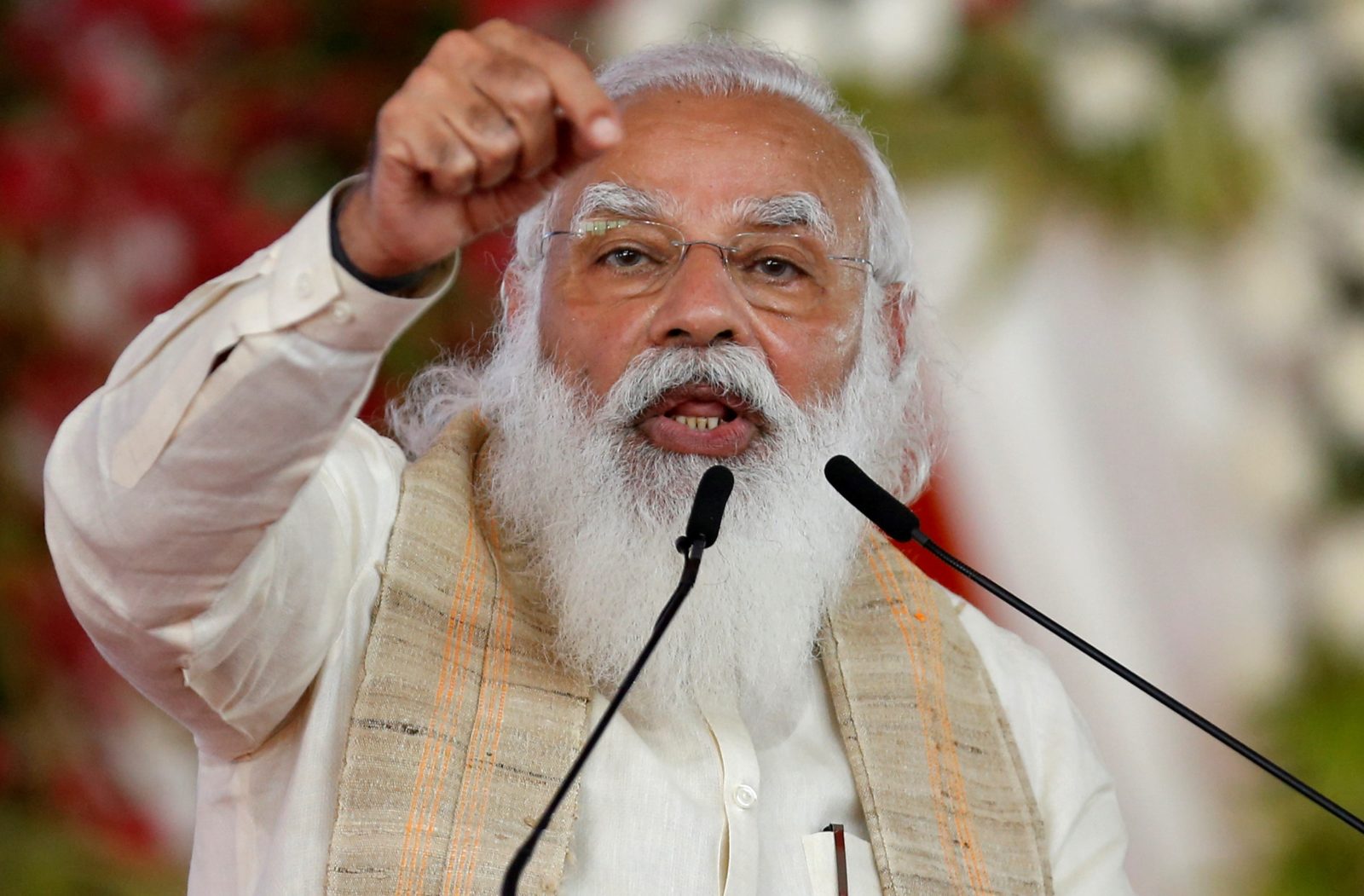 New Delhi: Prime Minister Narendra Modi on Thursday said states should observe a ‘vaccine festival’ between April 11 and 14 to inoculate the maximum number of eligible beneficiaries against COVID-19 even as Union health minister Harsh Vardhan called for an end to “fear mongering” about shortage of vaccines after some states complained of lack of supplies.

The calls by Modi, at yet another interaction with chief ministers, where they were urged to strengthen efforts for the next 2-3 weeks to check the spread of the virus on a “war-footing”, and Vardhan came on a day when the daily count of new COVID-19 cases hit a record high, of over 1.26 lakh. The prime minister also said that administration was appearing lax in many states.

Modi asked the chief ministers to focus on micro-containment zones and reiterated his call to work on the mantra of ‘test, track, treat’ besides pushing COVID-19-appropriate behaviour and management. He asked states to not bother much about positive cases and focus on more testing.

“Our efforts should be to inoculate the maximum eligible people during the ‘Tika utsav’ (vaccination festival) between April 11 and 14,” he said, asking youngsters to help those above 45 years of age to get the jab. April 11 is the birth anniversary of noted social reformer Jyotirao Phule, he noted.

Vardhan took to Twitter to say that 9.1 crore vaccine doses had been utilised, while 2.4 crore are in stock and 1.9 crore vaccines are in the pipeline, indicating there are sufficient doses available for all states.

As more states like Uttar Pradesh and Karnataka and the union territory of Jammu and Kashmir imposed night curfew in several districts up to the end of this month, Modi defended this measure saying it has been an experiment globally to contain the COVID-19 spread, and proposed to call the night restriction a “corona curfew” to maintain public awareness about the pandemic.

Taking a cue from Modi, Karnataka chief minister B.S. Yediyurappa used the term “night corona curfew” while announcing this restriction between 10 pm to 5 am in seven district centres, including Bengaluru.

In his virtual interaction with chief ministers to discuss the pandemic situation and the ongoing vaccination drive, Modi strongly defended the current eligibility criteria for the vaccination amid demand by some states to make the shot open for everyone older than 18 years.

India’s criteria is no different from the most prosperous countries in the world, and it will have to prioritise the vaccination, he said. As of now, those above 45 years are eligible for the jabs.

With the debate assuming political overtones in some cases, Modi said wryly that those doing politics over the matter may do so but he will not join issue and asked chief ministers to work together with the Centre to prevail over the pandemic.

Maharashtra Chief Minister Uddhav Thackeray told the prime minister that the state was not lagging behind in the fight against COVID-19, and urged him to affirm there should be no politics in this effort.

A statement issued by the chief minister’s office in Mumbai said Thackeray requested the prime minister to address the leaders of all political parties, asking them to refrain from indulging in politics on the issue.

Delhi health minister Satyendar Jain said the fight against coronavirus is not a Centre-versus-state issue and that it should not be politicised.

Some senior functionaries of the Maharashtra government had recently hit out at the Centre over the allegedly low availability of vaccines in their state, inviting a sharp rebuke from Vardhan.

Vardhan on Wednesday accused Maharashtra and some other states of doing politics over the vaccine issue by trying to cover their “failures” and spreading panic among people by demanding vaccination of all without inoculating enough eligible beneficiaries.

Stating that the country had brought down its active cases to 1.25 lakh from 10 lakh earlier with a similar approach, Modi expressed confidence that the nation will win over the crisis as it now has better resources, more experience besides vaccines.

Modi said the situation is more worrisome in some states with people becoming much more casual in their behaviour and administration appearing lax in many states. This sudden surge had created difficulties, he acknowledged.

“There is a need to improve the governance system. I understand that because of the one-year battle, the system can experience tiredness and there can be laxity, but we must tighten it for 2-3 weeks and strengthen the governance… To stop the spread of the virus, there is a need to work on a war-footing,” he added.

In his address, Modi underlined that the case load has surged past the peak during the first wave, that their growth is also higher, and that Maharashtra, Chhattisgarh, Punjab, Madhya Pradesh and Gujarat are now reporting more cases than they did in the last year.

“Some other states are also moving in that direction. This is a matter of worry.”

Minister Vardhan dismissed as a “farce” the “hue and cry” by certain states about partisanship by the Centre and called it an attempt to hide their own incompetence, saying non-BJP ruled Maharashtra and Rajasthan figured among the top three states based on allocation of vaccines.

Releasing the figures, he said in another tweet, “Let’s put an end to fear mongering now! #COVID19 vaccine doses: total administered: 9 cr+ In stock/nearing delivery to states: 4.3 cr+ Where does question of shortages arise? We’re continuously monitoring and enhancing supply.”

Maharashtra health minister Rajesh Tope had sought to know why the state was getting fewer COVID-19 vaccine doses as compared to some other states, including Gujarat and Madhya Pradesh, even as it led the vaccination drive and had the highest number of active cases in the country.

The ongoing COVID-19 vaccination drive in Mumbai will come to a halt from Friday as the stock of vaccine doses in the city is about to end, Mayor Kishori Pednekar said.

Reuters reported that vaccine centres in several states, including Maharashtra, have been shutting early and turning people away as supplies run out.

Healthcare workers outside a government hospital in Mumbai city were seen turning people seeking vaccinations away, asking them to call a helpline number set up by the municipal authorities. It was not immediately possible to confirm whether those seeking the shots were in the priority groups.

“We don’t know when the vaccine will be back in stock. It could be available later today or maybe tomorrow,” one said. Notices saying “vaccine out of stock” were plastered outside a centre in a neighbouring suburb, along with helpline numbers. In two other districts in Maharashtra, local officials said inoculation efforts had been stopped and centres were closed.

Odisha state said it had closed half its vaccination sites.

Punjab Chief Minister Amarinder Singh urged the Centre to give flexibility to states to devise local strategies for COVID-19 vaccination within the broad parameters of the central government’s approach. In a letter to the prime minister, he also sought a review of norms in order to allow all adults in high-risk areas to be immunised, along with people below the age of 45 suffering from liver and kidney diseases.

Chhattisgarh chief minister Bhupesh Baghel requested the prime minister to allow all people above 18 years to get vaccinated against COVID-19.

However, Modi rejected these calls. “It’s not that you can set up these big vaccine factories overnight,” Modi said in his address to chief ministers. “Whatever production we have got, we will have to prioritise.” He added, “In our cities, a huge segment is poor or elderly… we should take them for vaccination and prioritise it.”

Opposition parties have blamed Modi’s government for exporting 64.5 million vaccine doses while itself covering only a fraction of India‘s 1.35 billion people. “Why was there no strategy or planning put into the logistics of the vaccine programme?” the main opposition Congress party said on Twitter. “Why is there both extremely high wastage and an acute shortage of vaccines?”

New Zealand on Thursday suspended entry for all travellers from India, including its own citizens, for about two weeks.