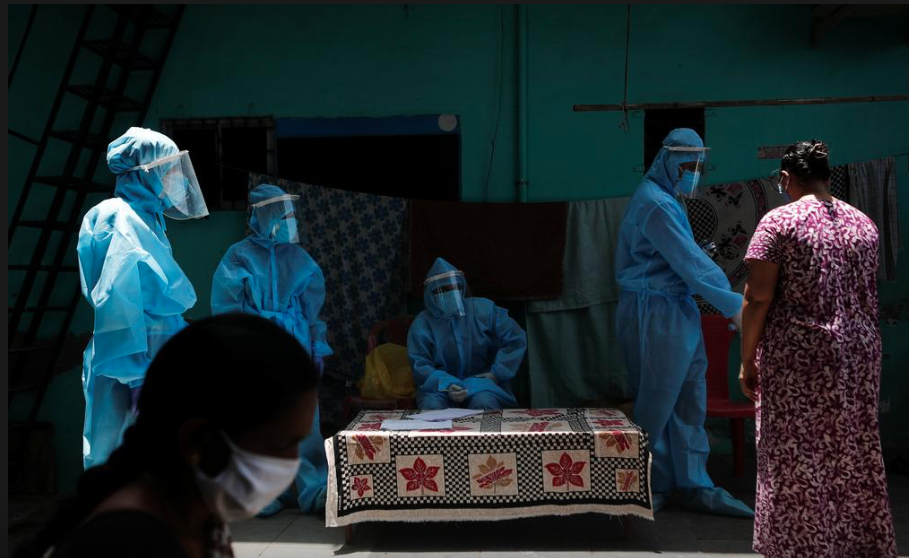 A woman wearing a protective mask walks past a healthcare camp set up for the coronavirus disease (COVID-19) in Dharavi, one of Asia’s largest slums, Mumbai, India. Photo: Reuters/Francis Mascarenhas

New Delhi: India has recorded a steady rise in the COVID-19 active cases over the past few days with a surge in daily infections in five states and Jammu and Kashmir, sparking fears of a second wave and prompting the Centre to direct them to refocus on strict surveillance, containment and RT-PCR-testing.

According to the health ministry on Sunday, the active cases were pegged at 1,45,634, with more than 74% of them in Kerala and Maharashtra, which has announced a state-wide ban on social, political and religious gatherings, besides imposing fresh local lockdowns or curbs in districts like Pune and Amravati.

The states of Chhattisgarh, Madhya Pradesh and Punjab and the union territory of Jammu and Kashmir have also seen a surge in daily cases, according to the Union Health Ministry, which said 85.61% of the new cases are from these five states and the UT and their weekly positivity rate is more than the national average of 1.79%.

Maharashtra has the highest weekly positivity rate with 8.10%.

Asking people to follow “COVID-appropriate” behaviour and safety norms, Maharashtra Chief Minister Uddhav Thackeray said he would observe for a week to 15 days before deciding on imposing another lockdown.

“The pandemic is raising its head in the state again, but whether this is a second wave will be known in eight to 15 days,” he said in a televised address.

The Union Health Ministry has also written to all states and UTs on the need to significantly enhance the pace of COVID-19 vaccinations, while experts have cautioned against letting the guard down or factoring in “herd immunity” which could be “very difficult” to achieve due to the “variant strains”.

India has made considerable gains in controlling the pandemic with 22 states and UTs not reporting any COVID-19 death in a span of 24 hours.

The national capital appeared to be heading towards reopening completely – from schools to colleges, courts to public transport, and other places and services which were partially functioning so far in view of the COVID-19 pandemic.

Delhi on Sunday recorded 145 fresh COVID-19 cases and two new fatalities due to the disease, as the positivity rate dipped to 0.23%, authorities said.

However, daily national tally of COVID-19 cases increased for the fourth consecutive day with 14,264 new cases on Sunday, taking the total count to 1,09,91,651, while the death toll increased to 1,56,302 with 90 more fatalities, the data updated at 8 AM showed.

“Of late, it is seen that there has been a spike in the daily cases in Chhattisgarh and Madhya Pradesh also. Punjab and Jammu and Kashmir too are witnessing a surge in daily new cases,” the ministry said.

The ministry said Maharashtra continues to report the highest daily new cases at 6,281. It is followed by Kerala with 4,650 while Karnataka reported 490 new cases.

The five states, along with J-K, which are now a cause of concern have been advised by the Centre to improve the overall testing numbers by focusing on increasing the proportion of RT-PCR tests.

It has asked them to refocus on strict and comprehensive surveillance as well as stringent containment in selected districts and conduct regular monitoring of the mutant strains through testing followed by genome sequencing, as well as monitoring of the emerging cluster of cases, the health ministry stated.

They have also been asked to pay attention to clinical management in districts reporting higher deaths.

In Maharashtra, in the last four weeks, the weekly tally shown a rising trend and increased from 18,200 to 21,300.

The Mumbai suburban areas have seen a weekly rise in cases by 19%. In Nagpur, Amravati, Nashik, Akola and Yavatmal the weekly cases have increased by 33%, 47%, 23%, 55% and 48%, respectively, the union health ministry noted.

The Pune district administration announced curbs, including restrictions on the movement of people from 11 PM to 6 AM for non-essential activities.

Schools, colleges and private coaching classes will remain closed till February 28, while hotels and restaurants will have to shut their establishments by 11 PM every day, Pune divisional commissioner Saurabh Rao told reporters.

“The infection was expected to re-surge. Therefore, people should not be complacent till the last man in the country is cured of the pandemic,” All India Institute of Medical Science (AIIMS), Bhopal, Director Dr Sarman Singh told PTI.

AIIMS, Delhi director Randeep Guleria stressed on the importance of vaccination, which he said is essential in India’s fight against the coronavirus.

“Herd immunity is something that is going to be very, very difficult to achieve and it is something one should not really think of in practical terms… because the variant strains and varying immunity with times can lead to a chance where people may have reinfection or get the infection again,” he said.

Herd immunity implies that in any set of people in a community, after becoming affected by the virus, many of them become immune to it, on account of antibodies developed in response to it. And, hence, such people become a protective layer between the infected person and unaffected people, thereby breaking the chain of viral transmission.

However, the Union Health Ministry has written to all states and UTs on the need to significantly enhance the pace of COVID-19 vaccinations, noting that a large number of healthcare and frontline workers remain to be covered.

Also Read: What Is Driving Mumbai’s COVID-19 Surge? And How Bad Is It?

In a letter addressed to chief secretaries of all states and UTs, Union Health Secretary Rajesh Bhushan said the number of days of vaccination in a week should also be increased to a minimum of four days at the earliest to speed up the process of vaccination and gear up the system to take up the vaccination of the 50+ population.

The second dose of COVID19 vaccination started on February 13 for those beneficiaries who have completed 28 days after receipt of the first dose.

Vaccination of the frontline workers started on February 2.