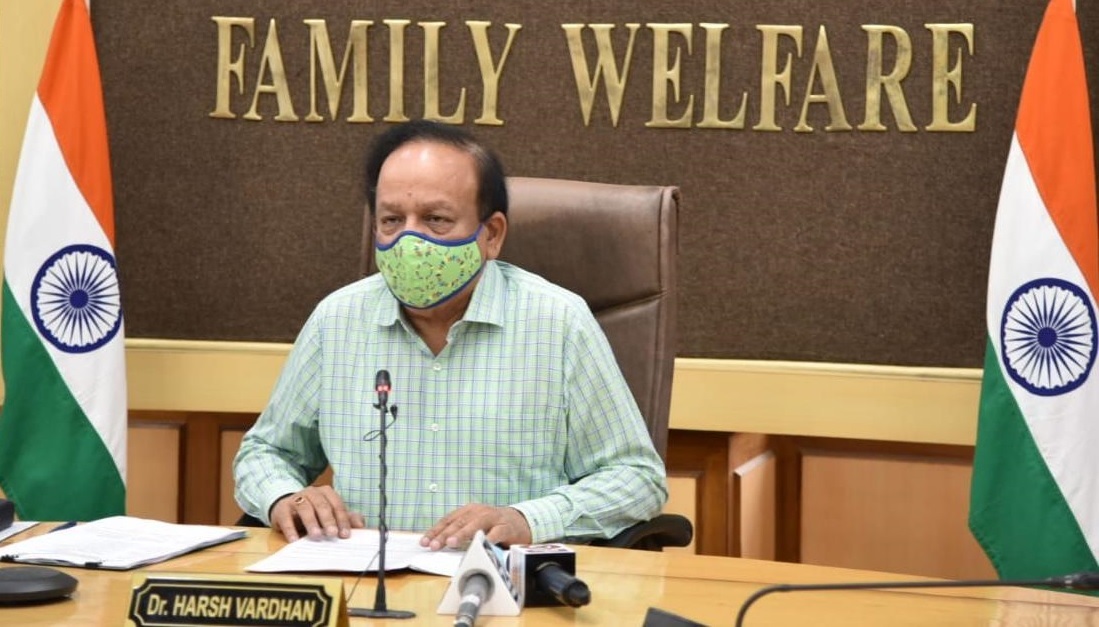 New Delhi: In a starkly political response to a list of suggestions that former prime minister Manmohan Singh made in a letter to his successor Narendra Modi on combating the alarming rise in COVID-19 cases in the country, Union health minister Harsh Vardhan on Monday attacked the Congress party for apparently attempting to derail India’s vaccination drive.

On Sunday, Singh’s letter said that ramping up the vaccination drive is key to battling the pandemic, asking the government to “resist the temptation to look at the absolute numbers being vaccinated, and focus instead on the percentage of the population vaccinated”.

He added that India currently has vaccinated only a small fraction of its population, adding that with the right policy design, “We can do much better and very quickly.”

History shall be kinder to you Dr Manmohan Singh ji if your offer of ‘constructive cooperation’ and valuable advice was followed by your @INCIndia leaders as well in such extraordinary times !

Vardhan acknowledged that Singh’s emphasis on vaccination was shared by the government – and then launched into a boastful tirade. He highlighted that the “world’s biggest vaccination drive” has become the fastest to reach the milestones of 10, 11 and 12 crore administered doses.

But Bhramar Mukherjee, a biostatistician at the University of Michigan, told the BBC that India’s current pace of vaccination – which is around 3 million doses a day – is ‘complacent’ and the country should aim to vaccinate at least 10 million people every day.

This may not be possible in the immediate future as India is facing a debilitating vaccine shortage. After hitting a record high of more than 43 lakh doses administered on April 5, India has not been able to match this number since. In fact, in the last week, the average doses per day was only 2.76 million, according to covid19india.org.

In his reply, Vardhan said junior members of the Congress party must also follow Singh’s advice. “Quite obviously, it cannot be said that the discussion on total cases, active cases or mortality is based on absolute numbers, which the Congress party often tries to do,” the health minister said.

Vardhan continued to attack the Congress party, saying that members of the party and state governments formed by it “do not seem to share” Singh’s views. “It is shocking that senior members of the Congress party are yet to utter a single word of gratitude towards our scientist community and vaccine manufacturers for innovating under trying circumstances and empowering the world with vaccines,” the health minister added.

Scientists and healthcare workers have previously said that more than expressions of gratitude, they need the freedom to determine and then the resources to execute their research agendas without interference from the government.

Recently, Vardhan – who is also the science minister – had chastised representatives of various ministries for the delay in approving and funding research projects primed to scientifically validate the “uniqueness of indigenous cows and its products”. The government’s promotion of the so-called ‘cow science’ has been criticised by the scientific community. Vardhan was also called out by the Indian Medical Association for his presence at an event in February 2021, during which Baba Ramdev claimed that Patanjali’s ‘medicine’ Coronil would ‘treat’ COVID-19, without any evidence to support the claim.

Vardhan also accused the party’s governments of “spreading falsehoods” regarding the efficacy of the vaccines candidates that India is administering, “thereby fuelling vaccine hesitancy, and playing with the lives of our countrymen”. He said a Congress party chief minister had incited people against taking Covaxin, India’s indigenous COVID-19 vaccine candidate.

While Vardhan didn’t mention who he was referring to, media reports show that several Congress leaders had expressed alarm at the government’s decision to approve Covaxin for use even before data from its phase 3 clinical trials had become available. They were not alone in doing this, as many health and medical experts had also questioned the move. These experts were of the opinion that while the vaccine candidate may prove to be safe, it should not have been approved before having access to data that demonstrated safety and efficacy.

Punjab chief minister Amarinder Singh had said in early March that the allegation by BJP spokesperson Sambit Patra that his state government, along with other opposition-ruled states, had expressed “doubts and refused to accept” Covaxin. “It was not at all true,” Amarinder Singh said, describing it as a “complete lie” that was part of the ruling party’s “false and politically motivated propaganda”.

Vardhan then placed the blame for India’s second wave of COVID-19 on Congress-ruled states. “The test positivity ratio in these [Congress-ruled] states during the second wave is alarmingly high and they too could benefit from your counsel and wisdom.”

Vardhan then told Singh that those who advised him in drafting the letter have “done a great disservice” to him by “misleading” the former PM on material that is already in the public domain. He says that on April 11, the Centre had already decided to allow the import of vaccine candidates that have been approved in other countries, a suggestion that Singh had made in his letter.

While this is true, by April 11, many state governments were already complaining about a shortage in available vaccine doses.

The health minister said that the Centre had also acted on another suggestion made by Singh, that funds and other concessions should be made to companies that are involved in the process of manufacturing vaccines.

Vardhan’s ‘response’ ignored two crucial suggestions made by Singh – that the Centre should publicise how many orders it has placed with different vaccine manufacturers, so that state governments can plan for the vaccination drive based on a ‘transparent formula’. The former PM had also said that states should be given leeway in defining frontline workers, saying that some governments may want to vaccinate school teachers, bus drivers or taxi drivers. The health minister did not indicate whether such a move would be approved by the Centre.