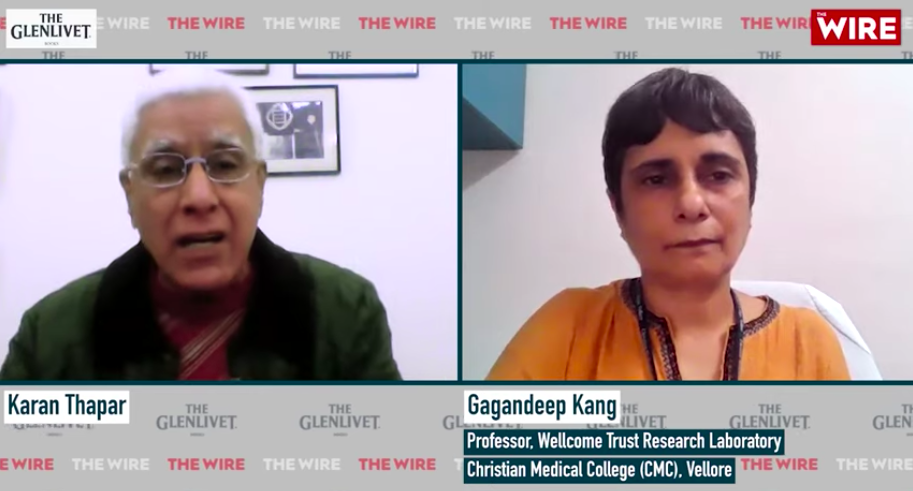 The Arctic Hasn’t Been This Warm for 3 Million Years

New Delhi: In an interview where she addresses in detail the concerns raised by both Bharat Biotech’s vaccine Covaxin and the Oxford-AstraZeneca vaccine made by the Serum Institute, called ‘Covishield’, India’s top vaccine scientist has said that whilst she is willing to participate in clinical trials of any vaccine she will not take Bharat Biotech’s Covaxin as a vaccine until its required efficacy data is made public.

In a 48-minute comprehensive interview to Karan Thapar for The Wire, Gagandeep Kang, who works at The Wellcome Trust Research Laboratory at the Christian Medical College in Vellore, said the precedent set by the Ebola and Nipah vaccines, both of which were cleared without completing their Phase 3 trials and obtaining their efficacy data, does not apply to COVID-19.

She said this is both because of the differences in the disease and its mortality as well as the fact that we have other licenced products to tackle COVID-19. “I would ask why would you want to give a vaccine without efficacy emergency use authorisation in these circumstances?” she said.

Commenting on the claim made by Dr. Krishna Ella, the chairman of Bharat Biotech, that the 2019 Clinical Trial Rules permit in an emergency the clearance of an untested vaccine on the grounds that its Phase 2 data, which establish safety and immune response, are acceptable, Kang made it clear that she did not agree. She said whilst the rules allow the bypassing of all clinical trials this was, she believed, to avoid bridging studies in the case of foreign vaccines that have undergone trials abroad.

Also read: India’s Vaccine Approvals Had One Problem. It Gave Rise To the Other Two.

In her belief the rules do not permit authorising the use of a vaccine without completing the Phase 3 trial. That is what has happened in the case of the Bharat Biotech vaccine.

Questioned by The Wire about the head of the ICMR Dr. Balram Bhargava’s claim that Bharat Biotech’s efficacy has been established by animal trials and Phase 1 and Phase 2 trials, Kang once again made her disagreement very clear. She said whilst animal trials are used in America to clear drugs its only when you can properly mimic the human disease in the animal. She said that is not the case with COVID-19. Secondly, she said Bharat Biotech’s Phase 1 and Phase 2 trials involved a total of 800 participants and that is far too small a number to rely on for efficacy data.

Speaking to The Wire about a claim made by both Dr. Balram Bhargava and Dr. Vinod Paul that the Bharat Biotech vaccine has been cleared because it could be better at tackling new strains of the virus and, in particular, the British mutation, Prof. Kang said “I wish we had data to establish this”. She added: “At the moment we don’t”. She said the Bhargava-Paul claim is simply “a hypothesis”.

Also read: ‘Never Seen Anything Like it’: Gagandeep Kang on India’s Vaccine Approvals

Kang told The Wire she is “really confused” by the language that the Bharat Biotech vaccine has been cleared for use “in clinical trial mode”. She said she’s “not sure what that means”. In the interview she seemed to accept that this could mean that people who get the vaccine will actually end up being part of the continuing clinical trials.

Asked if the international community will conclude that India has cleared the Bharat Biotech vaccine in a way that is similar to how the Russians and Chinese cleared their vaccines her reply was short, sharp and simple: “absolutely”. She said there’s “very little difference between the way the Chinese and Russian vaccines have been cleared and this one”.

Speaking to The Wire about the Oxford-AstraZeneca vaccine, Kang said the fact it ended up with two outcomes from its trials – 60% efficacy from two full doses and 90% efficacy from a half dose followed by a full dose – is “really messy”. She said if she had been the regulator she would have set aside and disregarded the serendipitous 90% outcome because that was not the procedure Oxford AstraZeneca initially intended to follow. She would have been gone by the efficacy result that emerges out of the procedure they had originally said they were going to pursue i.e. the 60% outcome.

Kang told The Wire that the two or three cases of neurological problems after the Oxford-AstraZeneca vaccine are a different matter. However, she added there have only been two or three such cases out of the thousands of people who were part of the trials. Therefore, you cannot say they are because of the vaccine. She added it would be a different matter if many more cases emerge when the vaccine is administered for regular use. That is not the case at the moment.

Kang also said she disagreed with Professor T. Jacob John’s view that the Special Expert Committee has bent over backwards to accept the Oxford vaccine data. She does not believe Oxford has been shown special favours.

In The Wire interview Kang was also questioned the way both COVID-19 vaccines have been cleared in India. She said: “We have got a real communication problem. We need to do a lot more to convince people we have done the right thing. The pandemic no doubt creates urgency but if we are to use vaccines we need to build trust.”

Asked whether the DCGI, when he cleared the vaccines, should have followed the practice of the MHRA in Britain and the FDA in America and answered questions Kang said: “All government authorities should be more available to answer questions”. She added that “the more open and transparent we are will make all the difference in building trust.”

Finally, asked whether the names of members of the Subject Expert Committee and the National Expert Group on COVID-19 should be made public, Kang said: “I can’t think of reasons why their names are not in public”. She added one possible reason could be to protect them from pressure and questioning. When it was pointed out that experts should be willing to be questioned and to defend their decisions, Kang said she hoped, “One day questions would be welcome.”