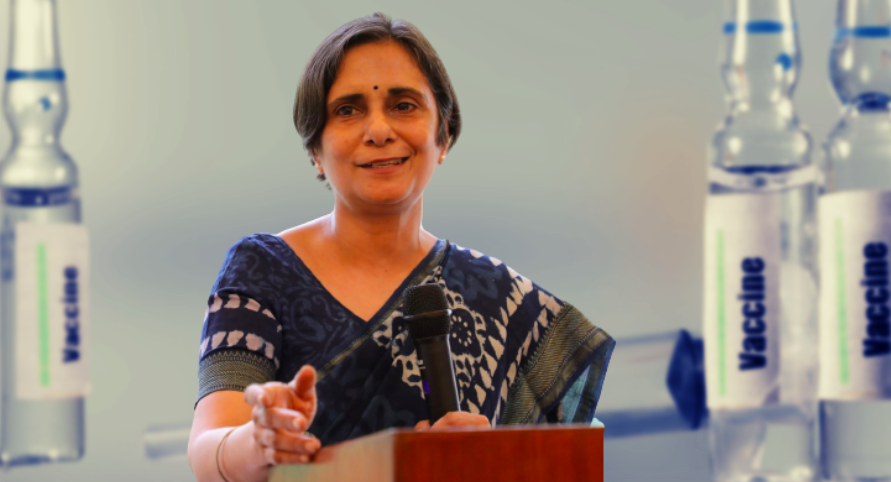 An illustration of Dr Gagandeep Kang with vaccine vials in the background. Photos: Twitter and Reuters

New Delhi: India’s method of green-lighting two COVID-19 vaccine candidates is not only mired in a questionable process and a curious choice of words, it could also have far reaching effects in how vaccines are viewed, Gagandeep Kang has said.

Indian authorities have, over the last weekend (January 1 and 2) approved two vaccines for administration. The first was ‘Covishield’, developed at the Oxford University with AstraZeneca and the second, Bharat Biotech’s ‘Covaxin’.

In an interview with Times of India, Kang, who is the vice-chair of the board of Coalition for Epidemic Preparedness Innovations and a professor at the Wellcome Trust Research Laboratory at the Christian Medical College at Vellore, has said that she is quite confused by both the approvals.

While controversy has surrounded the Bharat Biotech vaccine since it was first announced, Kang says that even the process of approval followed for the AstraZeneca-Oxford vaccine is confusing.

From the time when vaccines began going into trial across the world, Kang has appeared widely on Indian media channels – including at The Wire – seeking to shed light on a process otherwise unfamiliar to most, with interviews and explanatory pieces.

Her latest interview, Kang expresses blank dismay with the language used by the Drug Controller General of India (DCGI) while announcing approval to the two vaccines. The DCGI heads the department of the Central Drugs Standard Control Organisation which deals with approvals for drugs and vaccines.

“I can understand what they are saying about the Covishield vaccine and then they have this very complicated language for the Covaxin vaccine. The DCGI has actually quoted that language, but its approval for both of the vaccines is identical,” said Kang.

She also said that approval for a vaccine (in this case, Covaxin) in a “clinical trial mode” is something she has not seen before in a career spanning several decades.

The Wire‘s Vasudevan Mukunth, has also highlighted that the language used by DCGI Dr V.G. Somani in his announcement on January 3 is “not found in the New Drugs and Clinical Trials Rules 2019.”

Somani announced that the expert panel reviewed safety and immunogenicity data for the two candidates “for grant of permission for restricted use in emergency situation in public interest as an abundant precaution, in clinical trial mode, to have more options for vaccinations, especially in case of infection by mutant strains”.

Kang in the interview expresses surprise as to how a vaccine which is already on clinical trial could be approved for use in the same mode.

Questions also arise as to the legal stand of receivers of such a vaccine, considering that trial participants are distinct from those signing up to be administered a vaccine.

Even the very limited data made available on exactly what basis the two vaccines were approved has not been transparent, Kang has said.

While vaccine developers like Pfizer, Moderna, Gamlaya and AstraZeneca have been submitting data to regulators of each country, they have been simultaneously submitting the same findings to peer-reviewed journals for publishing. Thus, Kang cites, the Indian Council of Medical Research (ICMR), the apex body in India’s medical response to COVID-19, is well poised to publish Covishield data – and how it helped the regulator to arrive at approving it – in its own journal.

“It has already done that for many papers that it has published, like the hydroxychloroquine one, the observational study they had and many others,” Kang said.

In the absence of data to reflect efficacy of Covaxin, Kang questions how the conclusion was arrived at that the “vaccine required two doses,” especially considering that phase 3 trials which determine efficacy only began in November 2020.

Kang also points out that what is being labelled as a ‘phase 2/3’ study by India in the case of Covishield is actually a phase 2 study anywhere else in the world.

The DCGI statement, says Kang, depends entirely on the source of the vaccine, i.e. AstraZeneca, for data. “They have said that they are looking at 70% efficacy [Somani actually said the efficacy was 70.42%] which is pretty much what the UK regulator did even though we know that in the dosing schedule [a full two-dose regimen] that is proposed for India and that has been tried for India, the actual efficacy is about 62%. That’s fine as long as it is over 50%,” she says.

Somani, notably, did not clarify the intervals between shots of Covishield at his announcement.

Notably, for Covaxin, no such numbers exist. The Wire Science had reported on Bharat Biotech’s claim of 60% efficacy within days of beginning phase 3 trials. The company has not followed this claim up with actual data from the trials.

The overwhelming lack of transparency on fronts ranging from how the approvals were decided upon, who decided upon them, how the vaccines will impact health and other parameters among takers have dented an essential bridge that needs to exist between consumers, makers and the authorities in the process – trust.

“How are we different from Russia and China? I really don’t have an answer if anyone asks me that question,” says Kang. Russia’s vaccine Sputnik V was approved in a quick, questionable process.

The greyness of the approval process, feels Kang, is a feather in the cap of those who have been anti-vaccination (often with disastrous consequences).

“Essentially you are handing people who are anti-vaccine, anti-science a weapon that they can use. It is horrendously hard to think of why experts would think that this was a good way to go,” she says.