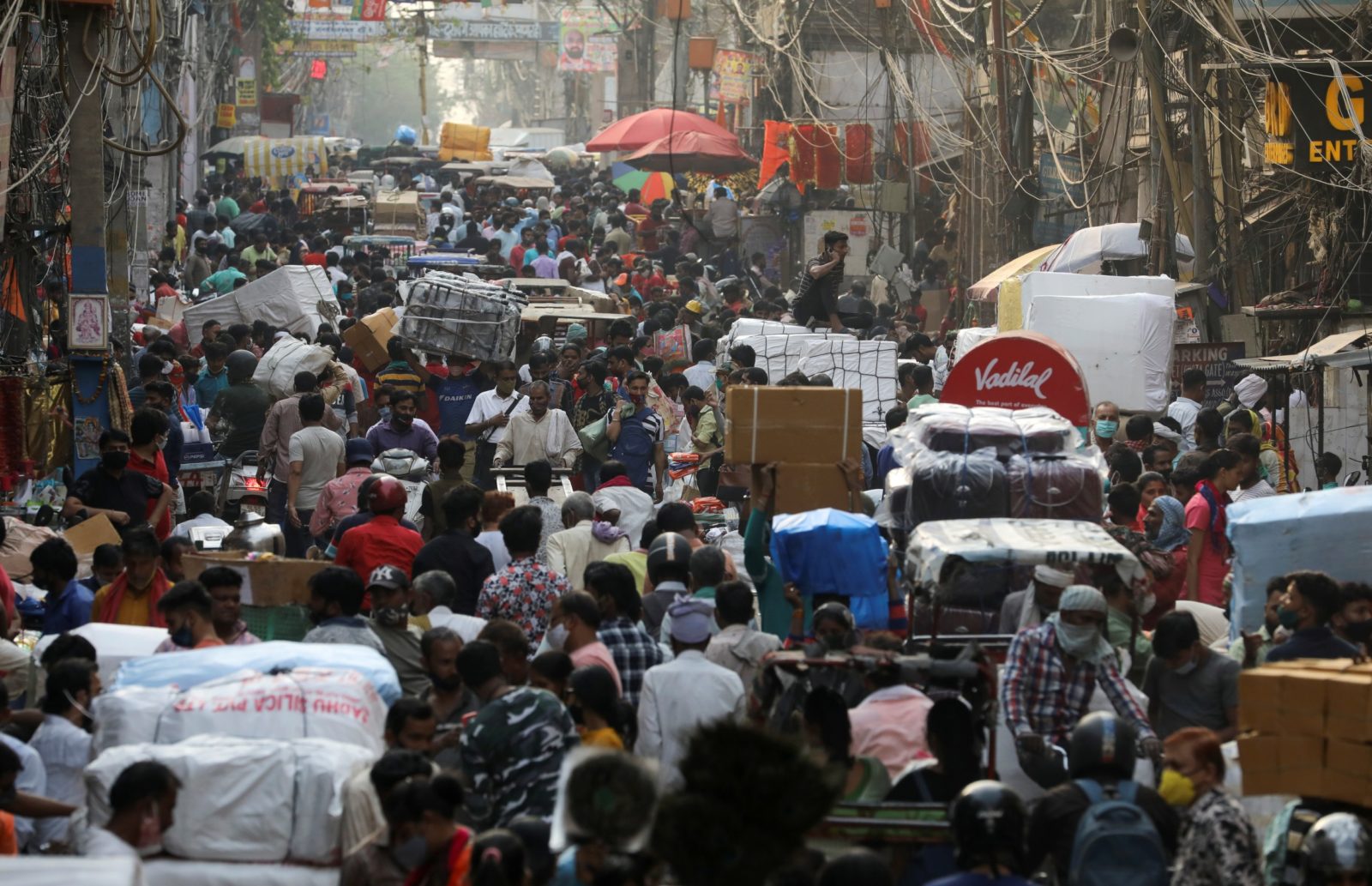 People walk at a crowded market amidst the spread of the coronavirus disease, in  the old quarters of Delhi. Photo: Reuters/Anushree Fadnavis

New Delhi: India reported another record single-day rise of 1,84,372 new coronavirus infections on Wednesday morning, pushing the total tally of cases to 1,38,73,825, while the active cases surpassed the 13-lakh mark.

Registering a steady increase for the 35th day in a row, the active cases increased to 13,65,704, comprising 9.84% of the total infections, while the national COVID-19 recovery rate has dropped to 88.92%.

The number of people who have recuperated from the disease surged to 1,23,36,036, while the case fatality rate has further dropped to 1.24%, the data stated.

India on Tuesday said it will fast-track emergency approvals for COVID-19 vaccines authorised by Western countries and Japan, paving the way for possible imports of Pfizer, Johnson & Johnson and Moderna shots.

Also read: As Demand for COVID-19 Tests Rises, Labs in Delhi and Mumbai Are Running Out of Kits

The move, which will exempt companies from carrying out local safety trials for their vaccines, follows the world’s biggest surge in cases in the country this month.

On Tuesday, Maharashtra, which accounts for about a quarter of the country’s cases, said it would impose stringent restrictions from Wednesday to try to contain the spread.

India has the biggest global vaccine manufacturing capacity and had exported tens of millions of doses before its own demand skyrocketed and led to a shortage in some states.

The jump in India‘s infections, for which health minister Harsh Vardhan acknowledged widespread failure to heed curbs on movement and social interaction, has prompted calls for the government to cancel huge public events.

Still, hundreds of thousands of devout Hindus are set to bathe in the Ganges river on Wednesday, the third key day of the weeks-long Kumbh Mela. Nearly a million bathed in the Ganga on Monday in the belief that its waters would wash away their sins. More than 100 tested positive for COVID-19 in random testing of around 18,000 attendees, media said.

Also read: Maha-Kumbh Mela Vs Tablighi Jamaat: Not Comparable, But Not For The Reasons Rawat Thinks

Similar concerns of a spike in cases were sparked by mass election rallies by all major political parties and opposition groups during polls in four states and one union territory.

The second wave of infections, which began in India‘s major cities, is increasingly spreading into the hinterland, where healthcare facilities are often rudimentary.

In Raipur, for instance, the main government hospital’s morgue was struggling to keep up, said joint director Dr Vineet Jain.

“All oxygenated and ICU beds are full in our set-up,” he told Reuters. “Around 50 dead bodies are laying, we have a shortage of space. Some private hospitals do not have space to keep the dead bodies so they also send the bodies to us.”

India is currently reporting around double the daily cases of the United States and Brazil, the two other worst affected countries, though its daily death toll is lower.

India‘s total infections rank after only the United States, having overtaken Brazil on Monday.