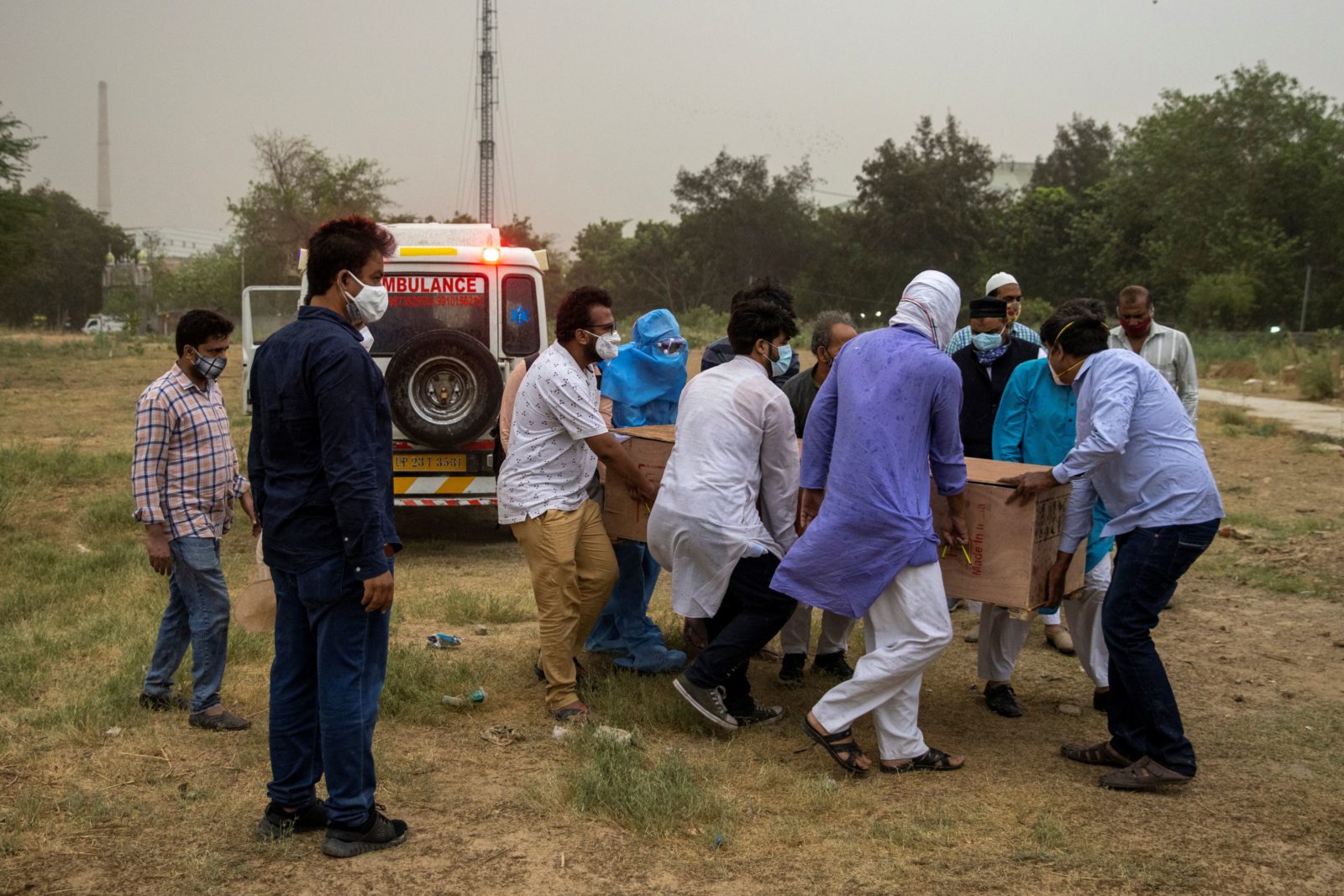 IMD Forecasts Monsoon Rains To Be Average in 2021

People carry the body of a man who died of COVID-19 from an ambulance for burial, New Delhi, April 16, 2021. Photo: Reuters/Danish Siddiqui

Bengaluru: India’s response to its new COVID-19 epidemic is going through an inflexion.

It was most prominent when the government stopped sharing its daily bulletin of adverse events following immunisation.

Next, Brazil’s vaccine regulator Anvisa said Bharat Biotech wasn’t following good manufacturing practices to make Covaxin, the ‘Made in India’ vaccine in the country’s two-vaccine inoculation campaign. Supporters of the government rose in its defence but the presence of problems was unmistakable, calling into question why India’s vaccine regulator didn’t notice them.

Then, since about two weeks ago, India went from being a vaccine exporter to importer. Complacent assumptions about low mortality started being overtaken by troubling reports of faulty official data and morgues and cemeteries running out of space. After admitting the country was producing oxygen for COVID-19 patients at full capacity for two days, the Union health ministry said it was going to import 50,000 metric tonnes of the gas.

Government officials first called rapid approval for foreign vaccines a “hare-brained idea” – days before Prime Minister Narendra Modi announced a policy for exactly that. And now, nearly a week after the Kumbh Mela in Haridwar kicked off and thousands tested positive for COVID-19, Prime Minister Modi has said attendance at the Hindu festival should be “symbolic”.

“Even before Modi’s sudden realisation that attendance at the Kumbh could worsen the COVID-19 situation in India,” The Wire wrote, “other religious bodies had decided to call it quits. Seers of the Niranjani Akhada sect reportedly decided to leave the Kumbh Mela from April 17 because of the abrupt rise in infections in the state.”

New variants of the novel coronavirus and a national population that for the most part has slunk back into complacency have started taking the Indian government’s plans apart at the seams. In the 24 hours until the morning of April 17, India reported 2.34 lakh new COVID-19 cases, extending its “more cases than before” streak into its ninth day. The country also reported 1,341 deaths to the diseases over April 16.

A report published by The Lancet COVID-19 Commission’s India task force states that “the geographic contours of the second wave closely mirror those of the first wave, though with a deeper penetration into tier 2 and tier 3 cities.” The authors also noted that the second wave has been more “geographically clustered”: “The number of districts comprising the top 50% has dropped from over 40 at the time of the last peak, to less than 20 currently”.

For example, according to Times of India, the country’s four worst-hit cities are in Maharashtra; the next two are Lucknow and Bengaluru. Of the four Maharashtra cities, Nashik is reportedly the worst off, with 46,050 cases per million population, followed by Nagpur, Pune and Mumbai in that order.

For another, as The Wire has reported, “There are currently 13,546 active COVID-19 cases in Uttarakhand” – where the Kumbh Mela has been held since April 12, with almost 3 million people in attendance. “On April 4, this number was 837.” In Haridwar, ground zero of the festival, officials reported over 1,700 cases last week. At the same time, state Chief Minister Tirath Singh Rawat said the Ganga river’s “blessings” would eliminate the virus from the place.

The situation is possibly direr in neighbouring Uttar Pradesh, where Lucknow has been reporting 11,987 cases per million population. And while Chief Minister Yogi Adityanath has asked for at least 1.5 lakh RT PCR tests to be conducted every day, Economic Times reported that some private testing labs, including Dr Lal Path-Labs and SRL Diagnostics, have “orders from the administration to not test”. Other labs said they had come up against logistical constraints as a result of which they could only test samples collected at hospitals.

On the healthcare front, India has been struggling to maintain the supply of hospital beds and oxygen gas for critical ill patients. There have been reports of shortage of the antiviral drug remdesivir, whose approval the Indian drug regulator hasn’t rescinded despite large clinical trials showing that it does not improve outcomes on major indicators like survival.

The Union health ministry has also been scrambling to patch its vaccine shortage. The government first denied this problem existed before suddenly announcing earlier this week that it would approve vaccines made and tested elsewhere after a seven-day bridging trial involving a hundred participants. It has thus far administered nearly 120 million doses of the two vaccines in its drive, Covaxin and Covishield.

Bloomberg Quint has reported that the government would offer Bharat Biotech a grant of Rs 65 crore to help increase its production capacity to 10 crore (or 100 million) doses by September this year. Earlier, Adar Poonawala, CEO of Serum Institute, Pune, which manufactures Covishield, had said his company would need Rs 3,000 crore to increase its production beyond 100 million doses a month.

The outlet also reported that the government would give Maharashtra-run Haffkine Biopharmaceutical Corp. Rs 65 crore and six months to get its facility ready to make 2 crore doses a month, and support Immunologicals Ltd. and Bharat Immunologicals and Biologicals Ltd. to ready their facilities to produce up to 1.5 crore doses a month, also by September 2021.