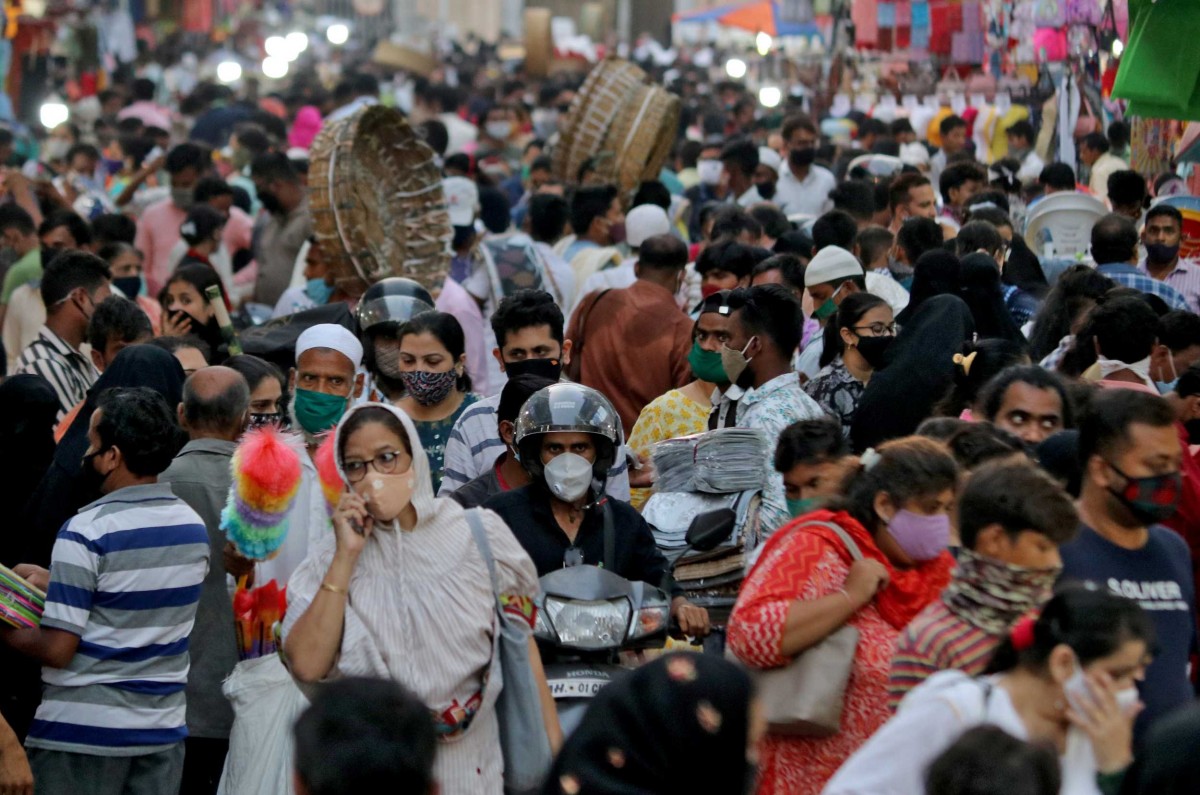 People in protective masks crowd a marketplace amid the spread of COVID-19 in Mumbai, March 22, 2021. Photo: Reuters/Niharika Kulkarni/File Photo.

New Delhi: India added over one lakh coronavirus infections in just two days with 53,476 new cases in a span of 24 hours, the highest single day rise so far this year, pushing the nationwide COVID-19 tally of cases to 1,17,87,534, according to the Union health ministry data updated on Thursday.

The active caseload registered an increase for the 15th day in row and was recorded at 3,95,192 comprising 3.35% of the total infections, while the recovery rate has further dropped to 95.28%, the data stated.

The daily rise in infections was the highest recorded in 153 days. The death toll increased to 1,60,692 with 251 new fatalities, the data updated at 8 am showed.

The number of people who have recuperated from the disease surged to 1,12,31,650, while the case fatality rate has further dropped to 1.36%, the data stated.

According to the health ministry, a new “double mutant” variety of the virus has been found in India, a matter of “grave concern”. This variant of SARS-CoV-2 was detected in Delhi, Maharashtra and some other places in addition to the three “variants of concern” – first noticed in the UK, South Africa and Brazil – that have been found in at least 18 states and union territories.

The ministry, however, said it could not be sufficiently established yet if these variants were behind the recent spike in COVID-19 cases in some states.

National Centre for Disease Control (NCDC) director S.K. Singh said 771 cases of variants of concern (VOCs) have been detected in a total of 10,787 positive samples in 18 states and UTs which include 736 samples positive for viruses of the B.1.1.7 lineage.

Also, 34 samples were found positive for viruses of the B.1.351 lineage and one sample for the P.1 lineage.

In addition to these, some other variants, including the double mutant one, have been found in some states and UTs such as Maharashtra and Delhi and need to be further analysed and investigated for establishing any epidemiological correlations, he said.

Genomic sequencing by the Indian SARS-CoV-2 Consortium on Genomics (INSACOG) and epidemiological studies are continuing to further analyse the situation.

Also read: India’s Genome Sequencing Program Is Finally Good To Go – So What’s the Hold Up?

Singh said there are various reasons behind a surge. States having a larger pool of susceptible population are prone to witness a rise in cases. Whenever the susceptible population will lower their guard and not follow COVID-19-appropriate behaviour, they will get the infection, be it the normal virus or the mutants, he added.

“Currently, the SARS-CoV-2 variants detected in the community have been prevalent for last 6-8 months and they are distributed in over 70 districts of our country… Various states that are witnessing a surge in cases have revealed different mutation profile, post-sequencing,” Singh told a press conference in Delhi.

Genomic variants of various viruses are a natural phenomenon and are found in almost all countries, the health ministry highlighted in its statement.

Genome sequencing and analysis have been carried out on samples from arriving international travellers, contacts of those positive for VOC and community samples from most of the states at INSACOG partner laboratories, it stated.

Gujarat, Pune, Delhi and Haryana have banned public celebrations of Holi, and Mumbai has placed restrictions on the festivities.