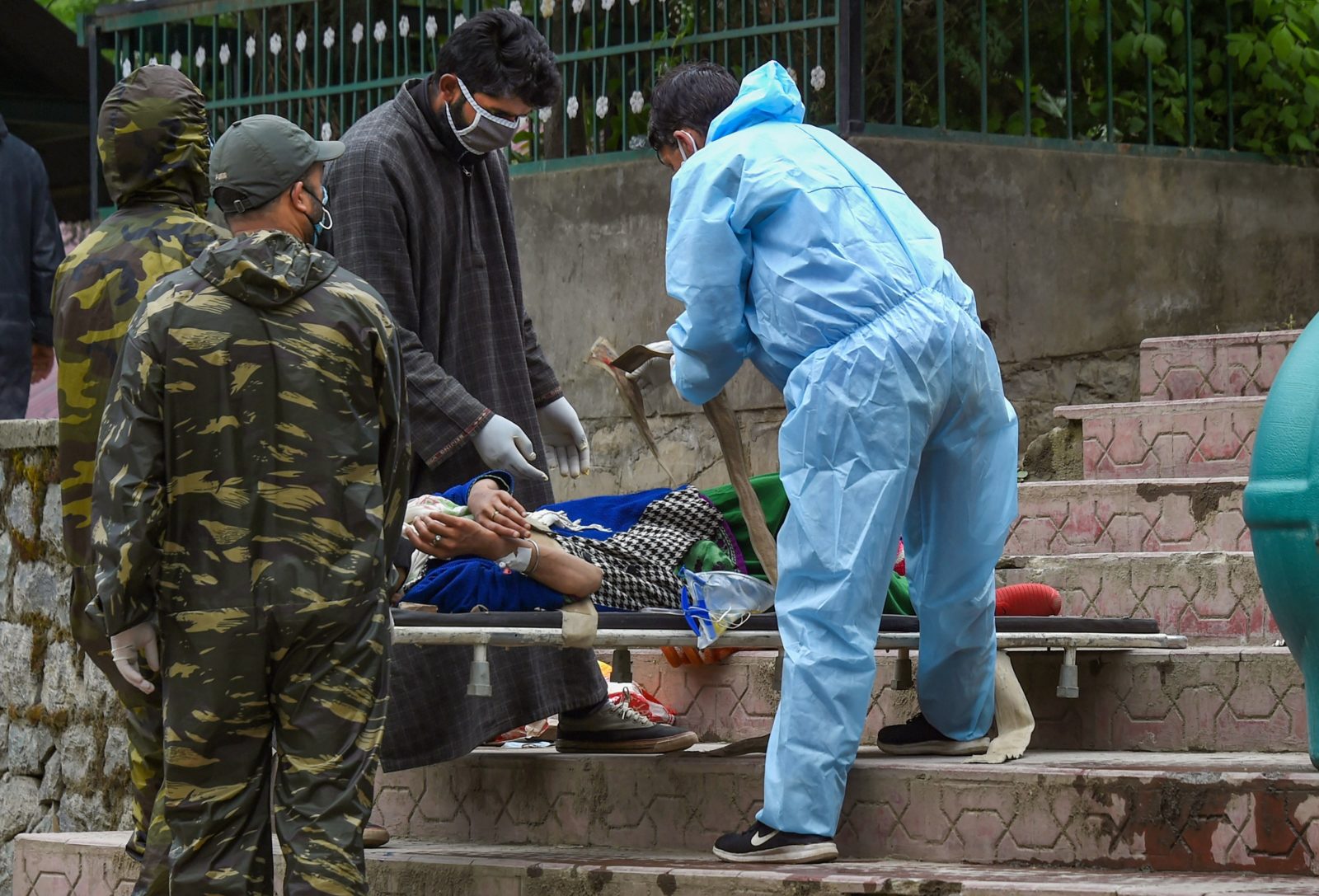 The Novel Coronavirus Story so Far, From Virology’s Point of View

Featured image: A suspected COVID-19 patient is being shifted to a hospital ward, in Dalgate, Srinagar, Monday, May 18, 2020. Sixteen persons, including five doctors, tested positive for COVID-19 in Jammu and Kashmir taking the total number of positive cases in the Union Territory to 1199. PTI/S. Irfan

Srinagar: With eight COVID-19 deaths and more than 350 people testing positive for the infection in less than a week, the coronavirus graph is slowly rising in Kashmir, throwing up new challenges for health authorities.

From expecting mothers to doctors, patients admitted to hospitals for routine procedures and policemen, the fresh cases since Friday have health authorities worried, given the infection curve was seen flattening for the past few weeks.

“This is worrying,” said a doctor at Government Medical College (GMC) Srinagar. “I won’t hesitate to say that we are staring at the COVID-19 peak and the new phase of the lockdown could be even more challenging.”

The region has seen the daily positive cases go above 100 on two occasions – May 16 and 18 – since the first case was reported in Kashmir on March 18.

Southern Kashmir’s Anantnag district, which made headlines for the death of three pregnant women last month, saw 13 expecting mothers testing positive for the infection on a single day on May 16.

While eight of them were from the COVID-19 red zones, the other seven patients were from areas which haven’t reported any case till date, leaving doctors baffled.

But a common link among them could throw some light on how these women contracted the infection. A health official in the district said at least 10 of them visited the maternity and childcare hospital, Anantnag for check-ups.

“It is too early to conclude whether they contracted the infection from the hospital, but this aspect can’t be ruled out,” said the official. None of these patients have any travel history.

Another official at the directorate of health said at least 31 cases of pregnant women testing positive for coronavirus have been reported across the Valley. Most of them have visited hospitals, maximising chances of the spread of the infection. In some cases, doctors and health workers had to be sent into quarantine.

In Anantnag alone, around 20 doctors were quarantined after they came in contact with pregnant women who had COVID-19.

Under new norms, the J&K government has decided to test all expecting mothers. Districts health authorities have been asked to maintain a list of the women in the advanced stages of their pregnancy.

“We have so far tested more than 3,400 pregnant women across Kashmir, including more than 500 women from Anantnag,” said the health official.

“Though the situation is far better in other districts, the changing situation could throw up more challenges in the days to come,” said the health official.

The government has, however, come under criticism for failing to set up a separate antenatal care facility in most districts for pregnant women who are either suspected to have COVID-19 or have tested positive for the infection.

The Valley has so far witnessed 17 of the 19 COVID-19 deaths in J&K. Three persons died of the infection last Monday, in what was the highest single-day mortality rate.

The deceased included a young woman from Srinagar who was operated on at the Shri Maharaja Hari Singh (SMHS) hospital for submandibular abscess and mediastinitis, following septic shock.

The 29-year-old was admitted in the Surgical Intensive Care Unit when she tested positive for the infection. She was immediately shifted to Chest Disease Hospital, the designated COVID-19 facility, where she passed away on May 17.

“While all the facilities are available under one roof in SMHS, how can a septicemia patient on ventilator, a brain haemorrhage patient and a thyroid malignancy (all COVID-19 positives) be shifted to a Chest Disease Hospital meant only for respiratory ailments,” Ashraf asked.

Watch: How to Wear and Remove a Mask Properly

Another doctor said medical workers, and not bureaucrats, should be part of the decision-making as far as management of COVID-19 patients was concerned.

“Unfortunately, bureaucrats are running the show and doctors at the helm too have maintained a silence,” said the doctor.

Doctors too have borne the brunt of the disease in Kashmir.

On May 18, five doctors tested positive for COVID-19 in Srinagar hospitals – four of them, including three ENT specialists, had treated the young woman who died later.

Another doctor was posted at SKIMS Medical College Bemina, the designated COVID-19 institute. He was scheduled to go on leave to spend Eid with his family but had voluntarily opted for COVID-19 duty.

These fresh cases have raised questions about the safety protocol adopted by hospitals for frontline workers.

A total of 13 doctors, three nurses and five healthcare workers have been infected with the virus in J&K.

A senior medico at the SMHS hospital said doctors treating non-COVID patients were not provided full PPE gear, and so the ENT doctors who treated the deceased woman were only wearing masks and gloves.

He said the doctors testing positive for the infection at non-COVID hospitals was the sign of things which could hit the health system in the days to come.

J&K’s response to the pandemic, the doctor said, would largely depend on the safety of doctors. “If we can’t protect our doctors, half the battle is lost already,” he said.

Dr Muhammad Salim Khan, nodal officer for COVID-19, said people returning from outside the UT and testing positive for the infection have led to a surge in the infection cases.

More than 100 persons, most of them from south Kashmir, who were evacuated during the past week, have tested positive – a major challenge to the government’s plan to prevent the spread of COVID-19.

“There is no room for complacency,” said Khan.

With 78 COVID-19 cases, the district police line in Anantnag has emerged as a new coronavirus hotspot. An official said the first case here was reported two weeks ago, when a special police officer was tested positive for COVID-19.

A few days later, eight force personnel tested positive, followed by another 14 cases at the line which comprises J&K police and armed police reserve battalion. Last Monday, 55 policemen including an officer of the armed police tested positive for coronavirus.

“Of the 78 cases, 23 are from the district police while the remaining cases are from the armed battalion,” said a police official.

He said the policemen who tested positive have been shifted to a quarantine facility and health authorities have started contract tracing.

Anantnag reported the first COVID-19 case on April 15. It was the last district in Kashmir to report infection cases, but now has the highest number of cases in J&K, with more than 230 persons testing positive.