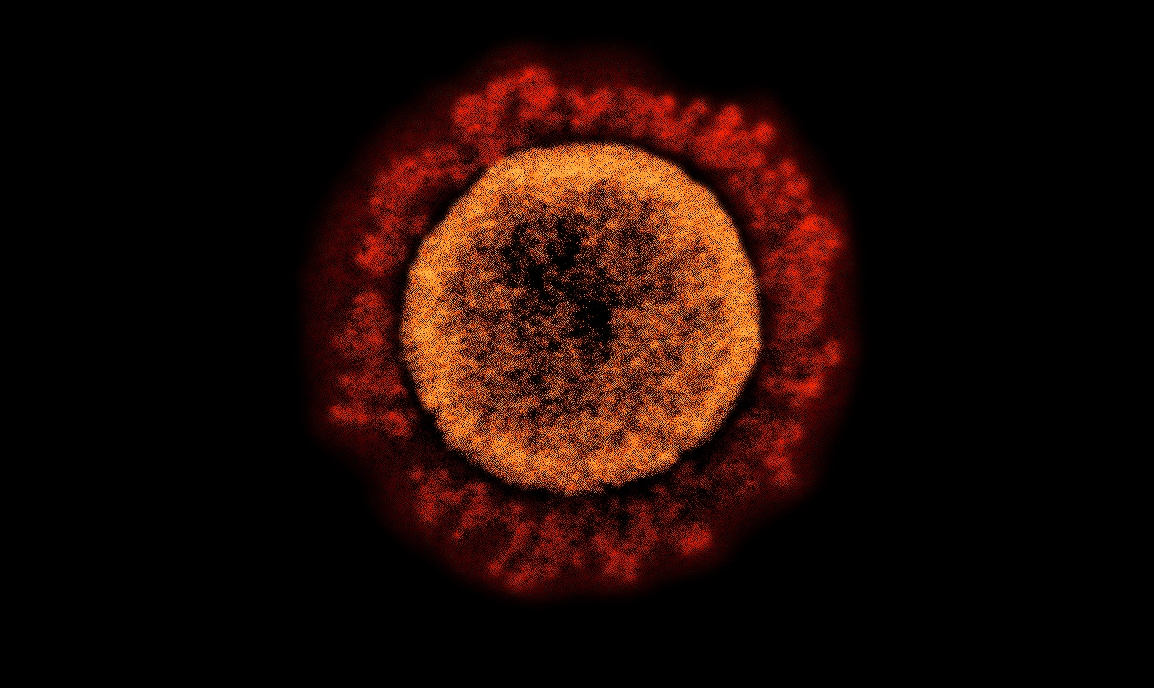 A transmission electron micrograph of SARS-CoV-2. Photo: niaid/Flickr, CC BY 2.0

New Delhi: The WHO reported a drop in the number of new weekly cases worldwide in its February 8 epidemiological update. It’s the first time this has happened since the omicron variant emerged in November 2021. Yet, the UN health body has continued to warn that the variant won’t be the end of the pandemic.

“It is still dangerous to assume that omicron will be the last variant, or that we are in the endgame of the pandemic,” WHO director-general Tedros Adhanom Ghebreyesus said at an executive board meeting on January 24.

But how will the pandemic end?

On February 11, the UK Scientific Advisory Group for Emergencies (SAGE) published four likely scenarios that could unfold in the next 12-18 months.

The scientists behind the effort have classified the four scenarios as ‘best case’, ‘central optimistic’, ‘central pessimistic’ and ‘worst case’. None of them rule out the possibility of new variants.

But in the ‘best case’ scenario, a new variant wouldn’t have any major antigenic evolution. That is, its properties wouldn’t be very different from an existing strain. Also, it wouldn’t have any gains in transmissibility (like omicron did) or cause severe disease (like delta).

The variant’s immune escape potential – i.e. its ability to escape immunity granted by vaccines or natural infection – would be “minimal”. In all, it will trigger only minor regional outbreaks.

The ‘central optimistic’ scenario is different. “The general pattern is of annual seasonal infection with good and bad years, the latter with high transmissibility and intrinsic severity similar to delta,” the SAGE project said about this scenario. So scientists will have to regularly update existing vaccines to counter the newer variants. Meanwhile severe illness will be confined to the elderly.

However, something major could happen: because of people’s excessive use of antiviral drugs, the novel coronavirus may develop resistance to them.

The resulting number of cases and deaths would be comparable to that during the omicron wave.

The ‘central pessimistic’ scenario is something worse. There will be more cases worldwide. The dominant variant will also have greater immune-escape potential, and have disease severity comparable to that of the delta variant.

The wave(s) may also come more than once a year. “Existing immunity and updated vaccines will continue to provide good protection against most severe outcomes,” SAGE projected. Severe outcomes are hospitalisation and death. Antiviral resistance will be “widespread”.

Changes in the virus will also become unpredictable. This, in turn, will alter the age profile of severe disease and mortality. (Currently, elderly and immune-compromised individuals are the most vulnerable.) “Widespread” annual vaccination with constantly updated vaccines will be required, while the existing crop of vaccines may fail.

Which one will play out?

So which of the four scenarios is most likely to play out? The Wire Science reached out to a few experts.

“This virus has surprised us enough,” said Giridhara R. Babu, head of lifecourse epidemiology at the Indian Institute of Public Health, Bengaluru. “While we can optimistically expect for the first two scenarios, it is prudent to step up surveillance for early detection and response to the third and fourth scenarios.”

Babu also pitched for more focused genome-sequencing to track the virus’s evolution. Only sequencing can reveal the presence of newer variants, and it needs to be conducted even if an outbreak has peaked.

Tarun Bhatnagar, a senior scientist with National Institute of Epidemiology, said it wouldn’t be safe to bet on any particular scenario. The bottom line, to him, is variants. Only they can decide the pandemic’s trajectory. “And variants just emerge randomly,” he said.

This said, he did set out two possibilities. Currently, there are countries that have vaccinated large chunks of their populations and those that haven’t. New variants can emerge from either group, and not just the latter, Bhatnagar said.

The virus is under tremendous pressure to mutate in regions where a higher fraction of the population has been inoculated. And if a variant emerges from such countries, it will have greater potential for immune-escape. This is what happened with the omicron variant. Fortunately, it couldn’t cause severe disease.

But the chances of new variants emerging are more significant in places where the transmission is high, thanks to poor vaccination rates. A higher transmission rate will allow the virus to mutate more quickly, without any pressure. And the more mutations it accrues, the more chances it will have to become a new variant.

“To these uncertainties, add another one, of disease severity due to a new variant.” Bhatnagar added that it would be too difficult to predict all these attributes.

Is there a silver bullet?

It is a cliché now to say that vaccination rates have to pick up in those countries that are currently lagging behind. Not doing so will mean a big risk – for the people in these countries and for people everywhere.

“A booster dose increases vaccine efficacy … against severe disease to above 75% for all vaccines for which data are available, with this effect maintained up to six months after the booster dose,” the WHO last weekly update said. However, the dose’s efficacy against infection – i.e. preventing a person from getting infected at all – dropped after three months, it added.

(The primary goal of all COVID-19 vaccines is to prevent hospitalisation and death, and not to prevent infection per se.)

But even as the omicron variant’s wave starts to wane, there is no consensus among medical researchers about whether booster doses might be the silver bullet that ends the pandemic.

According to Bhatnagar, there isn’t much evidence to avail booster doses to the entire population of a country like India. A vast majority of people in India have either been fully vaccinated or have had a prior infection. Both grant (temporary) immunity.

There has also been talk of developing variant-specific vaccines. “But this will keep us always behind the virus,” Bhatnagar said. By the time a new vaccine is designed, tested in a trial and rolled out, the variant’s outbreak will have crossed its peak, rendering the vaccine outdated.

Instead, Bhatnagar said, the answer might be a pan-sarbecovirus vaccine. Scientists and vaccine firms are working to develop a shot that can protect against infections of all coronaviruses. (Before the novel coronavirus, the SARS and MERS outbreaks in 2003 and 2012 were caused by different coronaviruses as well).

‘Sarbecovirus’ is short for SARS betacoronavirus.

WHO officials have also backed such an idea. The body’s chief scientist Soumya Swaminathan called it a “preferred approach” for the future in a press conference on January 18, 2022. “Variant-specific vaccines is one approach, but then the better approaches may be to have multivalent vaccines or ideally to have a pan-coronavirus vaccine,” she said.

But not everyone thinks a pan-sarbecovirus vaccine could be realistic, at least at this time. “One single vaccine protecting against all or most possible variants is a holy grail that is not quite in sight,” Rajeeb Dasgupta, a professor of community medicine at Jawaharlal Nehru University, told The Wire Science.

“But exposure to natural infections may increasingly play a greater role against future variants.”

Finally, all four of SAGE’s scenarios and all three experts – Babu, Bhatnagar and Dasgupta – agreed that masks are going to remain important. “I would equate masks with seat belts and helmets,” Bhatnagar said. “Use them for your personal protection.”

“Maybe you can do away with them in outdoor settings, if a place is not [very] crowded and if the person [you’re with] is not elderly or is otherwise vulnerable,” he added. “But in indoor environments that are crowded, masks are going to remain necessary.”