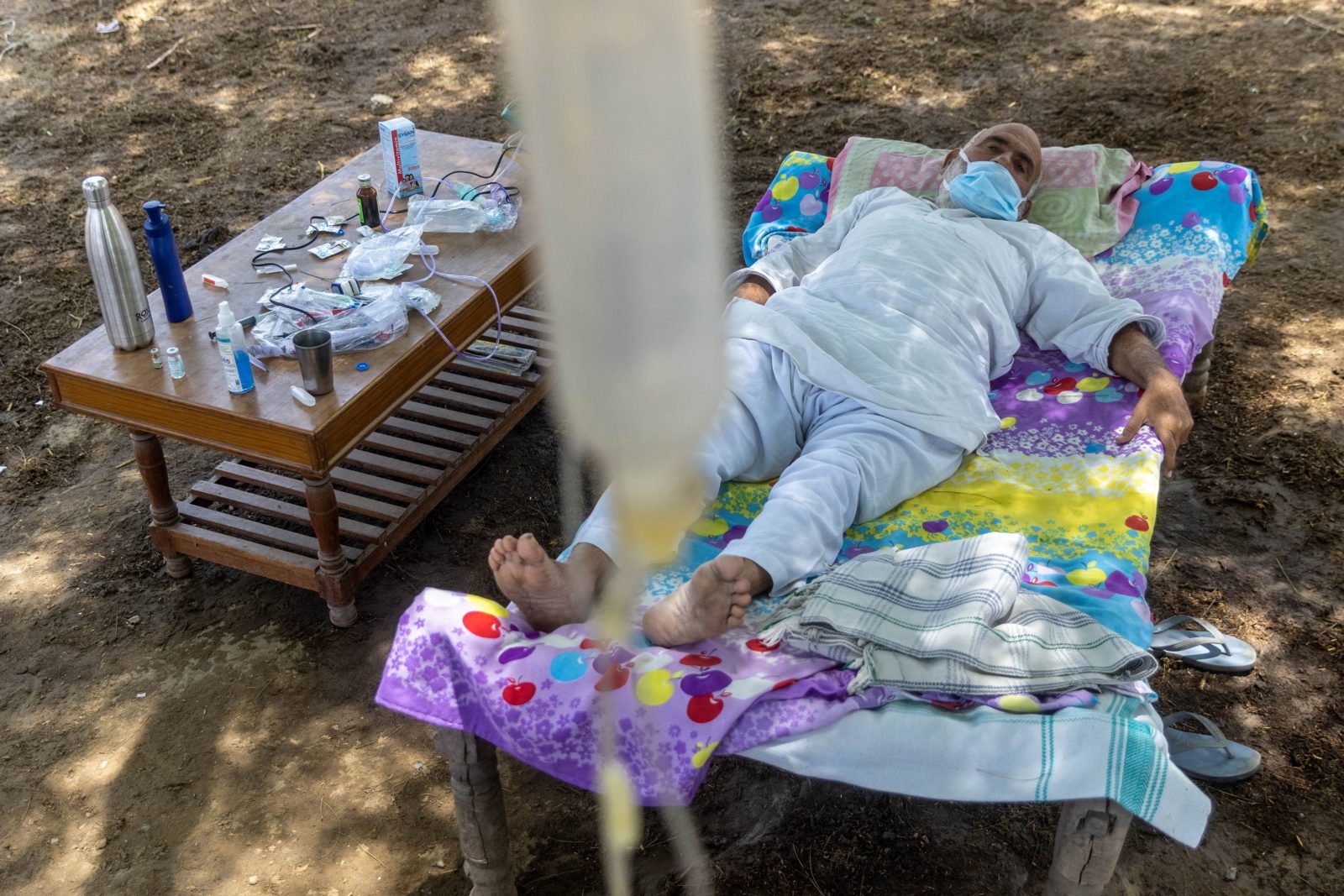 Harveer Singh, who is suffering from COVID-19, rests on a cot as he receives treatment at a makeshift open-air clinic in Mewla Gopalgarh, Uttar Pradesh, May 16, 2021. Photo: Reuters/Danish Siddiqui

Bengaluru: The Office of the Principal Scientific Adviser (PSA) to the Government of India, K. VijayRaghavan, has issued a new advisory emphasising the roles of “masks, distance, sanitation and ventilation” to end the country’s COVID-19 epidemic.

Over the last few weeks, VijayRaghavan has been sharing similar messages from his official Twitter account, most recently on May 15. The advisory reflects many of his suggestions, including following COVID-appropriate behaviour, maintaining distances and ventilating rooms.

It’s noticeable that this advisory has shown up in the middle of the country’s second wave – instead of before the first wave, which began around February 2020.

What to do but not what not

The advisory begins with a recap of how the virus is transmitted: “Even one infected person showing no symptoms can release enough droplets to create a ‘viral load’ that can infect many others,” it says. “Symptoms can take up to two weeks to appear in an infected person, during which time they may continue to transmit the virus to others. Some people may never show symptoms and still transmit the virus.”

Next, it briefly discusses the mechanics of aerosol versus droplet transmission, starting with: “Aerosols and droplets are the key transmission mode (sic) of the virus.”

Early last year, when the pandemic was just getting underway, the WHO refused to admit that particles of the novel coronavirus could be transmitted through aerosols.

Because droplets are bigger, they typically settle down to the ground within six feet, or two metres – a point that the advisory also makes. Fluid dynamics expert Ronak Gupta wrote for The Wire Science in May 2020 that this figure is based on a study conducted with tuberculosis patients in the 1930s. This is also where the suggestion to maintain a distance of six feet from people around you comes from.

The WHO didn’t change its mind until 200 scientists expressed their concerns in an “unusually public outcry”, and forced the international body to reconsider the evidence for aerosol transmission.

The advisory also reminds readers of the reality of transmission via surfaces. “Virus-laden droplets can survive on non-porous surfaces such as glass, plastic and stainless steel for a fairly long time,” it reads, and recommends that people regularly clean surfaces they touch often, like door-knobs and light switches, with bleach or phenyl.

Note that the US Centres for Disease Control (CDC) said last month that the chance of a person getting infected after touching surfaces is “1 in 10,000”. The PSA’s advisory doesn’t mention the relative unlikelihood of this mode of transmission, suggesting that it is as equally likely as the other two (droplets and aerosols).

The advisory also doesn’t advise against unnecessarily disinfecting certain surfaces. For example, Sumi Krishna has written about civic officials in Bengaluru spraying bleach on trees, roads and vehicle tyres, echoing reports of similar activities in other parts of the country. In the face of uncertainty about what to do, people have often done whatever they can – leading to what some have called ‘hygiene theatre’.

In one infamous incident in March last year, municipal officers in Bareilly forced a group of migrant workers to squat on the road and hosed them with a sodium hypochlorite solution.

Next, the advisory discusses masks and the risks of different masking strategies in different situations.

Wear a surgical mask, then wear another tight fitting cloth mask over it. If you do not have a surgical mask, wear two cotton masks together. Ideally surgical mask should be used only once, but when pairing, you can use it up to 5 times by leaving it in a dry place for 7 days after one use (ideally give it some sun exposure) and then reuse as double layer.

Its recommendation for work spaces is the same as in the first case, with the addition of air conditioners, thus ensuring both directed inflow and directed outflow.

Fourth, the advisory recommends “offices, auditoriums, shopping malls, etc.” install “roof ventilators and HEPA/regular filters” and that the people in charge be mindful of the filters’ service lives and replacement schedules. High-efficiency particular air (HEPA) filters are filters designed to remove at least 99.95% of particles that are 0.3 µm wide.

Finally, it makes similar recommendations for people travelling in crowded vehicles, that passengers should have as many opportunities as possible for fresh air to flow in a direction away from them.

The last part of the advisory deals with “community-level testing and isolation” in rural and semi-urban areas.

It also asks that “every person who tests positive should be given a certified N95 mask, or a surgical mask if this is not feasible, and advised isolated (sic) as per ICMR guidelines.”

Many behavioural economists have said that clear, simple and authoritative communication that encourages good behaviour vis-à-vis controlling the epidemic is always welcome. The Office of the PSA also released an advisory early last year stressing the importance of wearing masks, including a widely appreciated guidance (PDF) on how to stitch one’s own masks.

This said, the advisory’s timing is interesting because it coincides with some other significant pandemic-related communication events.

First, Tamil TV channels, especially those affiliated with the Dravida Munnetra Kazhagam, have been airing a two-minute long video in which Tamil Nadu’s new chief minister M.K. Stalin describes the proper way to wear a mask, to wash hands, the importance of staying indoors to the extent possible and of getting vaccinated as soon as possible.

Second, the CDC recently updated its guidelines to say people in the US who had received both doses of their vaccines needn’t have to wear masks in public. The update stoked some confusion among experts, but CDC director Rochelle Walensky said the agency’s decision was based on early reports that suggest the Pfizer-BioNTech and Moderna vaccines also significantly cut transmission. That is, people who have received both doses of either vaccine also become highly unlikely to be able to transmit the virus if they get infected.

Third, as a document that sticks to the ‘physical’ characteristics of the epidemic, the advisory doesn’t address what people without the resources whose availability it presumes – like room enough to maintain a gap of six feet, exhaust fans that open to meaningful air-streams or clean running water – can do to avoid getting infected.

Even if this criticism can’t be laid at the PSA office’s doorstep alone, the issues make up a significant point of difference between the government’s poor communication thus far and the lived realities of many lakhs of Indians, especially in rural parts, where the second wave is expected to surge next.

By not discussing what the government could have done better, differently or not at all, the advisory gives the impression that the pandemic’s future is in the people’s hands. However, the Indian and many state governments are already out of step with many of the recommendations.

For example, the advisory spends five pages on ventilating rooms properly – but many vaccination centres and hospitals around the country have become potential sites of new infections themselves: the queues are long, the rooms often crowded; in some instances, overcrowding forced healthcare workers to accommodate two people on each bed, sharing oxygen supplies.

For another example, the advisory suggests that air-conditioned trains and buses install HEPA filters. This demand is a far cry from the conditions in which many of these vehicles, but especially buses, currently operate – with torn seat covers, broken handles and guardrails and grime covering most surfaces.

There is no indication that VijayRaghavan or his colleagues have spoken up against these shortcomings before. VijayRaghavan himself has been silent in the face of many questions about his role in the government’s actions. For example, as Karan Thapar asked: “when Assam health minister Himanta Biswa Sarma said there was no need to wear masks in his state or when Uttarakhand Chief Minister Tirath Singh Rawat said faith in god and the power of the Ganga river would protect people from COVID-19”, what did VijayRaghavan say to them?

Prem Shankar Jha has pointed out that the government has maintained “two conflicting aims”, each undermining the other, since the pandemic began: one to avert a second wave and the other to extract political mileage. The PSA is a high office in the government: articulating the bare minimum of what needs to be done is necessary to further one set of aims. But what happens when he doesn’t push back against the other?