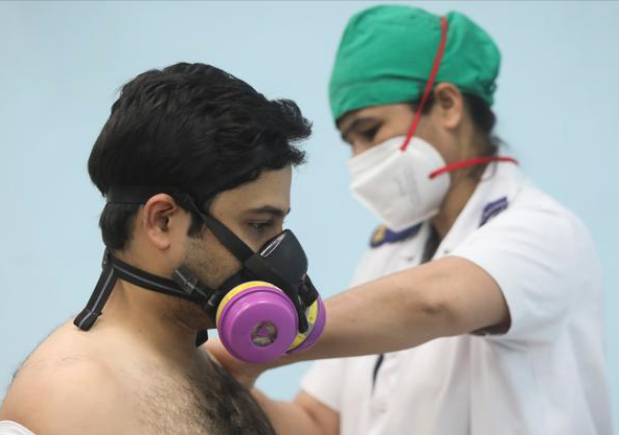 A healthcare worker receives a dose of AstraZeneca’s Covishield vaccine at a medical centre in Mumbai. Photo: Reuters/Francis Mascarenhas

Los Angeles: Prioritising who receives the limited supply of COVID-19 vaccines available can save lives and reduce the spread of the viral infection, according to a study.

Researchers from the University of California (UC), Davis in the US noted that while there is mostly universal agreement that older people should be prioritised for vaccination, debates are currently underway about giving priority to a variety of other groups.

“Prioritisation has benefits because people differ in at least two key ways – their risk of infection and the likelihood of serious consequences from infection,” said UC Davis professor Michael Springborn, senior author of the study published in the journal PNAS.

“We know that front-line essential workers have less capacity to socially distance and thus an elevated risk, while seniors are more seriously impacted by infection, said Springborn, adding that accounting for this substantially increases the benefits of vaccination.

The researchers modelled COVID-19 transmission rates and the optimal allocation of an initially limited vaccine supply in the US under a variety of scenarios.

They found that deaths, years of life lost and infections were between 17 and 44% lower when vaccinations targeted vulnerable populations – particularly seniors and essential workers – rather than an alternative approach where everyone is equally likely to be vaccinated.

“We also found that in regions where there was a faster increase in infections, and where there is less masking and social distancing occurring, targeting was even more important in avoiding those outcomes,” said study lead author Jack Buckner, a PhD candidate in the UC Davis graduate group in ecology.

The team identified that front-line essential workers should be a vaccination priority along with or shortly after seniors.

The researchers noted that policies that target based on both age and essential worker status substantially outperformed those that consider age only. They said prioritising essential workers versus seniors depends on the conditions.

For example, the researchers explained when there is a good supply of effective vaccines and the outbreak is relatively under control, targeting essential workers first to help reduce overall spread can be ideal.

However, if vaccine supply is limited and cases and deaths are surging, targeting seniors and the most vulnerable directly may be the better strategy, they said.

Previous studies have assumed that a given prioritisation strategy remains constant over time. The latest study uniquely allows for prioritisation to evolve as conditions change, such as when more people in certain groups become vaccinated.

“There is a substantial value to prioritisation, at least for the first few months of the vaccine rollout,” Springborn said.

“Once a large proportion of the most vulnerable people or the most likely to be exposed have been vaccinated, it becomes less important who gets it,” Buckner added.