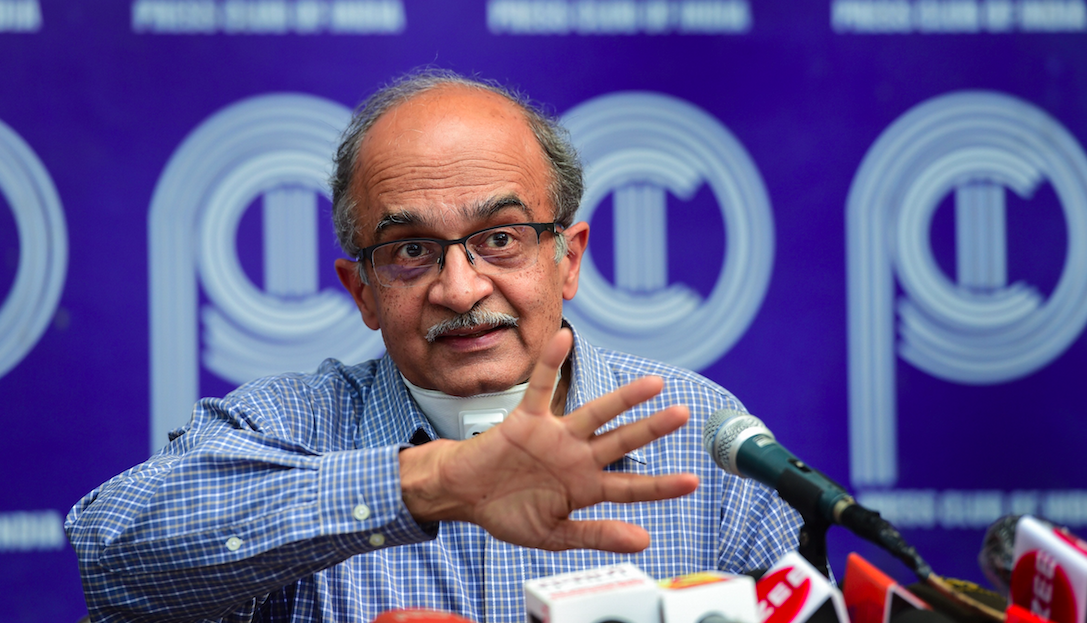 New Delhi: Lawyer and activist Prashant Bhushan, whose tweets expressing deep misgivings with COVID-19 vaccines met ith criticism on social media a day ago, expressed shock on Tuesday, June 29, at the fact that his tweets defending his position were flagged as “misleading” by the social media site.

Bhushan also claimed that he had been locked out of his account, i.e. blocked by Twitter from accessing and tweeting from his handle for 12 hours.

“This shows what I have said about the congruence of interests of big pharma and IT platforms to allow just one narrative,” Bhushan tweeted.

So Twitter flagged the tweet below where I have explained my reasons for being a Vaccine skeptic (with references) as ‘misleading’ & blocked my account for 12 hours. This shows what I have said about the Congruence of interests of Big Pharma&IT platforms to allow just 1 narrative https://t.co/lK8zjCuvjm

The tweet flagged ‘misleading’ contained images of an essay in which Bhushan defended his ‘anti-vaccine’ Twitter thread from June 28.

Bhushan, in his caption with the images, claimed that attempts had been made to “censor” his “contrarian views” but did not elaborate how this was done.

In the essay, which has since been published on a portal called Punjab Today TV, Bhushan holds forth on how the “vaccine frenzy” that has “taken over the world” is ignoring what he believes are alternate views. Among such views, Bhushan says, is “that the vaccines themselves could be promoting the emergence of new and more virulent strains of Covid.”

It’s hard to separate Bhushan’s stance from his decision to represent Jacob Puliyel petition in the Supreme Court asking for the manufacturers of Covaxin and Covishield to release the data from their phase 3 and bridging trials, respectively. As V. Venkatesan reported on May 17, 2021:

Jacob Puliyel, a former member of the National Technical Advisory Group on Immunisation, has filed a PIL petition in the Supreme Court seeking segregated data from the clinical trials for the vaccines that are part of the Indian government’s ongoing COVID-19 vaccination drive.

According to the petitioner, represented by advocate Prashant Bhushan, vaccines that haven’t been adequately tested for safety or efficacy have been awarded ‘emergency use’ approvals without the data being disclosed to the people. According to him, this act violates the basic norms of scientific disclosure and the guidelines with respect to disclosure of clinical trial data as laid down by the WHO and followed by the Indian Council of Medical Research.

Defending his stance as neither “anti-vaccine” nor “anti-science” – with an aside that he has a master’s degree in the philosophy of science – Bhushan put COVID-19 vaccines on par with tobacco vis-à-vis the harm they are capable of causing and the ‘vested interests’ out to hide it.

In his over-2,000-word article, Bhushan claims that children are largely unharmed by COVID-19 and that vaccines are harmful. However, he doesn’t mention or discuss studies to the contrary – and which have found that all vaccines currently in use around the world, and approved by a major drug regulator or the WHO, have benefits that far surpass their risks.

In addition, while the mortality rate due to COVID-19 among children is low, the idea of vaccinating them banks on the fact that children can still host the virus and spread the disease to others.

That the same vaccine crises that Bhushan invokes were fuelled not by inadequacies in the vaccines themselves but by a lack of public trust is clear in this analysis published by The Wire Science.

“The COVID-recovered have much better natural immunity than the vaccine gives them. Vaccines may even compromise their acquired natural immunity,” Bhushan claimed in his tweet, with zero proof and against the prevailing wisdom.

As such, his claim that he isn’t an anti-vaxxer falls flat considering his rejection of vaccines is not founded on what we know but largely on the fact that there are vested interests in play.

He added that he hadn’t yet been vaccinated.

Following severe backlash against these three tweets on June 28, Bhushan responded that he believed that “it is irresponsible to promote universal vaccination of experimental and untested vaccines, especially to young and COVID-recovered.” However, he did not offer reasons as to why he believed the vaccines would have the adverse results he claimed they would.

The term “recovered”, with respect to COVID-19, has in itself a contested one, with connotations different from those people have been used to.

The Wire Science has reported loopholes in clinical trials and questionable practices relating to vaccines, but to call them “experimental and untested” grossly misrepresents what data is available about their effects on the body – with tests and follow-ups by epidemiologists, virologists and molecular biologists.

Bhushan’s diatribe also comes at a time when the Indian government has been keen to undo the damage wrought by its inability to secure vaccines for all Indians, and the rise of the delta and delta-plus variants of the novel coronavirus.