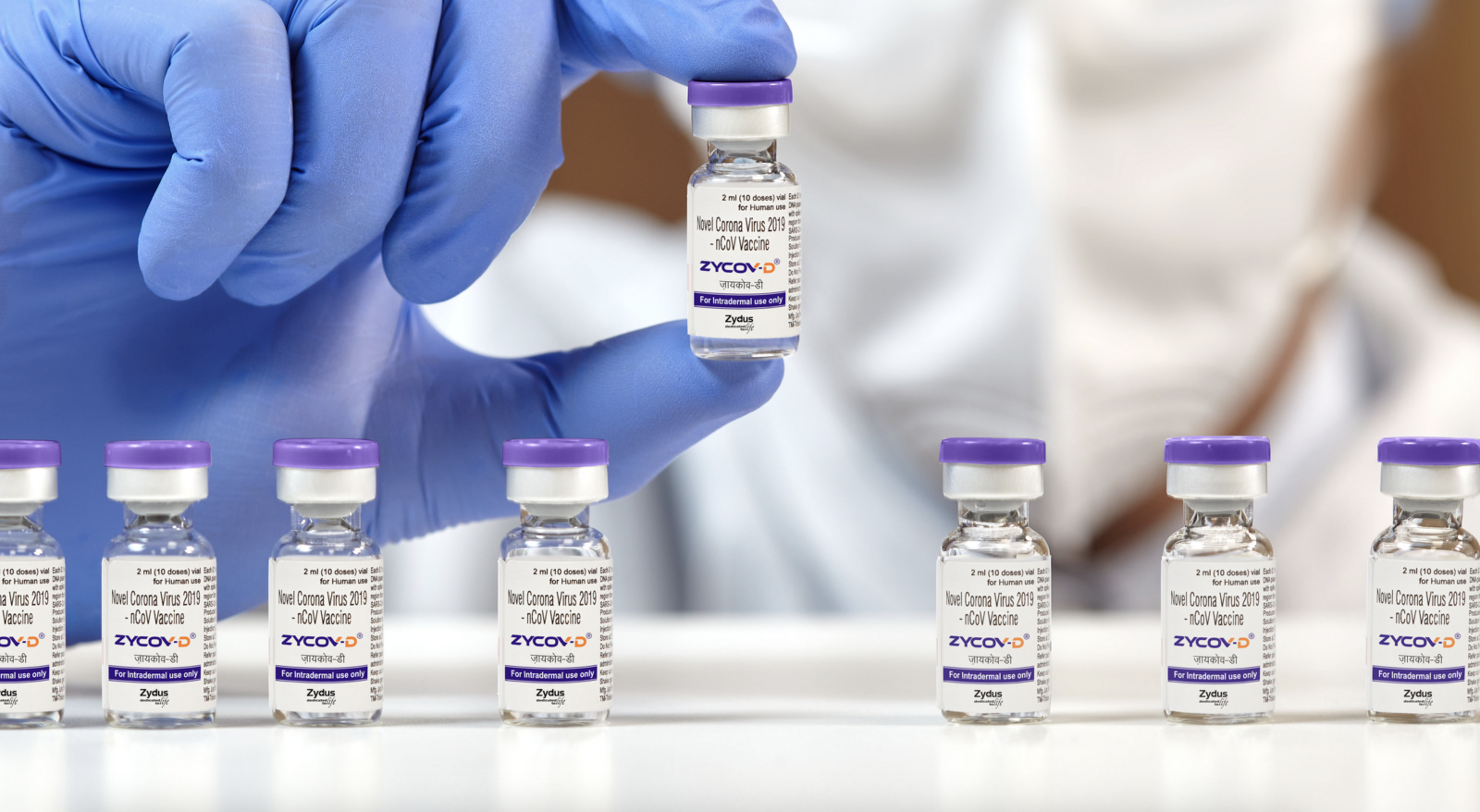 A lab worker holds up a vial of the ZyCoV-D COVID-19 vaccine. Photo: Zydus Cadila

On August 20, India’s Ministry of Science and Technology announced that a COVID-19 vaccine manufactured by Ahmedabad-based Zydus Cadila, called ZyCoV-D, had been granted ‘emergency use authorisation’ (EUA) for those aged 12 years or older.

Earlier, on July 1, the company had announced that it had applied to India’s regulator, the Drug Controller General of India (DCGI), for approval. Its press release said it had presented an interim analysis from its phase 3 clinical trial involving 28,000 participants. These results claimed an efficacy, including against the dominant delta variant, of 66.6% against symptomatic COVID-19. The analysis also claimed 100% efficacy both against moderate disease after three doses of the vaccine and against severe disease or death after two doses.

The full details of the analysis have not yet been made available for independent review, not even as a preprint paper that could lend itself to public review. However, if we take the 66% efficacy at face value, there are many features of ZyCov-D that are noteworthy.

ZyCov-D uses a novel vaccine delivery platform: it is a DNA plasmid vaccine. According to the WHO COVID-19 vaccine development tracker, 11 of 112 COVID-19 vaccine candidates currently undergoing clinical trials use the DNA platform. Of these 11, ZyCov-D is the only one so far to be studied in a phase 3 trial and the first to have received approval from its regulator. The DCGI’s EUA for ZyCoV-D is thus a breakthrough for India.

The DNA plasmid platform is an interesting idea that has been around for some time as a means of delivering genetically engineered DNA into the body to stimulate the manufacture of target proteins – against which the body then mounts an immune response. A plasmid is a “small circular piece of DNA that replicates independently from the host’s chromosomal DNA”. The trick lies in assembling the right building blocks of the DNA plasmid to instruct the body’s cells to manufacture the spike protein of SARS-CoV-2, the virus that causes COVID-19.

This feature of the DNA platform gives it a ‘plug and play adaptability’. As in the case of mRNA vaccines, should new variants of the virus arise a whichgainst the current crop of vaccines are not very good, all scientists will have to do is tweak the plasmid to make the spike protein of a new variant, and the corresponding vaccine will be ready.

One more feature of ZyCov-D is its mechanism of delivery: not through a hypodermic needle but through “a narrow stream of fluid to penetrate the skin, and deliver vaccine to the proper tissue depth”, according to this technology’s developer, a Colorado-based company named PharmaJet.

In its press release, Zydus Cadila acknowledged the support it received from the National Biopharma Mission. This is a mission of the Biotechnology Industry Research Assistance Council (BIRAC) under the auspices of the Department of Biotechnology. The mission has a $125 million loan (Rs 929.4 crore) from the World Bank. The National Institute of Virology, Pune, and its parent body, the Indian Council of Medical Research (ICMR) also collaborated on the project.

Zydus reported the results of a phase 2 study involving 1,000 participants through a press release, claiming adequate safety, tolerability and immunogenicity. The author couldn’t find a preprint or a published paper corresponding to this claim. The press release itself says that an independent data safety monitoring board reviewed the results and that the findings had been shared with the Central Drug Standards Control Organisation.

On the basis of the phase 2 trial results, the company planned and registered a large phase 3 trial with the Clinical Trials Registry of India (CTRI). The results from this trial have not been published in any form thus far; so our best source of information about the trial is the CTRI entry itself.

According to the registration, this was to be a randomised, placebo-controlled, multicentre double-blind study. The total number of participants to be recruited was 28,216, across 59 trial sites. The date of first recruitment was January 20, 2021.

About the primary endpoint, the CTRI entry says: “to demonstrate the efficacy of ZyCoV-D in the prevention of virologically confirmed symptomatic COVID-19 cases as compared to placebo.” This statement clearly misses the point of the requirement. It confuses the overarching objective with the trial’s clinical endpoints. It is the objective of any phase 3 COVID-19 vaccine trial to evaluate the vaccine’s efficacy vis-à-vis preventing COVID-19. The clinical endpoint, on the other hand, is the occurrence of a clinical event – usually confirmed disease of predefined severity or death.

For both kinds of endpoints, the observation period is day 84 to day 364. That is, the first dose will be on day 0, the third dose by day 56, and the observation period will begin a further four weeks later and last for the rest of the year from enrollment. Though it hasn’t been made explicit, this protocol suggests that the trial analysis will be per-protocol instead of being based on intention-to-treat.

The CTRI registration itself doesn’t say what the trial’s data analysis plan would be. It also doesn’t say how many participants will need to get COVID-19 before the clinicians can calculate the vaccine’s efficacy, and how many participants will have to get COVID-19 to permit the interim analyses. Such ‘milestones’ support event-driven analyses that help the clinicians ensure that when they’re calculating anything about the vaccine, they’re doing so with an adequate sample size. If they attempt to calculate the vaccine’s efficacy before a certain number of participants have got COVID-19, for example, they will be at risk of overestimating the efficacy.

Questions about the EUA

ZyCov-D is a potentially strong vaccine candidate that has been shown to be safe and immunogenic in animal and early-phase human trials. The planned phase 3 efficacy trial recruited 28,000 participants and should thus be able to yield reliable efficacy estimates. But starting with such a strong base and concluding with a complete lack of transparency is a matter of serious concern.

Its approval process is quite similar to the authorisation that the DGCI granted to Bharat Biotch’s Covaxin – two months before the company released the first interim analysis of data from its phase 3 trial. The decision was roundly criticised and contributed significantly to hesitancy.

Today, we have no numbers pertaining to the ZyCoV-D phase 3 trial other than the total number of participants and the stated efficacy against symptomatic COVID-19, of 66.6%. As with the CTRI registration, the Zydus Cadila July 1 press release doesn’t tell us how many people were in the treatment and control arms of the trial, how many people got COVID-19 in each arm nor even the confidence intervals of the 66.6% point-estimate of efficacy (as a result, we don’t know how precise this figure is).

A 66.6% efficacy means that the virus’s attack rate in the treatment (or vaccinated) group was a third of the virus’s attack rate in the control group. Assuming an equal number of participants in both arms – i.e. 14,000 each – we can say that for every one COVID-19 case in the treatment group, there were three in the control group.

Imagine two scenarios now, by way of example for the actual number of COVID-19 cases observed in the two arms; the author was able to calculate the estimated 95% confidence intervals for each scenario.

We see that the efficacy range varies drastically depending on the absolute number of COVID-19 cases. Note also that the range in Scenario B, of nearly 20 percentage points, is considered large, and ought to be narrower.

Another critical bit of information that’s missing is the duration over which the trials’ clinicians calculated the vaccine efficacy. Given that the trial’s first participant was recruited on January 20, 2021, and that interim analysis happened a little over five months later, on July 11, and assuming that recruitment continued for two months, the observation period of the earliest recruited patients would have begun only in late April. That is, the maximum duration any participant could have been followed up for is two months (May and June).

Of course, in May 2021, India experienced the worst of its second COVID-19 outbreak, and the number of new infections crossed the four-lakh mark. So it is possible that a sufficient number of the trial’s participants got COVID-19 to allow the clinicians to perform their calculations. However, we shouldn’t have to be at the mercy of such conjectures to be able to trust something we’re going to insert in our bodies.

Also read: As the Delta Variant Family Grows, the Ancestor Continues To Dominate

Finally, the July 1 press release states that of the 28,000 participants recruited, a thousand were aged 12-18 years, and that in this group the vaccine was “safe and well-tolerated”. It fails to divulge, again, the number of COVID-19 cases in this sub-group. And considering how small this sub-group is relative to the overall cohort, it’s quite concerning that the DCGI saw fit to grant ZyCoV-D an EUA for people aged 12 years and above.

In sum, ZyCov-D may well be a remarkable innovation story for Indian science – but remarkability does not mean it can remain immune to demands of transparency and approval after due process, with publicly available data. In fact, once again, we are on the cusp of a success story being turned into a blemish on the face of Indian science.