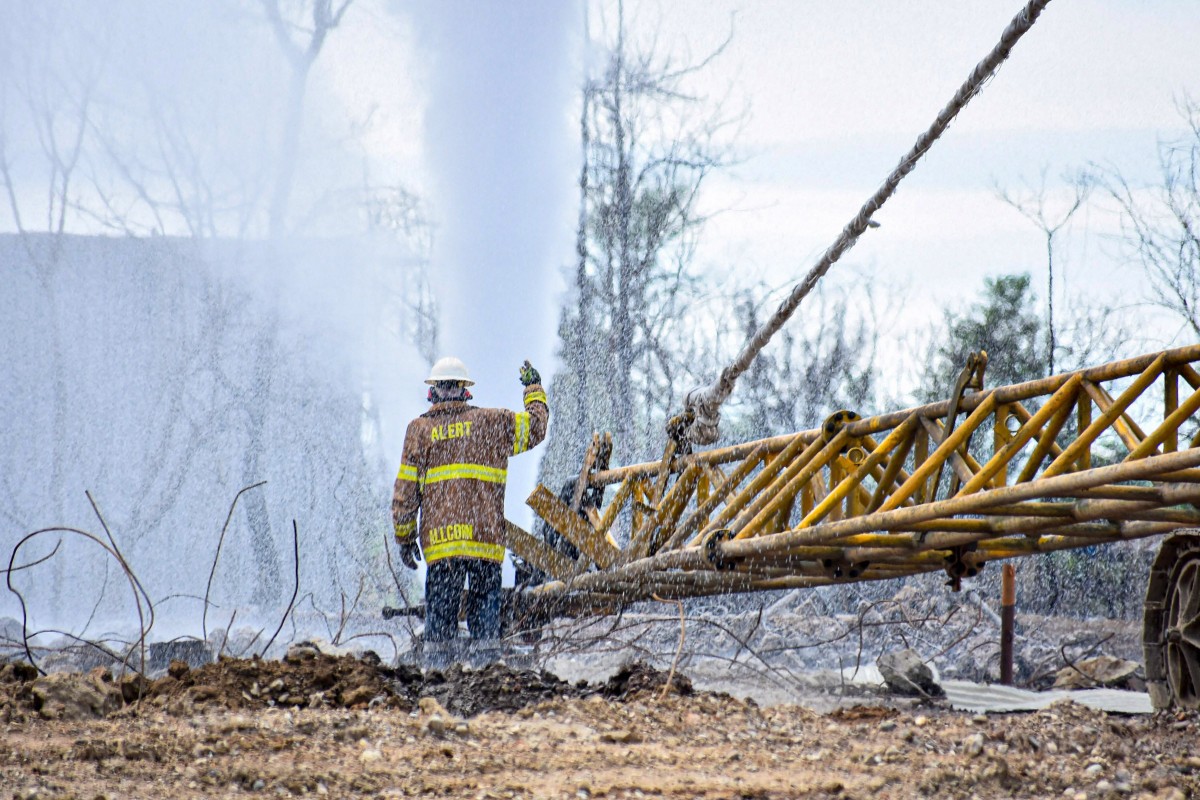 India: Why Was Daytime Ozone Pollution Higher During the Lockdowns?

Water being sprayed at the Baghjan oil well site after three foreign experts were injured in an explosion, in Tinsukhia district, July 22, 2020. Photo: PTI.

Guwahati: Energy giant Oil India Limited’s brush with ill fate once again continued on Wednesday when three foreign experts, who were called in last month by OIL to douse the fire at Baghjan gas well-5, met with ‘superficial’ burn injuries while attempting to remove the spool during the ongoing blowout control operations.

Local media channels in their day-long reporting said there had been a ‘blast’ at the site which resulted in the accident causing burn injuries to the Singapore-based firm experts. OIL has dubbed the incident as ‘minor’.

Wednesday’s incident was preceded by an episode where a crew member of a documentary filmmaking team from Discovery Communications India – which was invited by OIL to make a documentary on the blowout incident resulting in a deadly towering inferno at well No. 5 on June 9 – tested positive for COVID-19 a few days ago.

A little while after mid-day on Wednesday, three foreign experts – Anthony Steven Reynolds, Doug Dallas and Craig Neil Duncan – from the Singapore-based firm M/s Alert, suffered minor injuries when they were trying to remove a spool from the well head. According to local news channels, one of the foreign experts suffered facial injuries.

In a written statement, OIL said, “The three experts were provided with medical attention immediately at the well site and later on they were taken to the burn unit section at Astha Hospital in Dibrugarh district. They were released after dressing of their injuries. It is expected that operations will resume at Baghjan tomorrow.”

In a series of tweets, OIL stated, “While removing the spool during blowout control operations at Baghjan well no.5, three experts from M/s Alert sustained minor injuries. Treatment was provided immediately to the injured experts.”

Another tweet stated, “The three experts were provided immediate medical attention by a doctor at well site and later they were taken to burn unit section of Astha Nursing Home at Dibrugarh. They have been released after dressing of d burn injuries. It is expected that operations will resume at Baghjan tomorrow.”

OIL has refuted claims that there was a blast at the site on Wednesday. While speaking to the media, OIL spokesperson Tridiv Hazarika said, “It was not a blast, but a work-related accident. A lateral fire took place.”

OIL has been facing one controversy after another. On July 19, local daily The Sentinel reported:

“A second team of Discovery Communications arrived on July 13, keeping Tinsukia district administration in the dark. After a crew member tested positive fear gripped people of Baghjan, especially the several hundred camp inmates with whom the team had interacted. According to camp inmates, there were more than five members who were filming together.

Though a source in OIL contended that five members from the first team were at the blast site while the second team was isolated at Duliajan, the question arises as to why the OIL sought exemption from general quarantine and how the Dibrugarh Deputy Commissioner justified ‘film documentation’ an emergency event that qualifies exemption under COVID-19 protocol?”

“Claiming to be an ’emergency’ situation, OIL CGM (Administration) HC Borah had sought exemption from general quarantine norms in letters addressed to the Deputy Commissioner, Dibrugarh (vide CGM(A) Baghjan/668 of 3.7.2020 & 709 of 13.7.2020) in respect of two teams that arrived Dibrugarh en route to Duliajan on different dates,” the daily reported.