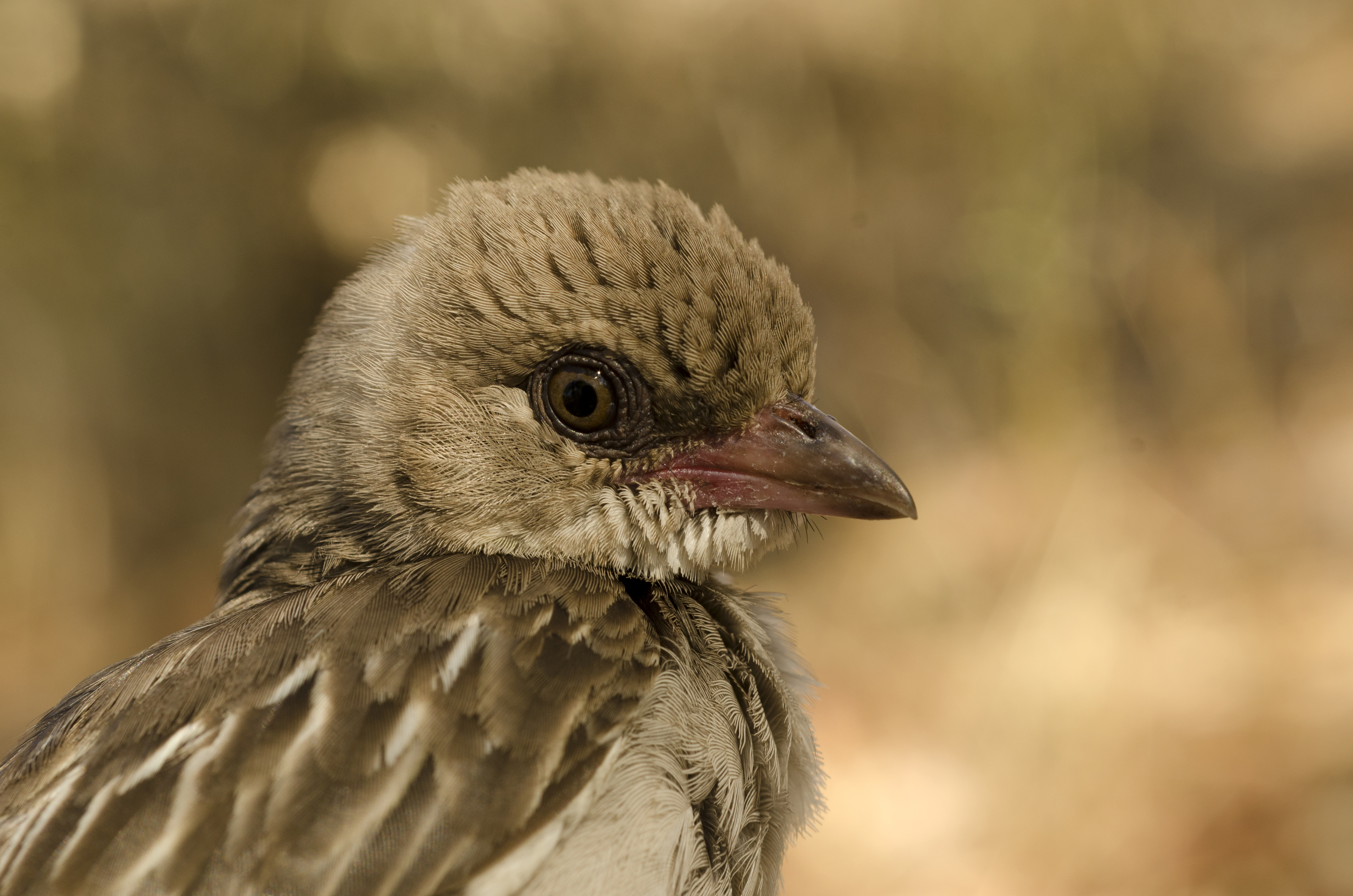 Indigenous people in Africa communicate with a species of bird called the great honeyguide by making specific calls in their quest for beehives. This is a rare instance of a wild creature cooperating with humans to harvest a wild resource with no prior training.

A small brown bird lands on a low branch, uttering a loud two-note trilling call insistently while flashing prominent white spots on its tail and ruffling its wings. This performance attracts the attention of Yao hunter-gatherers in Mozambique to follow the bird. As its name suggests, the myna-sized greater honeyguide leads people to beehives.

Honey can make up to 10% of indigenous people’s diets. Finding beehives in the deciduous forests and savannahs of Africa is time-consuming. The insects typically hide their nests high up inside hollows of large trees like baobabs and in sheltered rock crevices. The honeyguide lives largely on the brood of honeybees, and surprisingly, beeswax. Although  it appears to have some defence against bee stings such as unusually thick skin and upraised nostrils, it cannot tackle enraged bees by itself. It depends on people to scare the insects away with smoke and open up the nest with axes. Until humans harvest the hive and leave, a process that may take as long as 90 minutes, it waits patiently before feeding on the fat-rich wax combs left behind.

This unique collaboration between a free-living creature and local people was known for centuries. In 1609, João dos Santos, a Portuguese missionary, published an account of his travels through south-east Africa in Ethiopia Oriental. He wrote that a small bird that entered his mission church to nibble on candlesticks also led people to beehives.

Similar honeyguide-people relationships have been reported from Kenya and Mozambique too. Evolutionary biologist Claire Spottiswoode of the University of Cambridge, U.K., and her colleagues worked with the indigenous Yao men to study the collaborations.

The study site was a vast deciduous woodland the size of Denmark called Niassa National Reserve, Mozambique. The indigenous Yao depend on wild beehives for honey that they harvest by traditional means.

The researchers investigated whether honeyguides were reliable guides. Do they infallibly lead people to hives?

Once it has the men’s attention, the honeyguide flits from tree to tree in the direction of a beehive. Not all that different from a pet dog that leads you to the cupboard with its favourite chewies. When the men follow, it leads the way, flying sorties to the nest and back. Once the party nears the destination, the bird perches close by and makes another call as if to say, ‘We’ve arrived.’ Sometimes, it circles the hive to show it’s location.

The birds’ calls and displays urging hunters to follow them appear to be similar across their range. “I myself have been guided by honeyguides in Ethiopia, South Africa and Zambia as well as Mozambique and it all seems similar to my eye/ear,” Claire Spottiswoode told The Wire.

As honeyguides led the men, the researchers trailed along, marking their progress with a GPS logger. Since they covered a large area and individual birds had home ranges not exceeding 1 square kilometre, the authors suggest a different bird guided them every time.

The birds led them to at least one beehive in 75% of 97 guiding events. Most hives belonged to the common honeybee and the rest to stingless bees.

Much of this was already known. Not only do Spottiswoode and her colleagues put numbers to this behaviour, but they uncovered another astonishing  layer to this mutually beneficial relationship.

Throughout the walk to the hive, the men ‘chat’ with the honeyguide by making a loud trill and grunt, ‘brrrr-hm.’ Since it’s not a call they use on any other occasion, the birds appear to know this sound well. If no honeyguide is visible, Yao men summon the birds by calling ‘brrrr-hm’ loudly much as we would whistle for our pet dogs.

The researchers wondered if the birds understand these humans calls as an invitation to find beehives. Spottiswoode conducted 72 trials with three different audio recordings: song of the ring-necked dove, Yao words and the ‘brrrr-hm’ call. The probability of finding a beehive more than tripled for the ‘brrrr-hm’ calls. When she played other sounds, the birds lost interest, confirming that they recognise the call to hunt.

“What our research has done is to complement earlier findings by showing that humans communicate back to honeyguides, too. Honey-hunters use special calls to signal to honeyguides that they’re eager to follow, and honeyguides use this information to choose partners who are likely to be good collaborators. So not a one-way of information, but rather a two-way conversation between our own species and a wild animal, from which both partners benefit.”

This is a rare instance of a wild creature cooperating with humans to harvest a wild resource with no prior training.

Wild common bottlenose dolphins in Mauritania and Brazil and Irrawaddy dolphins in Myanmar drive fish towards fishing nets. In the melee, dolphins nab a few disoriented fish, while fishermen rake in the catch. This is perhaps the only similar relationship between humans and wild creatures.

While these instances illustrate the collaboration between man, a terrestrial mammal, and aquatic mammals, the greater honeyguide’s relationship with humans is described as ‘possibly the most advanced bird-mammal relationship in the world.’ By using their distinct calls, birds and men communicate their intent to each other. Honeyguides don’t have the option of learning from their parents like the honey hunters do. The birds lay their eggs in the nests of other species like cuckoos. Their foster parents raise them on a diet of insects. So the opportunity to learn from their biological parents doesn’t arise.

Besides, people of different regions summon the birds with different calls. A honeyguide from Mozambique will be unable to recognise the melodious calls of the Hadza in Tanzania. The Boran pastoralists of northern Kenya call the birds by whistling through closed fists, snail shells, and hollow palm nuts. To adapt to the varying human calls, the birds can’t rely on an innate knowledge of a specific man-made sound.

How do the birds learn the special calls of honey hunters of their own area? The authors suggest the birds may learn by watching other honeyguides near beehives.

“We don’t know whether this behavioural specialisation reflects a honeyguide ‘culture’,” adds Spottiswoode. “This is just a hypothesis. In fact culture has a very precise biological definition that would take careful experimental work to test in honeyguides.”

American and British researchers speculate the collaboration may have arisen in the Pliocene, about 3 million years ago, between honeyguides and one of our earliest ancestors, Ardipithecus or an Australopithicine.

The birds developed this specific repertoire of displays and calls after identifying humans as their best partners in this endeavour. Although they are said to lead nocturnal ratels to beehives, biologists have found no evidence.

This millennia-old tradition may be petering out as people switch to store-bought sugar and honey. When no one shows interest in their calls, honeyguides stop soliciting people to go honey hunting. The birds had already given up guiding in some parts of Kenya in 1989. Spottiswoode says the tradition is on the decline in Zambia as well. As people are excluded from using national parks, these relationships may cease altogether. With these disappearing relationships, the opportunities to understand them are also disappearing, bemoans Spottiswoode. “It mostly persists and thrives in wildernesses like Mozambique’s amazing Niassa National Reserve where people and wildlife still coexist.”

Without human partners, honeyguides may not have access to beehives. How do they survive?

“We don’t have data on this,” replies Spottiswoode, “but honeyguides certainly do eat insects too. Additionally, African bees quite commonly ‘abscond,’ move nests to a new site, sometimes seasonally. If they abandon a nest in a location that honeyguides might have access, e.g. a tree hole with a big entrance then they might be able to reach wax combs that are not defended by bees.”

The study was published in the journal Science on July 22, 2016.

More Fun Than Fun: David Wake, Salamanders and the Origin and Loss of Species

Mutations: Does SARS-CoV-2 Have a Fixed Number of Moves in Its Arsenal?