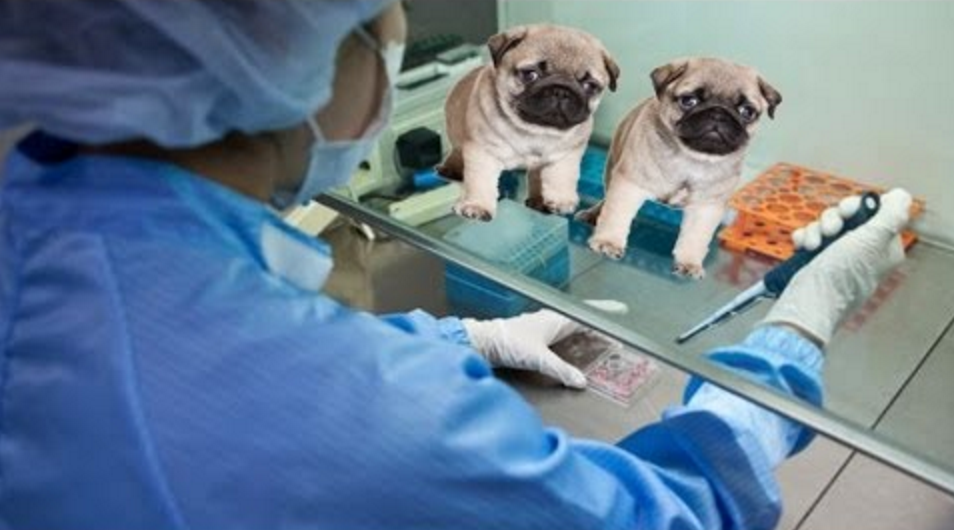 Last week’s announcement that the world’s biggest cloning factory would soon open in China wrinkled many an eyebrow – but it’s not the technology as much as the people and the places involved that’s causing the panic.

Losing a pet can be devastating for the owner, but let nobody tell you that science doesn’t have the answer. For just US$100,000, Sooam Biotech Research Foundation in South Korea will produce for you a dog who is 100% genetically similar to yours or, to put it scientifically, a clone.

The ‘Dog Cloning’ section in the non-profit research company’s website gives you fairly straightforward instructions on how to act once your dog dies (wrap the cadaver in a wet towel, place it in the refrigerator) and a set of instructions for the vet on how to get a good tissue sample. Once the cryopreserved tissue sample reaches Sooam and deemed viable by the researchers, it takes just over two months for the puppy to be born. This puppy will have identical DNA as the donor’s tissue sample, though it will have been born through a surrogate dog chosen at Sooam’s facilities.

Sooam has been doing this for years. Ever since the world’s first cloned dog, Snuppy, was born in 2005, they have cloned hundreds more. While many are pet dogs, several are sniffer and rescue dogs. Last year, the group cloned the endangered Tibetan Mastiff breed. Sooam boss Hwang Woo-suk dreams of cloning giant pandas and even the extinct woolly mammoth.

In an attempt to popularise their service Sooam also organised a YouTube-driven contest in 2013, offering dog owners in the UK a chance to have their pet cloned for free. The winner got her cloned pup last year and according to a news story, both the twelve-year-old (genetic) mother and pup are doing well.

It may be a cause of some wonder that a research organisation is so dedicated to something as frivolous as cloning pet dogs for rich devoted owners. Indeed, dogs have always been merely an entry point for Sooam, as was confirmed with last week’s announcement that they would be collaborating with Chinese biotech company BoyaLife to open the world’s largest cloning factory next year in Tianjin, China.

According to their statement, their aim is to “edge the controversial science closer to mainstream acceptance”. Their strategy to achieve this seems to be to keep it utilitarian. They will primarily be cloning cattle to meet China’s beef demands, which according to a PriceWaterCooper report from October has quadrupled since 1971, in addition to valuable racehorses and endangered rescue dogs.

As a technology, cloning today is hardly worth the brouhaha. Defined as any process that is used to produce genetically identical copies of a living organism, cloning occurs naturally in organisms like bacteria and some plants which reproduce asexually. We now know how to create artificial clones in other organisms but the practice continues to be ethically questionable. Clones are frequently born with serious ailments and shorter lifespans. Their birth sizes are usually higher than normal, resulting in painful birthing processes for the mothers. And questions like their freedoms and identity are heavily loaded when talking about human clones. Clones are individuals too after all.

Nevertheless, cloning has a history spanning almost 100 years and, since Dolly the sheep became the first mammal to be successfully cloned from an adult cell, we’ve cloned cows, goats, cats, dogs and even made some progress with primates. India has cloned several buffaloes as well as the world’s first pashmina goat to date.

As much of an everyday affair animal cloning has become for the scientific community,  it’s not as if all its members is excited by this Chinese venture, in fact many are downright skeptical.

A large reason for the anxiety is the involvement of Hwang Woo-suk, the founder of Sooam. Eight years ago, Hwang was involved in one of the biggest disgraces in his field after he was accused of fraud in his research, including his groundbreaking study that described the creation of the world’s first stem cell line derived from human embryos. Investigations made it clear that Hwang had indeed indulged in grossly unethical behaviour. He used illegal and unethical methods to collect human eggs for the experiment (his own graduate students donated theirs). Sealing his fate was the revelation that his team, with his knowledge and maybe even guidance, had fabricated important data in the human cloning papers. He resigned from most of his posts and was reportedly left penniless and sick after this episode.

Nevertheless, the ambitious former veterinarian had enough supporters to help him rise back up. Even though the journal Science retracted Hwang’s papers, he has managed to convince some official bodies that the stem cell line is authentic. So far Canada has granted him a patent.

Though today he keeps a much lower profile, Hwang seems to have staged a noticeable comeback in the comparatively uncontroversial field of animal cloning with Sooam. It’s an open secret that his ultimate intention is to return to human therapeutic cloning, and this is making many nervous. His peers around the world, whose reputations were all affected by his misdemeanours, will remain wary of this. Human genetic engineering was a controversial enough without such lapses from the side of scientists.

Close on the heels of Hwang’s miserable track record is that of China’s. Memories of April, when a team of Chinese researchers announced that they had attempted to edit the DNA of human embryos to correct a defect causing β-thalassaemia, are still fresh. Their trials had met with very limited success — only a small fraction of the embryos successfully incorporated the intended edit — but a lot of panic due to the involvement of live human embryos. Even though the scientists stressed that the live embryos they used were unviable ones that had been discarded from fertility clinics and would never have resulted in a live birth, what’s to make sure that other reckless and less scrupulous labs around the world don’t take this precaution?

While there is at least active debate about gene editing in China (the Chinese Academy of Sciences co-organised the ongoing International Summit on Human Gene Editing that will conclude on Thursday), there does not seem to be much of scrutiny when it comes to cloning, which is considered safer because no changes are introduced in the DNA. As a result, regulations regarding cloning and consumption of food products from cloned animals remain relatively loose, unlike in the US or in Europe.

This has allowed companies like BGI, functioning out of a former shoe factory, to churn out 500 cloned pigs every year. The new factory at Tianjin will produce 100,000 “top quality” cow embryos a year. A researcher from China’s Peking University told Financial Times last week that China’s “unclear and incomplete” regulations do not reflect a different ethical system, but merely the fact that their progress in gene technology is difficult for policies to keep up with.

It doesn’t help their credibility that the site for the factory, Tianjin, is where a horrible industrial accident leaked dangerous chemicals and killed more than a hundred people earlier this year.

Scientists from BoyaLife know that their cloned beef may not be an easy sell. For it to be accepted, they are going to have to win back the trust of the Chinese public who have been scarred by grave food safety scandals, including one that killed six infants and made thousands more very sick, in the recent past. According to a Pew Research Centre poll from September, concerns about food safety in the country have nearly tripled since 2008.

But China is learning from its mistakes. An extensive food safety law, the strictest to date, was implemented in October. Enforcement issues owing to the size of the country and the number of farmers indicate that this will be no quick fix but the law is expected to improve supervision in key areas such as infant formula, health food and online shopping of food. It also states that genetically modified (GM) food should be labelled according to provisions. However, it doesn’t explicitly address food from cloned sources.

No need to stick your tongue out

In the rest of the world, the idea cloned livestock is not as controversial as genetically modified (GM) food. India’s National Dairy Institute recently hinted that it may be looking at cloning buffaloes (something it has accomplished before) to meet the country’s milk demand. The US Food and Drug Administration allows it, as does the UK’s Food Standards Agency under some conditions. In a 2008 report, the FDA concluded that  “meat and milk from cow, pig, and goat clones and the offspring of any animal clones are as safe as food we eat every day.” Still, in both these countries, the cloned animals are so far mostly used for breeding, to increase the quality of the offspring, rather than to consume directly.

Public concerns of food safety is mainly chalked down to lack of outreach and a misguided “yuck factor”. Concerns about animal welfare however are yet to be quelled.

As for India’s stance on cloned beef, it is unlikely to be any less stringent than its stance on beef itself.

The onus is on the Chinese government to get its act together and impose a sensibly stringent regulation system for animal cloning. Meanwhile, the folk at the new cloning factory have their work cut out for them. Not only do they need to educate and get the consent of a skeptical public, Hwang Woo-suk needs to do some major image rebuilding to be taken seriously, all whilst dealing with animal cruelty accusations that will be continue to be thrown at them.