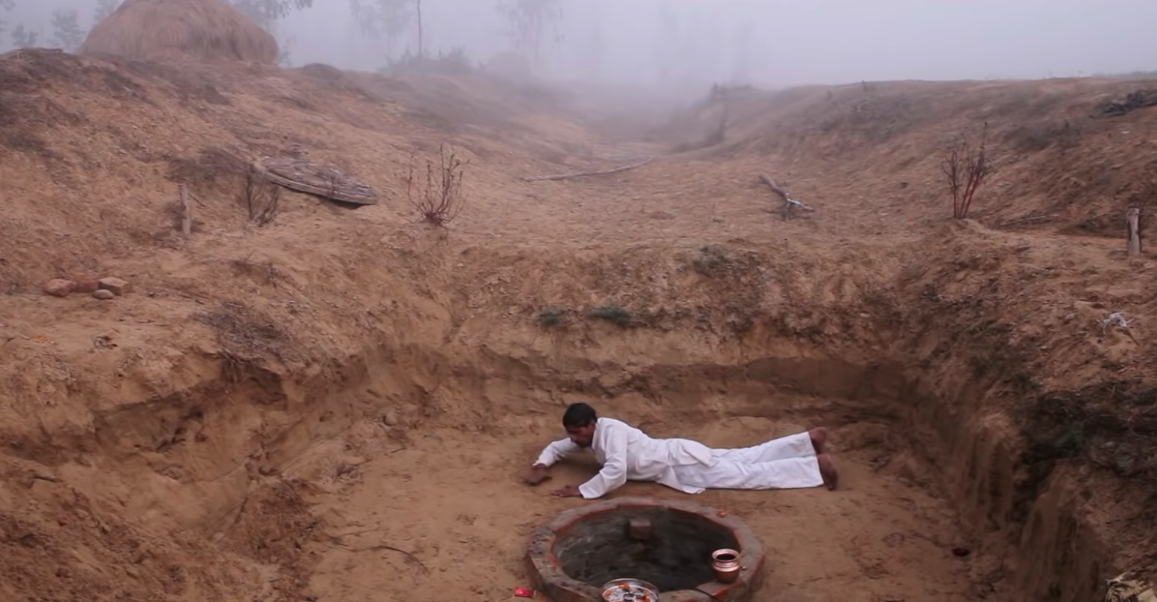 The Saraswati River mentioned in superlative terms in the ancient Indian scriptures like the Rg Veda has been a subject of scientific curiosity for over a century.

Considered sacred by devout Hindus, it is described as “surpassing in majesty and might of all other rivers, pure in her course from the mountains to the ocean”. No other river is glorified thus in the Rg Veda (RV).

Book 6 of the RV includes a hymn called the ‘Nadistuti Sukta’, which sings praises of the Saraswati as being “perfect mother, unsurpassed river, supreme goddess”.

It is obvious that the author(s) of Book 6 considered the Saraswati a significant river.

Interestingly, by Book 10, the last part of the RV, the prominence had shifted to the Indus river, known to our ancestors as the Sindhu. In fact, the Saraswati had become a lesser river by the time the Panchvimsha Brahmana in the Sama Veda was written c. 800 BC; it was described as an entity “no longer able to hold up the heavens and consequently has gone underground”. Thus, what was earlier called ‘Nadimata Saraswati’ is now called ‘Vinasana Saraswati’.

How did such a mighty river disappear without leaving any topographical signatures? Can a river of such proportions dry up so fast and disappear underground? Could this even make geological sense?

Resolving the Saraswati’s mystery is key to understanding the Harappan and Vedic geographies. According to mainstream theory, they spread over part of eastern Afghanistan and the region between the Indus and the Yamuna-Ganges.

Surgeons of the Bengal Medical Service took the first steps to locate the river, although some cues had already been provided by Indologists like Max Müller.

Horace Wilson, a surgeon by profession, speaks of the holy land of Manu that lies between the Drishawati and Saraswati in the introduction to his translation of the ‘Vishnu Purana’. The Drishawati is now a minor stream known as the Ghaggar-Hakra. Similarly, C.F. Oldham, the surgeon-major of the Bengal Medical Service, speculated in an article in 1847 that the dry bed of the Ghaggar and the disjointed topographical crenulations downstream along the northern and western fringes of the Thar desert were remnants of the Vedic Saraswati.

Oldham also traced the course of this river in abandoned channels in Haryana, the Punjab and adjoining parts of Pakistan. He ended up ultimately in the Rann of Kutch in Gujarat.

This proposition has been critiqued by scholars like Romila Thapar, Irfan Habib and Rajesh Kochar: the RV’s description of the river does not match with the Ghaggar, which is seasonally active. Instead, they suggested that the name ‘Saraswati’ could have been derived from ‘Haraxvati’, a major river located in eastern Afghanistan. The early generation of RV authors may have lived on its banks before migrating to the Indus delta.

In his book Early Indians (2018), Tony Joseph calls India a migrant nation built over time, and that the RV people belong to the third wave of migrants, who came after Harappans. The representative geographic entity at that time was shaped by various migrants with different cultural practices.

Also read: Located Between Fact and Fiction, ‘Searching for Saraswati’ Is a Warning for the Future

This is challenged by a counter-narrative centred on the India-centric theory of Vedic Aryans and their outward migration. An Indus-like river Saraswati plays a big role in this counter-narrative, and is said to be located within the modern boundaries of India. Its banks are believed to have been a haven for early Vedic Aryans. This alternate view also equates the Vedic people with the Harappans.

However, population genetics studies have disfavoured the latter hypothesis and have supported the former.

So when some influential Indian geologists supported the idea that the Saraswati could have been a major all-season river in the Indus-Yamuna interfluve, it was a shot in the arm for those who believed the India-centric theory of Aryans.

Some geologists also said that landform changes triggered by tectonic activities around 2000-3000 BC along the frontal Himalaya could have severed the river from its Himalayan source. They also argued that the land-level changes cause the river’s course to shift eastward as the Yamuna and westward as the Sutlej, leaving the Saraswati to dry up.

Originating in the high Himalaya, the Saraswati is believed to have descended to the plains from Adi Badri, situated in the Shivalik foothills, joining the Arabian Sea at the Rann of Kutch.

But these longstanding geological views have been challenged by a spate of research papers published in the last few years, backed up by refined satellite imagery, topographic analysis and more precise dating techniques.

Analytical techniques in particular helped trace the source and provenance of sand grains collected from defunct river channels. (Sediments from the high Himalaya carry certain isotopic signatures that sets them apart from sand from the lower hills.)

The change in perspective began with a 2012 paper by Liviu Giosan and others. They suggested that the Ghaggar-Hakra fluvial network was not the product of a large glacier-fed Himalayan river but of a rain-fed stream originating from the lower hills.

At first a ‘perennial’ civilisation because of the steady monsoons, the Harappans later thrived by engaging in flood inundation harvests (4,500 to 3,900 years ago). A worsening drought peaked about 3,900 years ago, likely forcing the Harappans to downsize their settlement and migrate east or even north, towards the wetter parts of upper Punjab, Haryana and Uttar Pradesh.

However, it is safe to say that sometime in the past – much before human settlements – some channels of the Yamuna or the Sutlej had flowed through the Indus-Yamuna interfluve region. Glacial melting after the ice age (from 11,700 to 258,000 years ago) may have generated additional, short-lived channels that flowed to the interfluve region due to greater discharge from Himalayan rivers.

In another 2012 paper, Peter Clift and his peers posited that subsurface river channels near sites in Cholistan near the northern part of the Ghaggar-Hakra floodplain contain sediments affiliated with the Beas river in the western sites and the Sutlej and the Yamuna in the eastern ones.

This implies that the Yamuna itself, or one of its channels, along with an offshoot of the Sutlej may have occupied the Ghaggar-Hakra course sometime between 47,000 and 10,000 years ago.

In 2016, Ajit Singh et al agreed that the Ghaggar-Hakra palaeochannel was a former course of the Sutlej, which diverted to its present course 17,000 years ago, much before the Harappan civilisation. They also studied sites near the Kalibangan in Rajasthan to conclude that the urban populations had settled along a monsoon-fed seasonal river, not along a perennial river.

Then, in 2018, Aditi Krishna Dave and others suggested that glacially driven rivers stopped flowing in that part of the interfluve region sometime between 24,000 and 45,000 years ago – again, much before the Harappans settled in that area.

So it seems the Harappans were not enamoured by a mighty Himalayan river as much as the Vedic Aryans might have been. The latter’s culture was rooted in nature worship. When some of them reached a much drier Indus interfluve region around 1800 BC, they must have been disappointed by the landscape and eager to push eastward to the water-rich Gangetic plains. The mature phase Harappan settlers, who were adept at managing water, must have also withered by then.

Like many cultural memes, the legend of Saraswati is part of Hindu religious identity and is alive in the minds of thousands of believers. But like all memes, these ideas are built up over several generations, incrementally embellished with time.

The human mind is a machine that constantly builds stories about itself that eventually merge with one’s identity. These stories invariably carry a stamp of perfection. The migrants move to new host societies, they bear a material burden as well as the burden of their heritage and histories. And a migrant’s is reconfigured once she negotiates with the conditions of emigration and her transcultural contacts.

Thus, the diaspora – the Vedic Aryans, often of tenuous status within their host majority culture – the Harappans – could have created mythic memories of their homeland as a way to assert their exclusivity and otherness. So it is also likely that the Saraswati was a mental construct of the Vedic Aryans, which metaphorically overflowed as they encountered the bleak, water-poor landscape of the Indus-Yamuna interfluve.

The new findings don’t believe there existed a perennial river in Harappan times in the Indus-Yamuna interfluve region of northwest India.

Which then begs the question: What is the need to dredge for a nonexistent river in desert sands for Rs 50 crore?

As Krzysztof Iwanek, a South Asia expert, wrote, devout Hindus have been taking their holy dips at the confluence in Prayag for ages without ever feeling the need to locate the Saraswati – a river that actually runs through their hearts.

If the Centre wants to strengthen the people’s faith, then a physical search for the Saraswati’s course – or an attempt to ‘revive’ it by dredging – makes no sense. In fact, it could be counterproductive. And if the intention is to address the region’s water scarcity by recreating a river, the project is still scientifically suspect.

Climate Change: The New Normal Is Not Yet Here

What Does the IPCC’s Landmark Climate Report Say About India?