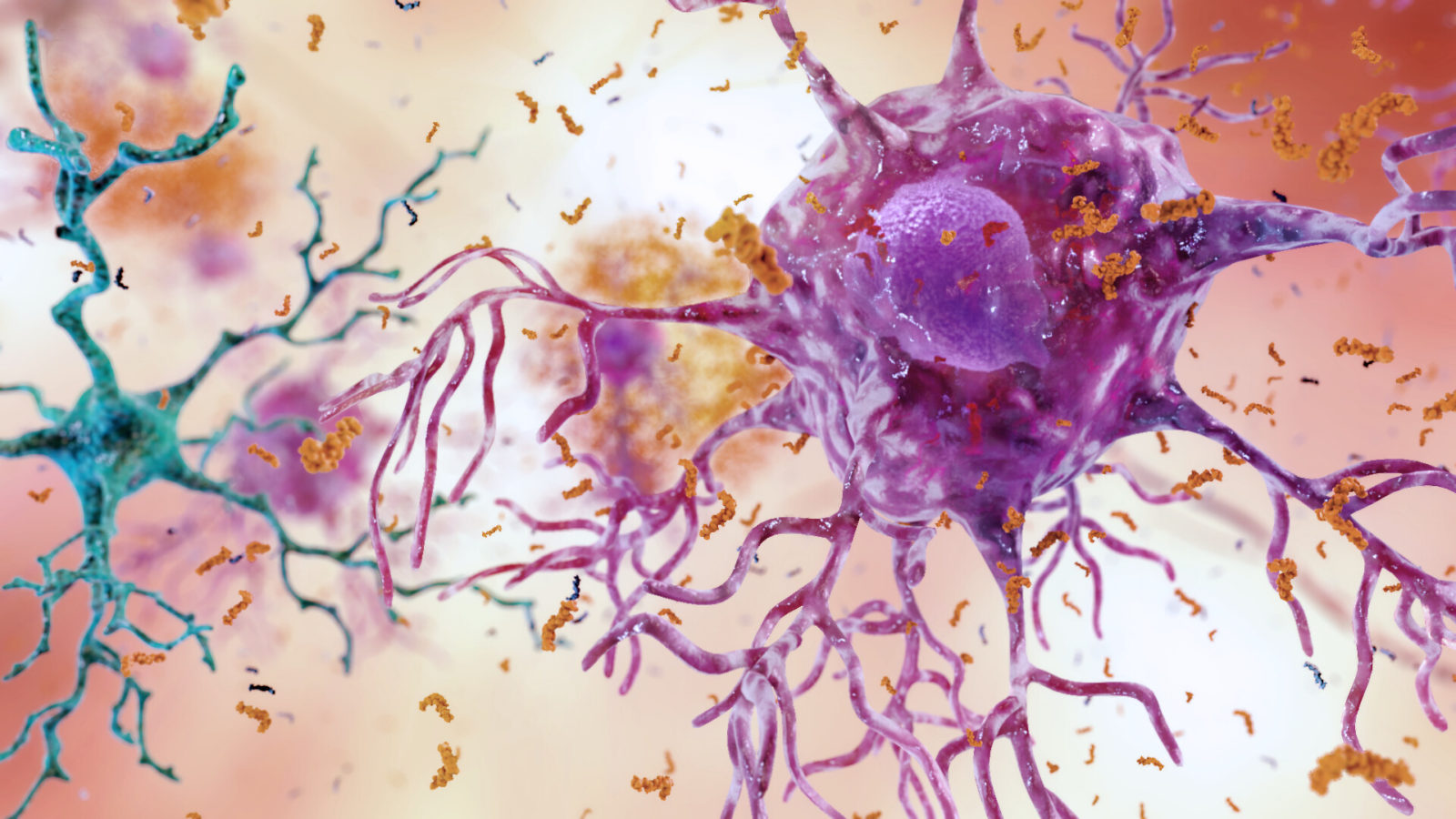 How Well Do You Know Your Heatwave? A Study of India Data

An artist’s impression of what brain inflammation due to Alzheimer’s disease might look like. Illustration: NIH Image Gallery/Flickr, CC BY-NC 2.0

New Delhi: The dominant theory about what causes Alzheimer’s disease may have been driven by data derived from falsified results and “shockingly blatant” image tampering, an in-depth investigation by Science has found.

For nearly 16 years, clinical trials on how to cure Alzheimer’s – a neurodegenerative disease that can cause memory loss, dementia and behavioural issues – have been influenced by a study published in 2006 in the journal Nature. It said that deposits of a species of amyloid beta (Aβ) – a protein – in brain tissues were the primary cause of cognitive decline, a hallmark of Alzheimer’s disease.

Alois Alzheimer, who first detected the disease in 1906, found plaques and other protein deposits in the brain of a deceased dementia patient. Several decades later, in 1984, researchers identified Aβ to be the main component of the plaques.

But the Nature paper was significant because one researcher from the group that conducted the study claimed that Aβ*56 – a previously unknown type of compounds called oligomers – was “the first substance ever identified in brain tissue in Alzheimer’s research that has been shown to cause memory impairment.”

The researchers claimed to have isolated Aβ*56 and injected it into young rats. They wrote that subsequently, the rats’ capacity to “recall simple, previously learned information – such as the location of a hidden platform in a maze – plummeted”.

The findings were described as a “smoking gun” for the amyloid theory and received widespread acclaim.

Since publication, the Nature paper has been cited in about 2,300 scholarly articles – putting it in the top five Alzheimer’s-related reports published since 2006, according to Science.

“Since then, annual [government] support for studies labelled ‘amyloid, oligomer, and Alzheimer’s’ has risen from near zero to $287 million in 2021,” the magazine said.

As the theory became more dominant and received billions of dollars in funding from the US National Institutes of Health (NIH), proponents of other potential causes of Alzheimer’s – such as immune dysfunction and inflammation – were “sidelined”.

John Forsayeth of the University of California, an expert on Alzheimer’s, told Science that the amyloid hypothesis became “the scientific equivalent of the Ptolemaic model of the Solar System”, with Earth at the centre of the universe.

Now, Science‘s investigation has found evidence suggesting that at least 70 images published by the first author of that influential 2006 paper, Sylvain Lesné, a neuroscientist at the University of Minnesota, may have been manipulated. More than 100 images related to the amyloid theory in all have been cast in doubt, the magazine reported.

These manipulations were allegedly made to show that Aβ*56 played a role in causing Alzheimer’s, the evidence suggests – whereas it may not have.

Science wrote that an independent image analyst and several top Alzheimer’s researchers reviewed the findings and concurred that the images had been tampered with.

“Some look like shockingly blatant examples of image tampering,” Science quoted Donna Wilcock, an Alzheimer’s expert at the University of Kentucky, as saying.

How was manipulation identified?

In July 2021, neurologist Matthew Schrag was a high-profile opponent of the US Food and Drug Administration (FDA)’s decision to approve a drug to treat Alzheimer’s. The drug was based on the amyloid hypothesis and Schrag felt there was “scant evidence the treatment worked”, according to a Washington Post report.

He told the newspaper then that “years of testing drugs that target amyloid had yielded a string of failures”.

“We had been hoping for a recalibration of the field,” Schrag, currently a researcher at the Vanderbilt University Medical Centre, Tennessee, said.

Soon after, Schrag was hired by an attorney who was investigating another experimental drug for Alzheimer’s, called Simufilam. This drug’s developer, Cassava Sciences, also claimed it improved cognition by targeting the amyloid deposits.

The Schrag applied his expertise to “interrogate published images about the drug and its underlying science – for which the attorney paid him $18,000”, according to Science. He was able to identify images that could have been altered or duplicated in dozens of journal articles.

The attorney, whose clients were two neuroscientists who were betting that Cassava’s shares would fall, used Schrag’s findings in a citizen petition submitted to the FDA to call into question the veracity of data in Simufilam trials. Even though the FDA ultimately rejected the petition, Cassava’s shares plummeted.

Schrag continued his investigation and found discrepancies in Lesné’s work, including in the important 2006 Nature paper.

He shared his findings with the NIH, saying his “dossier is a fraction of the anomalies easily visible on review of the publicly accessible data”. The suspect work “not only represents a substantial investment in [NIH] research support, but has been cited … thousands of times and thus has the potential to mislead an entire field of research,” he added.

He also shared his findings with Science.

A week ago, after Schrag had alerted Nature about possible manipulation in the 2006 paper, the journal added a note on the paper’s page saying it had been “alerted to concerns regarding some of the figures” in it. “Nature is investigating these concerns, and a further editorial response will follow as soon as possible. In the meantime, readers are advised to use caution when using results reported therein,” it said.

Schrag hesitated to describe Lesné’s work and the Cassava-related studies as “fraud” or misconduct. Science reported that to prove fraud, he required access to original, complete, unpublished images and raw numerical data.

“I focus on what we can see in the published images, and describe them as red flags, not final conclusions,” he said.

Elizabeth Bik, the noted science integrity consultant, told Science that the authors “appear to have pieced together pieces of photographs from different experiments.”

“The experimental results obtained may not have been consistent with the desired results, and these data may have been modified to … better fit the hypothesis,” she said.

Karen Ashe, another senior author of the 2006 paper, declined via email to be interviewed or to answer written questions posed by Science. However, she posted portions of a few original, unpublished versions of photos used in the 2006 paper that don’t show the “digital cut marks Schrag had detected in the published images”.

“That suggests the markings were harmless digital artifacts,” Science wrote. “Yet the original images reveal something that Schrag and Selkoe find even more incriminating: unequivocal evidence that, despite the lack of obvious cut marks, multiple bands were copied and pasted from adjacent areas,” Science said.

Additionally, Science reported that there are doubts if Aβ*56 even exists. Dennis Selkoe, a Harvard University professor, said in two papers published in 2008 that he could not find Aβ*56 in human fluids or tissues. There is also scarce independent confirmation about the Aβ*56 claims.

“In science, once you publish your data, if it’s not readily replicated, then there is real concern that it’s not correct or true,” Selkoe told Science. “There’s precious little clear-cut evidence that Aβ*56 exists, or if it exists, correlates in a reproducible fashion with features of Alzheimer’s – even in animal models.”

According to Hindustan Times, a research article published in Nature Neuroscience on June 2 questioned the amyloid hypothesis entirely. Researchers found that mice that had been given a form of Alzheimer’s disease “showed damage inside neurons of the brain which occurred prior to the formation of amyloid-containing plaques”.

The paper suggested, according to the newspaper, that while researchers had assumed that amyloid plaques are a cause of Alzheimer’s disease, “it’s possible that they are a consequence of disease progression in certain cases or even coincidental” (emphasis added).

But Schrag and Selkoe said that the doubts about Aβ*56’s role in causing Alzheimer’s shouldn’t call the broader amyloid hypothesis into question – yet. Selkoe added, “I hope that people will not become faint-hearted as a result of what really looks like a very egregious example of malfeasance that’s squarely in the Aβ oligomer field.”

If phase 3 clinical trials of drugs targeting amyloid oligomers fail, then the hypothesis would be “very much under duress.”

But Selkoe also worried that “the Lesné episode might further undercut public trust in science during a time of increasing skepticism and attacks”. Scientists must show they can find and correct rare cases of apparent misconduct, he said.