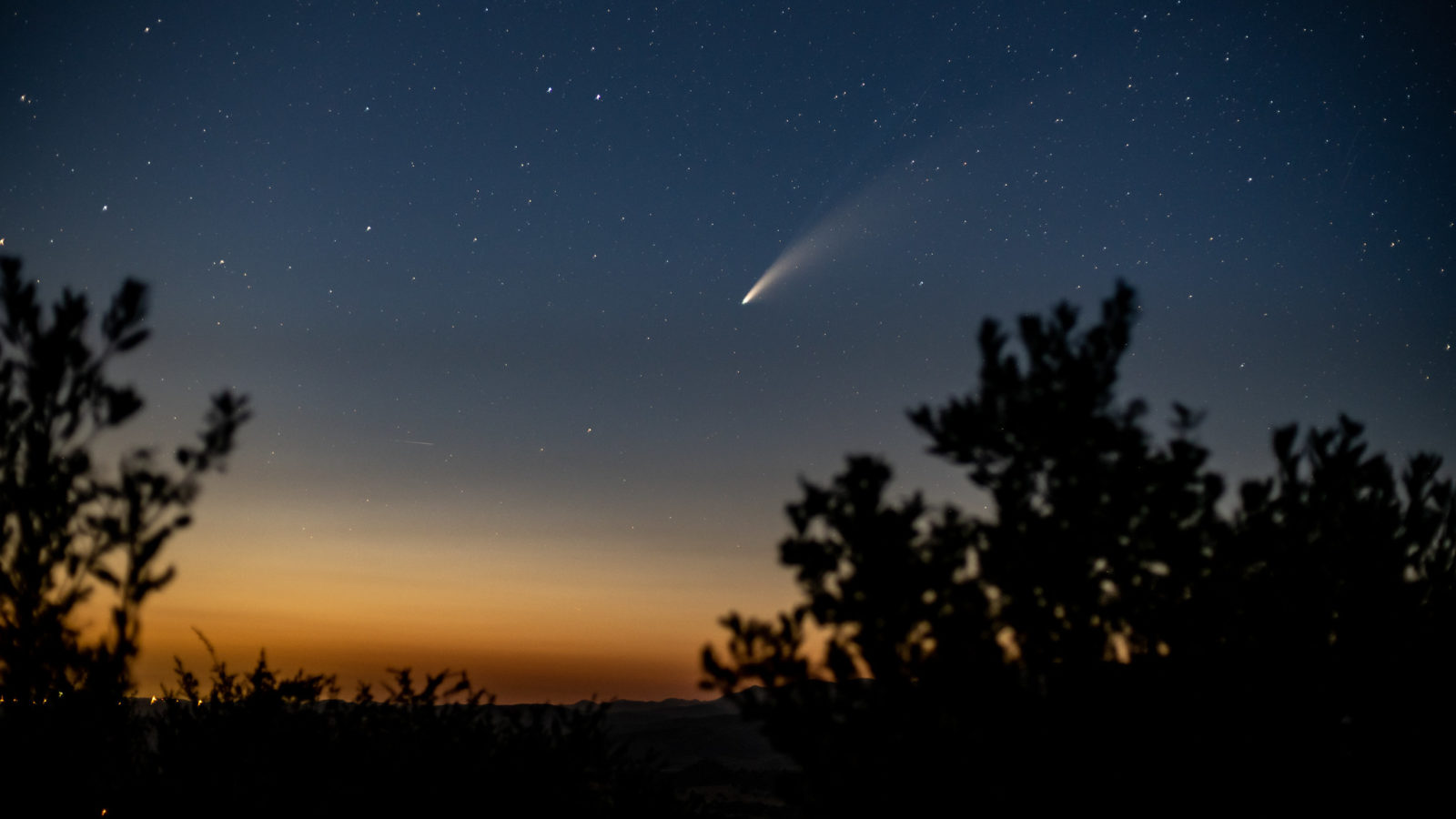 A photograph of Comet Neowise taken in the Santa Ynez Valley, using a D850 and a Voigtländer 58mm manual focus lens. Photo: n28307/Flickr, CC BY 2.0.

Sky-watchers have been enjoying a ringside view of Comet Neowise, the brightest comet to appear in the northern hemisphere in more than 20 years. Named after NASA’s Near-Earth Object Wide-field Infrared Survey Explorer (NEOWISE) probe which spotted it first in March this year, the comet could be seen with the unaided eye since June 30 as it rose and set in the dawn and dusk skies. Having made its closest approach to the sun on July 3, Neowise is currently flying towards the outer Solar System.

The 5-km-wide comet will gradually get dimmer as it moves farther away from the Sun and soon we will only be able to spot it among the field of stars with a telescope. Its orbital trajectory – a wide elliptical arc around the Sun – means its next visit to Earth’s ‘backyard’ will not happen for another 6,800 years.

Since most comets are so faint that they can only be seen with powerful telescopes, scientists are delighted to have had the chance to study Neowise at ‘close’ quarters. This will help comet theorists figure out in more detail the composition and structure of these celestial wanderers.

Comets are essentially frozen balls of ice and rock that swing through the solar system in eccentric orbits. Typically, a cometary nucleus made of ice, gas and dust and less than 50 km across is hidden from view by the coma – a dense halo of iridescent dust, gas, and streaming ice particles. Besides frozen water, cometary ice also comprises compounds like carbon monoxide and carbon dioxide along with many complex organic compounds.

When a comet approaches the sun, some of its surface material boils off to make a ‘tail’ reaching tens of thousands of kilometres in length, which trails the comet like streamers. In fact, it is not unusual for comets near the Sun to sport two tails: one made of dust and gas, and another made of ionised gas (like sodium, as in the case of Neowise). Unlike Neowise, however, comets that pass by the sun too many times have a different destiny. All the ice on such comets could evaporate rapidly, leaving behind just rock and dust – or an asteroid.

Curiously, comets are extremely delicate, thanks to their weak tensile strength – so delicate that you can actually pull a comet apart with your fingers! It is incredible that nature can create an object that is so fragile and yet which stays intact for so long as it wanders around the Solar System for billions of years. Neowise’s long elliptical orbit must have brought it deeper into the solar system where it probably bounced off the outer atmospheres of Uranus, Saturn and Jupiter, slowly gaining in size as more and more space debris hit and stuck to it.

During its closest approach to Jupiter, the uneven tidal forces of the giant planet must have splintered the cometary nucleus and increased its surface area. Along with the dust flung out by the breakup, this enabled the streaming ice-ball to reflect more sunlight and become more visible to our telescopes.

(Editor’s note: A great collection of photographs of Comet Neowise, all under a Creative Commons Attribution license, is available here.)

Comets are also frozen time capsules that still hold material from the early Solar System. They are the remnants of the dust and debris that swirled around the newborn Sun some 4.5 billion years ago before they formed planets. Astronomers believe that as the gases inside a comet get heated on approaching the sun, they bubble up and eject dusty material from the comet, including the ingredients for life. This was confirmed in 2004 when NASA’s Stardust probe flew by comet 81P/Wild and discovered amino acids – the building blocks of life – in the cometary dust. The more we learn about comets, the more likely it seems that these ‘dirty snowballs’ of ice and other frozen gases engendered Earth’s oceans.

But by the same logic, we may also eventually owe our destruction to these celestial travellers. Thousands of pieces of potentially dangerous space debris whiz past Earth every day undetected and it is inevitable that some may slam into the planet at some point. True, Earth is much more likely to be walloped by asteroids and meteors (which are essentially chunks of rocks) than by a comet. Nevertheless, Neowise proves how important it is for humans to bolster their detection systems against such threats from space.

Astronomers had no inkling about the comet’s ‘close encounter’ with Earth until it suddenly dove into the NEOWISE telescope’s field of view four months ago. It is a disturbing thought that many – if not most – near-Earth objects do not cross any telescope’s line of sight as they zoom past Earth in this celestial pinball game.