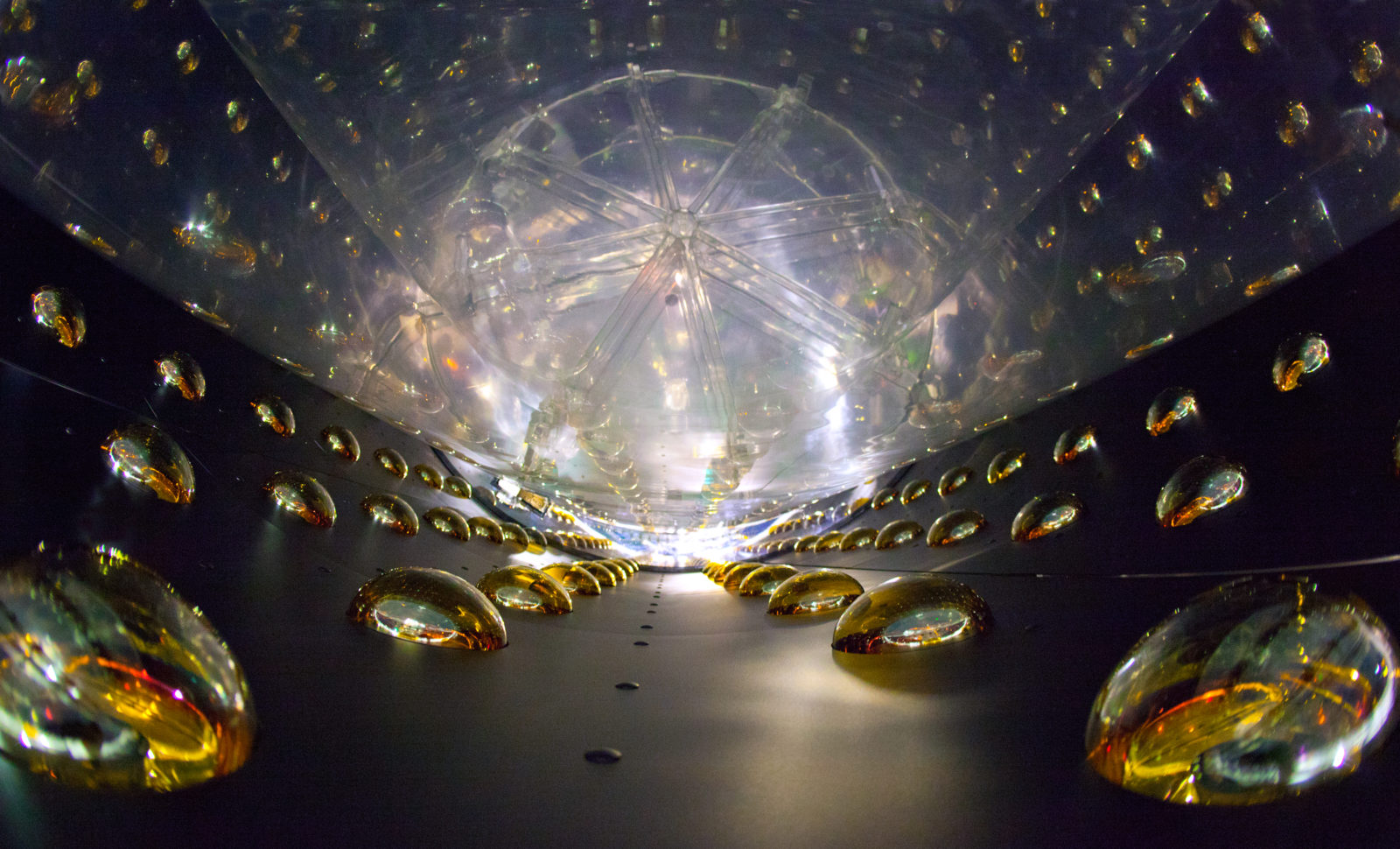 On June 2, scientists from a big physics project in China presented the most precise value yet of an important parameter in neutrino research at a conference happening in Seoul, South Korea. The measurement allows physicists to move one step closer to solving a few longstanding puzzles – but nearer home, it recalls the triumph of a Chinese project and the demise of an Indian one that sought to get there first.

Both the Chinese and the planned Indian projects were designed to study neutrinos – the most-common subatomic particle in the universe that has mass. Neutrinos are extremely light, have no electric charge and rarely interact with matter, so they are very hard to detect and study. Scientists have nonetheless built large detectors that sit quietly for months or even years together, and record every neutrino that happens to bump into the detector material, and its properties.

Studying neutrinos is worthwhile because, like every other subatomic particle, they have also affected the universe in some way. But neutrinos are special because they behave in a unique way that we don’t understand, which means we don’t know which puzzles they can help us solve. Many physicists believe that neutrinos can tell us about how dark matter decays (if it does) and provide insights into the quantum nature of gravity.

Key to getting all these answers is a number known as θ13 (pronounced “theta-one-three”). Nine years ago, I had a chat with M.V.N. Murthy, a theoretical physicist and now a retired professor at the Institute of Mathematical Sciences, Chennai, where he told me about it. My memories of news about the INO have since been indelibly linked to θ13.

Neutrinos come in three types, or three flavours: electron neutrino, muon neutrino and tau neutrino. When a neutrino of one flavour flies through space, it can transform into a neutrino of a different flavour. When this happens, the neutrino is said to have oscillated. We don’t know how exactly neutrino oscillation happens. We also don’t know which neutrino flavour is the heaviest and which is the lightest. But we would like to.

Scientists use a grid of nine parameters to answer physics questions about neutrinos. Six of them are expected to tell us about the neutrino mass hierarchy. Three of them, called the mixing angles, have to do with how the three neutrino flavours mix with each other. If we need answers to those questions, we need the values of each of these parameters.

In 2007, when Chinese physicists designed the Daya Bay Neutrino Detector Experiment, the value of only one of the three mixing angles remained unknown: θ13. Its value described the frequency with which the electron neutrino oscillated into one of the other flavours.

In 2015, the Indian government approved a proposal by a group of Indian physicists to build the India-based Neutrino Observatory (INO) in Theni, Tamil Nadu, and allocated Rs 1,500 crore. Murthy and other members of the INO collaboration told me that the observatory would help measure θ13 with higher precision as well as resolve some important, related issues.1

Neutrinos oscillate differently when they are passing through air versus through matter, like solid rock. So the INO detector – which would be placed inside a hollowed-out mountain, creating a natural barrier to filter out other radiation – would track muon neutrinos coming from above, through the atmosphere, and those from below, through the earth. Based on the fraction of ‘missing’ electron neutrinos (because they would have oscillated) in each source, the project would provide scientists with a way to estimate the probability of the electron neutrino flavour oscillating to another, and the hierarchy of masses as well.

Today, however, the INO is staring at a bleak future.

Also read: Why India’s Most Sophisticated Science Experiment Languishes Between a Rock and a Hard Place

At the physics conference in Seoul, researchers from the Daya Bay project presented the most precise value of θ13 so far. In 2012, researchers from the same project had reported the first conclusive measurement of θ13 – a value much higher than expected. It heightened interest in neutrino physics and encouraged the INO collaboration to push for the project’s approval and also got them excited about what they might find.

Some believe the answer to why the universe has more matter than antimatter lies hidden in the differences between neutrinos and antineutrinos. “Having measured all three mixing angles, physicists can now pursue the next set of ambitious experiments to study what is called CP violation, or charge-conjugation and parity violation,” a 2012 press release from Caltech, which was collaborating on the Daya Bay project, quoted its physicist Robert McKeown as saying. “If CP violation is true, then particle reactions can occur at rates that differ from those of reactions involving the particles’ antimatter counterparts.”

The announcement did two more things: it told Chinese researchers that they were on the right track and it told the world that these researchers knew how to build and operate a neutrino detector. Both of them helped China stitch together an international collaboration that contributed funds and knowledge for the Jiangmen Underground Neutrino Observatory, or JUNO. JUNO is expected to succeed Daya Bay and provide the next big insights into neutrino oscillation – together with a few of its state-of-the-art peers around the world. These are DUNE in the US and Super-Kamiokande in Japan (which is being upgraded).

The Indian physicists had hoped INO would be one of them, but that seems unlikely. The Indian government approved the INO on January 5, 2015, while the groundbreaking ceremony for JUNO, in Southern China, happened five days later. But since then the trajectories of the two projects have taken opposite directions – with good reason.

According to an update from the Chinese Academy of Sciences on April 28, 2022, the construction for JUNO is well underway and will be completed next year. China has historically been able to push through large projects even in the face of strident local opposition. This ability was also on display when its government was able to enforce strict lockdowns in Shanghai and other cities earlier this year, in spite of much local resentment.

On the other hand, in February this year, the Tamil Nadu government filed an affidavit in the Supreme Court asking that the Union government call the INO off. The application followed an appeal by Tamil Nadu Chief Minister M.K. Stalin to Prime Minister Narendra Modi last year to shut the project after environmentalists as well as locals were concerned about the project’s effects on a tiger corridor nearby. It was the latest hurdle in a long line of hurdles, motivated at various times by distrust of science, notions of entitlement, mistrust of government, procedural irregularities, ecological concerns and – inevitably – a loss of purpose.

The Daya Bay announcement in 2012 had spurred work on both INO and JUNO, in two different countries. Initially, members of the collaboration told me that once the INO began operations, it would recapture the pole position in neutrino astronomy that India once possessed. They also said that if both instruments were to begin operations together, they could work together to complement and validate each others’ findings.

But in time, and even as the construction delays stretched on, physicists also began to pitch ideas to adapt or repurpose the project site to include experiments related to dark matter and other areas. The proposal would need only a few tweaks, the logistics had already been worked out, the collaboration had almost all the approvals necessary and, most of all, repurposing would keep years of work towards what was purported to be India’s first Big Science project from being squandered.

Members of the INO collaboration were hopeful, at least until last year, that their project would one day come to life. But it also seems evident that the interest in the next big neutrino project has shifted away from India. There is only so much appetite internationally to fund and support a neutrino experiment. This is why the ‘I’ in ‘INO’ stands for India-based, not Indian.

As of October 2021, based on findings at different neutrino projects around the world, the value of θ13 had been estimated to be 8.20º to 8.93º. At the Seoul conference, the Daya Bay collaboration reported that it had been able to improve the precision of the measured value to 2.8%. 2 The Daya Bay project has also officially closed, passing its baton on to JUNO. And JUNO can apparently take the precision below 1% and thus provide sharper insights into the universe’s mysteries.

The Wire Science@TheWireScience
4 Following 27.7K Followers
Poorly designed suspension bridges are also susceptible to other forms of failure not common to other designs, like… https://t.co/pYPK8WrJRR
2 days ago
1
Opposition for a mustard hybrid DMH-11 comes from the government’s obstructionist approach to regulating transgeni… https://t.co/SjwdaizSJ7
2 days ago
2 7
ISRO has ordered 10 LVM3 vehicles from industry over the next five years, at a rate of production of three vehicles… https://t.co/vaW43dZznd
2 days ago
2 4
RT @LandConflicts: #LCWThread #COP27 is indeed a historic win for developing countries. Our researchers @rad2306 and @7meerukat tracked th…
2 days ago
9
Siddhartha Mukherjee's new book, The Song of the Cell, while pulling back from the subcellular plot of DNA, throws… https://t.co/EJatmlsrYz
2 days ago
3 16
As humans evolved, the demands of the growing population, associated knowledge creation and energy use created a fe… https://t.co/CNfexJpoYA
2 days ago
A study published in February said the world’s glaciers now contain far less ice than previously thought, having lo… https://t.co/RrPadYn4Za
2 days ago
Yitang Zhang has claimed that he has disproved a weaker version of the Landau-Siegel zeroes conjecture, an importan… https://t.co/EDDpuBcyOU
2 days ago
1 2
Lucy Cooke writes about the ‘monogamy myth’ with wry humour, “if you want to know how promiscuous the female of th… https://t.co/cst3SlKFVG
2 days ago
5 7
Measures to control or eradicate invasive plants such as Lantana camara and Chromolaena odorata will further drive… https://t.co/VJwrMLaE1a
3 days ago
4 3
A 2021 report found that deliveries from Black Friday sales were estimated to release about 0.12% of the country’s… https://t.co/NbYxoArAuH
3 days ago
"We would make a mistake to think that the battle for equal water rights was a campaign for equal rights in a gener… https://t.co/g6Zpu36Vtz
3 days ago
1
In 1972, highly accurate atomic clocks laid bare the fact that days are not exactly 86,400 standard seconds long. T… https://t.co/yS8Qc6KPRa
4 days ago
1 2
Hannah Arendt was keenly interested not only in Adolf Eichmann as an individual, but also the underlying and larger… https://t.co/tBTN3jef3v
4 days ago
1 2
Black Friday sales have caught on across the world and the shopping frenzy usually generates billions of profit dol… https://t.co/8jnT4xjlDw
5 days ago
2
Contact us