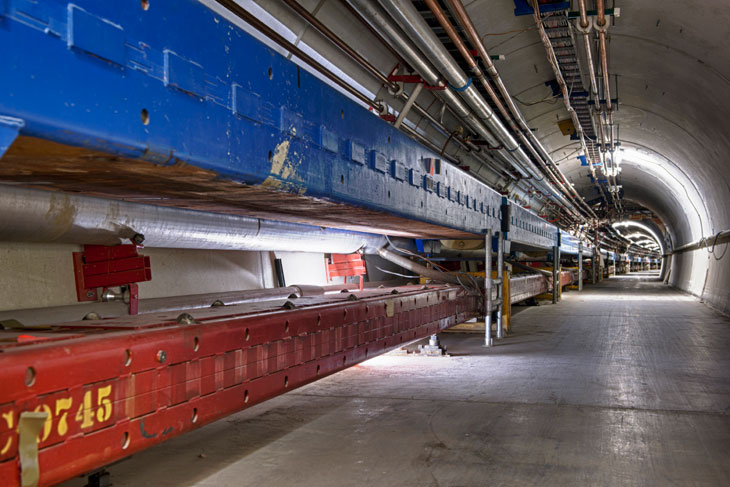 A view of the Tevatron, the particle accelerator used to discover the top quark in March 1995. Photo: fnal.gov.

The fundamental particles are the smallest known constituents of nature that, bit by little bit, make up our vast universe as we know it. Making full sense of their properties and behaviour is essential to understanding why reality is the way it is, and the way it might be in the distant future.

One such particle is the top quark, whose discovery was announced 25 years ago on March 2, 1995, at the Fermilab facility in Illinois, USA. It holds a unique position in the panoply of particles because it is freakishly massive – with more mass in fact than an atom of iron, somewhat more than an atom of tungsten, and just about as much as an atom of rhenium (atomic number 75). The second-heaviest fundamental particle, the bottom quark, is 40-times lighter.

In a paper published in the journal Physical Review Letters on July 17, 2014, a team of American researchers had reported the most precisely measured value yet of the mass of the top quark. Its mass is so high that can exist only in very high energy environments – such as inside powerful particle colliders or in the very-early universe – and nowhere else. For this, the American team’s efforts to measure its mass come across as needlessly painstaking. However, there is an important reason to get as close to the exact value as possible.

That reason is 2012’s possibly most famous discovery. It was drinks-all-round for the particle physics community when the Higgs boson was discovered by the ATLAS and CMS experiments at the Large Hadron Collider (LHC). While the elation lasted awhile, there were already serious questions being asked about some of the boson’s properties. For one, the Higgs boson they had discovered turned out to be much lighter than what they expected based on theoretical calculations. Proponents of an idea called naturalness had figured the boson would have been 1019-times heavier.

Each Higgs boson is a small packet of energy produced by excitations of an energy field called the Higgs field, which permeates through the whole universe. As a result, the boson’s mass is closely tied to the universe’s properties, such as size. For example, since the Higgs boson they had found was much lighter, calculations suggest our universe should be the size of a football. It clearly isn’t, but physicists don’t where they’re going wrong.

In the second week of September 2014, Stephen Hawking said the Higgs boson would cause the end of the universe as we know it. Because it was Hawking who said and because his statement contained the clause “end of the universe”, a ridiculous media hype followed. What he actually meant was that the ‘unnatural’ Higgs boson mass had placed the universe in a difficult position.

In the natural order of things, all objects – whether stars or electrons – like to have as little energy as possible, and shed the excess at the first opportunity. The same goes for the universe as well. However, the mass of the Higgs boson has trapped the universe at a higher energy level instead. Think of it as a boulder that has rolled down the side of one mountain into a valley. It would like to get to the plateau, where its potential energy would be lowest, but in its path is a shorter mountain blocking its way. Similarly, while the universe is in a lower-energy than before, it needs to do some work to get to its lowest energy state.

Someday, according to Hawking, the universe might increase in energy (roll up the second mountain) and then collapse into its lowest energy state (the plateau). But that day is trillions of years away.

The mass of the top quark has a big part to play here. Fundamental particles like the top quark possess their mass in the form of potential energy. They acquire this energy when they move through the Higgs field, which is spread throughout the universe, and couple to Higgs bosons. Some particles acquire more energy than others. How much energy they get depends on two things: the strength of the Higgs field (which is constant), and the Higgs charge of each particle.

Also read: Is the Universe As We Know it Stable?

The Higgs charge determines how strongly a particle engages with the Higgs field, or how strongly it couples with the Higgs boson. Top quarks have the highest Higgs charge among all the fundamental particles, which is why they are the heaviest fundamental particles. And this unique connection between the top quark and the Higgs boson is also what makes the top quark an important focus of research.

Getting the mass of the top quark just right is important for us to better determine its Higgs charge, ergo the extent of its coupling with the Higgs boson, ergo better determining the properties of the Higgs boson itself. Even small deviations in the value of the top quark’s mass could spell drastic changes in our knowledge of when or how our universe will roll from the valley to the plateau.

If it does, all our natural laws could change, their consequences rippling out through the universe at the speed of light. The cosmos as we know it will have to remake itself.

The American team that measured the mass of the top quark used values obtained from the D0 experiment on the Tevatron particle collider at Fermilab. The Tevatron was shut in 2011, so their measurements are the collider’s last words on top quark mass: 174.98 ± 0.76 GeV/c2 (the Higgs boson weighs around 126 GeV/c2; a gold atom, considered pretty heavy, weighs around 210 GeV/c2). This is a precision of better than 0.5%, the finest yet. Data from the LHC will constantly update this value.

This article was originally published on the author’s blog on October 15, 2014, and has been edited for clarity.