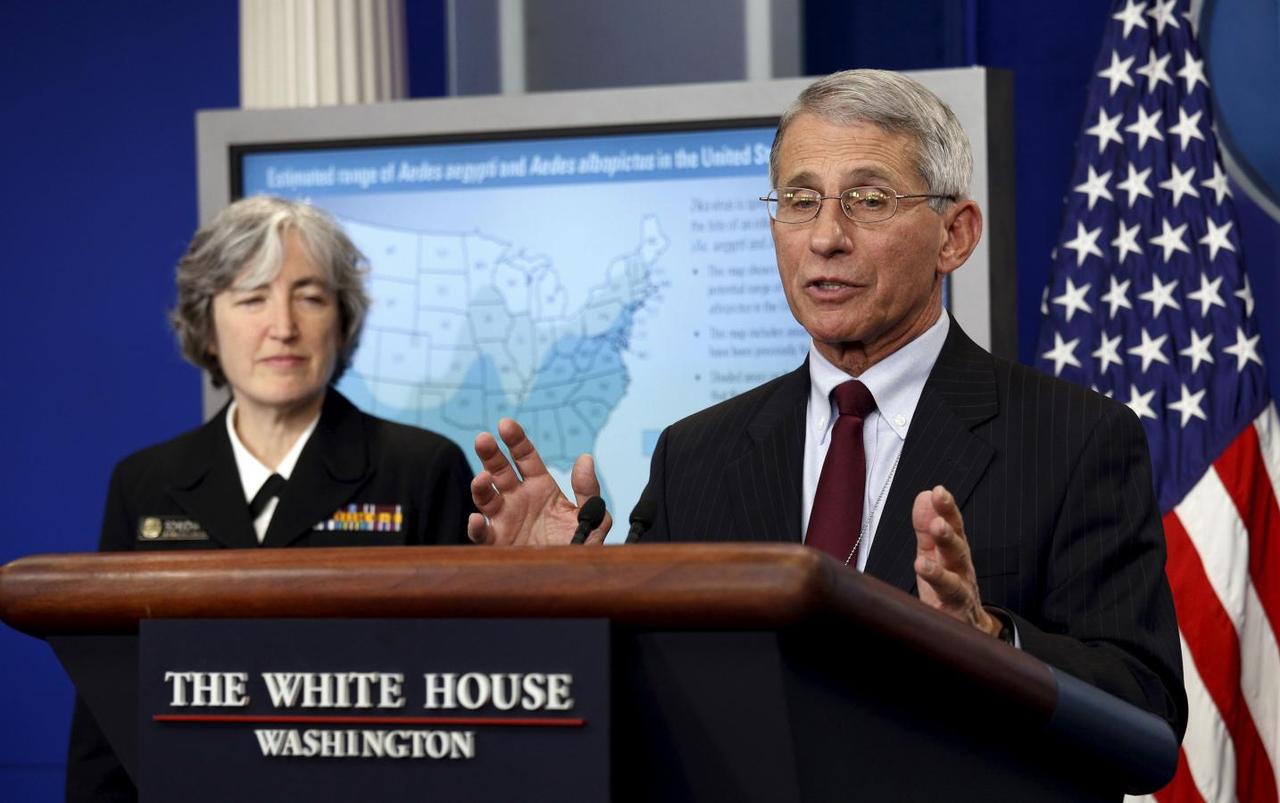 Anthony Fauci and Anne Schuchat, then principal dy. director of the CDC, at a White House briefing in April 2016. Photo: Reuters/Kevin Lamarque

Bengaluru: Earlier this month, former New York Times and Science reporter Nicholas Wade published a 10,000-word article on Medium arguing that the possibility that the novel coronavirus was a human-engineered pathogen and that it had escaped, accidentally or otherwise, from a lab in Wuhan, China, couldn’t be dismissed out of hand.

Soon after it was published, Wade’s article was seized upon by both political commentators and conspiracy theorists; it also drew comments from some scientists that the virus’s origins warrant further investigation. At the same time, the people whose research Wade criticised in the article, including Anthony Fauci, have hit back at the article and said Wade has got many of his facts wrong.

In his article, Wade cited the work and comments of molecular biologist Richard Ebright and virologist David Baltimore, among others. His principal argument centred on the furin cleavage site. This is the part on the virus where a human-body molecule called furin chops off two parts of the virus to help the latter attach to a cell. Wade argued that the cleavage site’s properties suggested controlled manipulation, not natural evolution.

He drew on other research to insist a circumstantial case could be made that the virus was born in a lab, not in the wild. He also alleged that the US National Institute of Allergy and Infectious Diseases (NIAID) had funded gain-of-function (GoF) research at the Wuhan Institute of Virology. Fauci heads the NIAID. GoF refers to manipulating viruses to add functions they haven’t evolved to have, ostensibly in an effort to understand how they might affect humans.

At a Senate hearing on May 10, Kentucky senator Rand Paul and Fauci interrupted each other in a conversation about the virus’s origins. Paul alleged first that the US National Institutes of Health (NIH) – of which NIAID is a child organisation – funded GoF research at the Wuhan Institute. This is one of the claims in Wade’s article. According to The Hill, Fauci retorted: “Sen. Paul, with all due respect, you are entirely, entirely and completely incorrect. The NIH has not ever, and does not now, fund ‘gain of function research’ in the Wuhan Institute.”

NOW – Dr. Fauci: “NIH has not ever and does not now fund gain of function research in the Wuhan institute”pic.twitter.com/CiMA22ueGX

According to Fauci, the NIH gave a grant to EcoHealth Alliance, “a nonprofit focused on research that aims to prevent pandemics” (source), which in turn passed a part of it to the Wuhan Institute – but not for GoF research. The Hill reported, “Fauci noted that although the NIH did fund a project at the Wuhan lab, it was not meant for ‘gain of function’ research into human-made superviruses” but to investigate bat viruses that could infect humans in future.

Wade also criticised Peter Daszak, president of EcoHealth Alliance, on two fronts. First, for failing to disclose a conflict of interest after he put together a group of experts in the pandemic’s early days to claim the virus couldn’t have come from any lab. The conflict was that Daszak had funded work at the Wuhan Institute. Second, Wade alleged that neither Daszak nor anyone else could have known the virus’s origins so early into the pandemic – February 2020 – so claiming it couldn’t have come from a lab at that time was disingenuous and “unscientific”.

Another person, Kristian Andersen, virologist at the Scripps Research Institute, and his colleagues had also claimed in a research letter in Nature in March 2020 that the virus had evolved naturally. Wade wrote that the Andersen group’s conclusion was “grounded in nothing but two inconclusive speculations”.

Daszak has called Wade’s piece “biased, disingenuous and wildly erroneous,” and speculated that Wade “got paid” to write it. Daszak also cited a Wall Street Journal article (paywalled) that quoted a statement issued by the NIAID:

“The research by EcoHealth Alliance, Inc. that NIH funded was for a project that aimed to characterise at the molecular level the function of newly discovered bat spike proteins and naturally occurring pathogens. Molecular characterisation examines functions of an organism at the molecular level, in this case a virus and a spike protein, without affecting the environment or development or physiological state of the organism. At no time did NIAID fund gain-of-function research to be conducted at WIV.”

When pressed by the newspaper for a straight answer to its query – whether the instituted conducted GoF research – the NIAID added: “WIV is a Chinese institution which we assume has multiple sources of funding. It is impossible for us to be aware of nor can we account for all of their activities.”

Andersen also published a technical Twitter thread purporting to rebut Wade’s claims, starting by saying, “The SARS-CoV-2 furin cleavage site is yet again in the news – this time because of a quote by Nobel laureate David Baltimore. The site is not a ‘smoking gun’, nor does it ‘make a powerful challenge to the idea of a natural origin’. Quite the opposite”.

The devil is indeed in the detail. Many, many, many issues with that piece that I’m not going to get into, but it’s worth pointing out that the “mysterious FCS” is the only specific argument put forward to support lab leak in Nick’s article. And it’s false.

Wade had also written that the novel coronavirus is the only coronavirus known to have a furin cleavage site with a certain genetic coding that he said was unusual. Andersen countered: “There is nothing mysterious about having a ‘first example’ of a virus with an FCS. Viruses sampled to date only give us a teeny-tiny fraction of all the viruses circulating in the wild. Fragments – such as the CTCCTCGGCGGG1 – come and go all the time.”

Andersen also argued that if the encoding was unusual, it should have gone away as the virus replicated and mutated, leaving later strains with the more ‘usual’ encoding. He added, after more technical posts, that “Baltimore’s first point – that the FCS found in SARS-CoV-2 is somehow unusual – is simply incorrect. FCSs are found in a multitude of different coronaviruses” and that the fingerprint in question “can be found in other coronaviruses”.

Other experts that The Wire Science has corresponded with in the course of its reportage have said that there is no conclusive evidence for any argument about the novel coronavirus’s origins. Scientists will need to conduct more research, sequence more samples of the virus from different parts of the world and undertake ground-level studies in areas hosting the animal population among which the virus could have first circulated.

The last part has been complicated, however, by China’s attempts at every turn to control or block access to the Wuhan Institute of Virology and hospitals in the Hubei province. A team of investigators led by the WHO, and including Daszak, visited Hubei earlier this year. The report they published after their trip said that the virus most likely originated naturally and not in a lab, adding that the team would continue its investigation and may return to China in future.

According to The Hill, “The White House said it believes that China has ‘not been transparent’ in releasing its findings on the origins of COVID-19, and the WHO was severely limited in its investigation.” Earlier, the New York Times had also reported that the WHO may have given China too many concessions for favourable treatment in return. As The Wire Science reported:

The newspaper accessed internal documents and conducted interviews with more than 50 public-health officials, scientists and diplomats that show how the “disempowered” WHO was eager to “win access and coordination” from China but achieved neither. The documents also show that China was able to extract concessions from WHO which allowed the government to delay important research and avoided a “potentially embarrassing” review of its early response.

At the Senate hearing, Fauci repeated: “I do not have any accounting of what the Chinese may have done, and I’m fully in favor of any further investigation of what went on in China. However, I will repeat again, the NIH and NIAID categorically has not funded gain of function research to be conducted in the Wuhan Institute.”