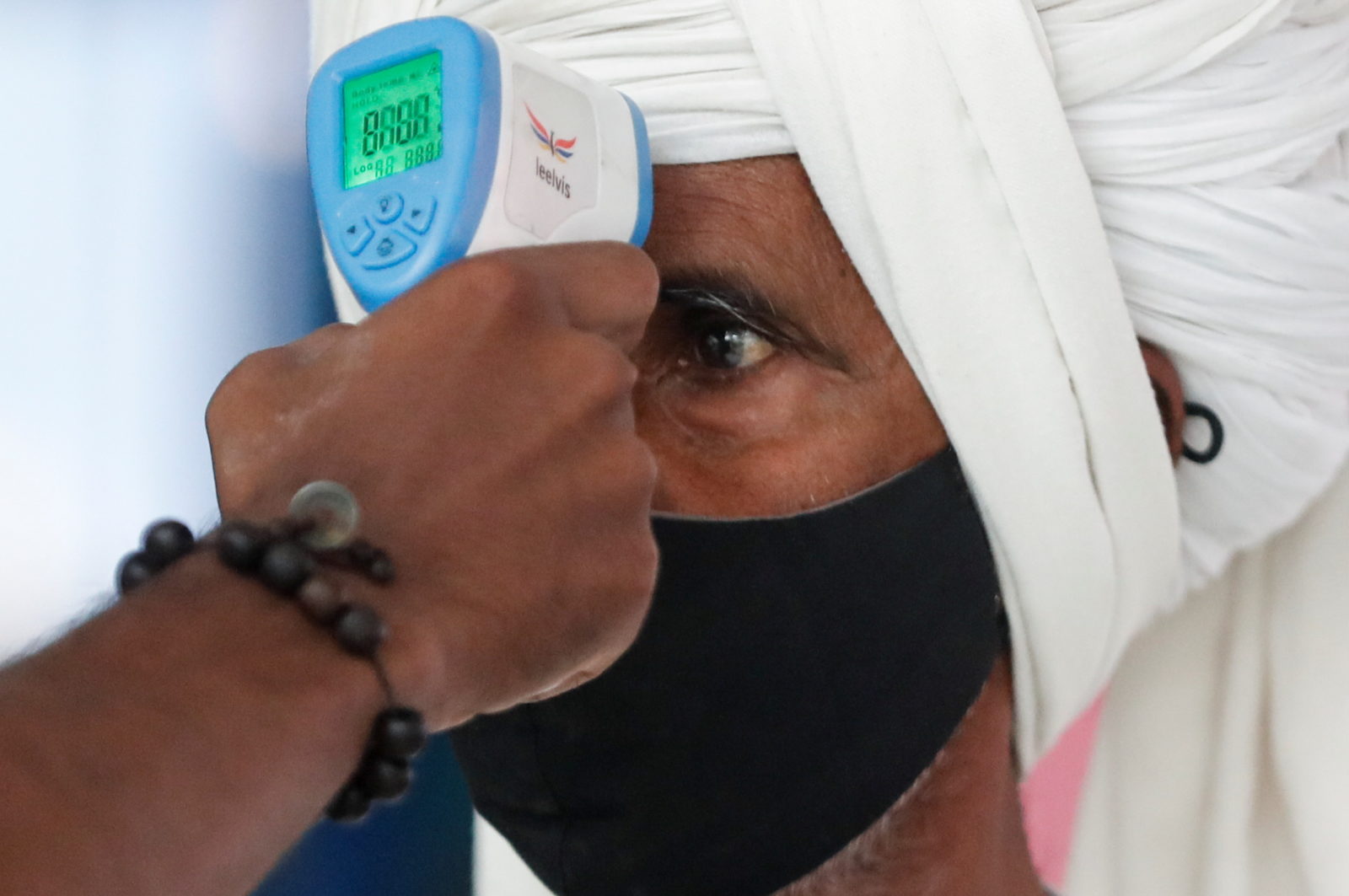 A health worker uses an infrared thermometer to check the temperature of a passenger at a railway station in Mumbai, March 21, 2021. Photo: Reuters/Francis Mascarenhas.

New Delhi: The number of COVID-19 cases in Mumbai has increased by 217% since March 1, with more than 5,500 people having tested positive this month, Hindustan Times has reported.

The Brihanmumbai Municipal Corporation (BMC) shared an update at 7:32 pm on March 25 saying the city’s tally of total cases stood at 3.74 lakh and the number of active cases at 30,760. With six deaths in the last 24 hours, the cumulative fatality count stood at 11,606.

According to Times of India, BMC conducted 47,000 COVID-19 tests on March 24, of which over 5,400 reports were positive – at a positivity rate of around 12%. The newspaper also reported that the BMC has thus far vaccinated 10 lakh people in the city; Mumbai’s total population in 2011 was 184 lakh.

City officials quoted by NDTV said they are preparing hospital beds to accommodate 10,000 cases a day. BMC commissioner Iqbal Singh Chahal also told NDTV that despite the big numbers, the situation in Mumbai was under control.

“Assuming the number of daily patients increases to 10,000 and 15% of them would be symptomatic – needing 14 days of hospitalisation – the requirement would be of approximately 21,000 beds,” according to Chahal.

The BMC also plans to increase the number of beds for mildly symptomatic patients in COVID-19 care centres to 50,000.

In July 2020, Mumbai had a recovery rate of 69% and the BMC had reserved 17,000 beds for people with moderate to severe COVID-19, according to Hindustan Times.

Dr Rahul Pandit, a member of the Maharashtra COVID-19 task force, reportedly said on Wednesday, “Though most patients are asymptomatic and don’t require admission, we need to be ready for the worst.”

At present, there are no plans to turn major hospitals into dedicated COVID-19 hospitals – something the BMC had done last year.

Suresh Kakani, additional municipal commissioner, also told Hindustan Times that the city was mindful of the need for non-COVID-19 beds as well. “So until we run out of all beds, we don’t want to convert any major hospital.”

As of March 25, the city had 40 active ‘containment zones’ and officials had sealed 457 buildings that had reported five or more cases each. Another Hindustan Times report noted that the number of these zones has been more or less stagnant.

According to official data, BMC officials had recorded 23,002 COVID-19 cases in January and February 2021, of which 90% lived in high-rise buildings while the rest resided in slum areas.

In September 2020, Murad Banaji, a mathematician with an interest in disease-modelling, had written for The Wire Science that different kinds of tests alone couldn’t explain Mumbai’s rise in cases at the time. It’s unclear if a similar mechanism could be in play today.

“We are also looking at why only Maharashtra has a sudden spike,” Shekhar Mande, director general of the Council of Scientific and Industrial Research, told NDTV. “Maybe in some states, more people were asymptomatic and have antibodies now.”

Prime Minister Narendra Modi and other members of the national government have said on multiple occasions that people’s failure to abide by COVID-19-appropriate protocols has brought India to the cusp of a ‘second wave’.

Another significant cause for concern has been the [circulation of mutant strains in the population. Scientists have already reported that ‘variants of concern’ are more contagious, perhaps even deadlier. But a national programme to sequence viral genomes from different parts of the country has been slow to get going.

Given the surge, BMC has announced that celebrating Holi on March 28 and 29 will be disallowed in both private and public places, and that its officials will act against violators under the Epidemic Diseases Act 1897 and the Disaster Management Act 2005.