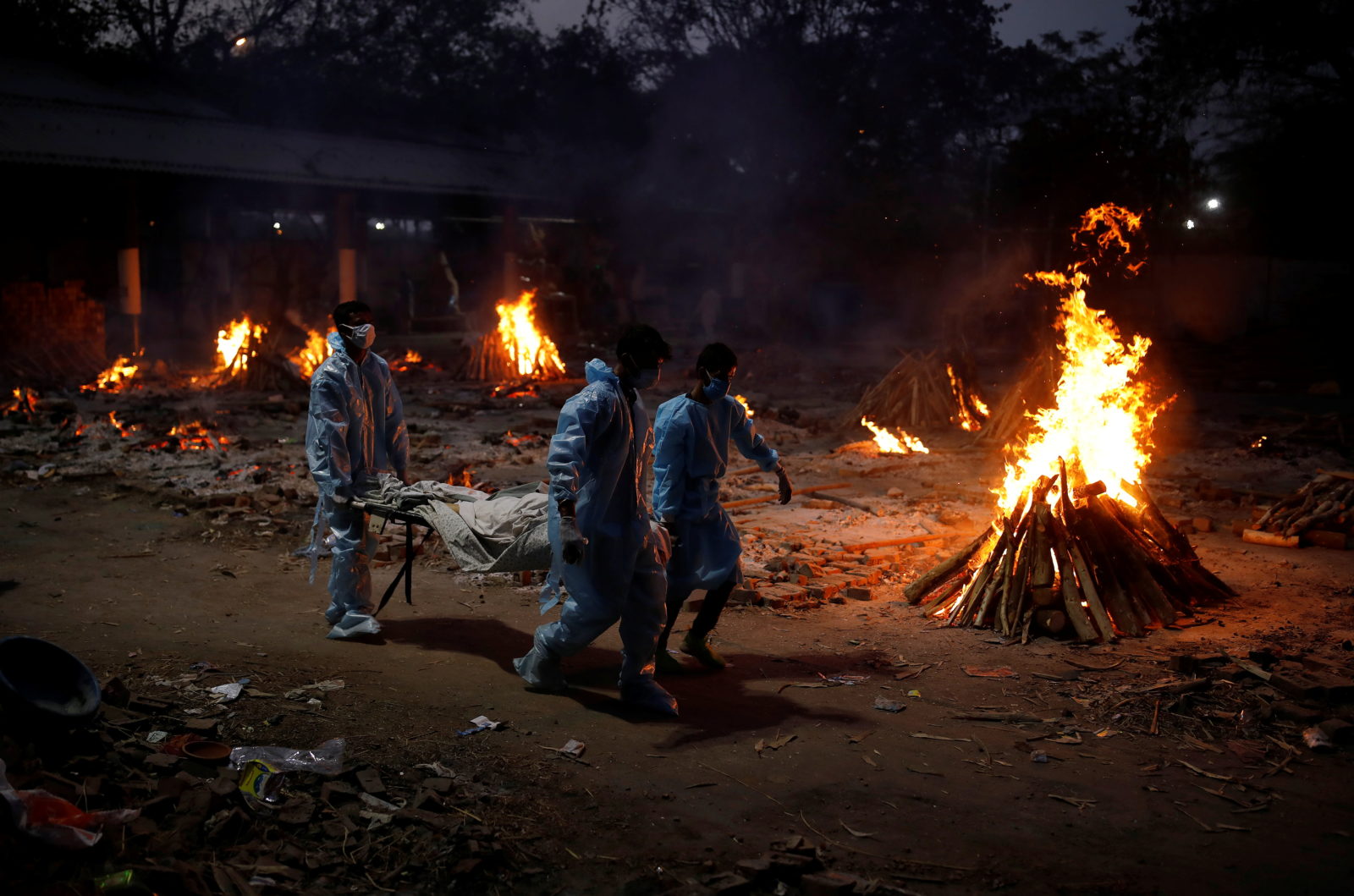 People carry the body of a man who died from COVID-19 at a crematorium in New Delhi, May 3, 2021. Photo: Reuters/Adnan Abidi

Bengaluru: Even as scientists have acknowledged flaws in a disease transmission model that may have led the government to believe India’s second COVID-19 wouldn’t be too bad, notable members of the government’s science-oriented bodies have pushed back on reports, including by The Wire, that the powers that be ignored scientific data that would have allowed India to anticipate the brutality of the wave.

Even though it predicted a rise in infections – 1.2 lakh daily new cases by mid-May – that ought to have been acted upon by the government as it corroborated the possibility of a second wave, its numbers underestimated the problem because the disease transmission model used was suited more to explaining the past than to predicting the future, according to scientists who spoke to The Hindu.

The Department of Science & Technology had put together a committee to study the spread of the novel coronavirus in India and to recommend policy interventions to help the government close out the epidemic as quickly as possible. The committee members were M. Vidyasagar (IIT Hyderabad), who was also the chair; Manindra Agrawal (IIT Kanpur); Lt Gen Madhuri Kanitkar (Ministry of Defence); Biman Bagchi (Indian Institute of Science); Arup Bose and Sankar K. Pal (Indian Statistical Institute); and Gagandeep Kang (CMC Vellore).

The team used a data-centric ‘supermodel’ to conclude, in October 2020, that India’s wave at the time was past its peak. In late February, Agrawal said in an interview that the model suggested there would be 5 lakh more cases or so in the ten weeks to come.

But since then, especially from the second half of April 2021, India’s COVID-19 case load has accelerated to register the fastest growth rate in the world, in the pandemic’s brief but intense history. The Government of India was caught off-guard by the ferocity, so much so that the healthcare systems in many states suffered very public breakdowns, further exacerbating the second wave. In particular, many people, including experts, have blamed the government for failing to anticipate the vaccine and oxygen shortages.

There has been apprehension in scientific circles that the government seized on the supermodel and developed the impression that India’s second wave would be more manageable. However, Agrawal told The Hindu that the supermodel could make predictions but only if it assumed that the “phase” – significant characteristics of the wave – didn’t change.

Gautam Menon of Ashoka University, Sonepat, had written for The Wire Science earlier noting that a phase change had happened: there were new variants of the novel coronavirus in circulation, some of which were better at evading the immune system, and the population’s immunity also could have faded. As a result, he wrote, “The parameters that enter models of how cases might increase now need to be changed by unrealistic amounts to account for the current rise. Beyond a point, the conservative assumption of continuity from the past must be abandoned.”

Also read: COVID-19 Is Surging In India – but Will There Be Fewer Deaths This Time?

Agrawal also said that the first national seroprevalence survey’s results, which the supermodel used, could have been misleading. The survey, conducted by the Indian Council of Medical Research (ICMR), said that 0.73% of India’s population could have been exposed to the novel coronavirus by June 2020. But Agrawal said the number was likely much lower, leaving more of the population still susceptible to being infected. (Also recall that ICMR published the survey paper only 14 weeks after the survey ended.)

Science has also reported that the supermodel may have been undermined by what it didn’t use: granular data that the ICMR has been collecting from the people getting tested for COVID-19. But as it happens, ICMR has “dragged its feet” on widening access to this data, prompting over 700 researchers to write to Prime Minister Narendra Modi.

While the government may have seized on the supermodel because its conclusions fit the preconceived notions of India’s political leaders, other government functionaries have pushed back – in one instance in a nasty way – against assertions by experts that politicians wilfully ignored early warnings of potentially dangerous variants.

Indeed, the ‘phase change’ that both Menon and Agrawal have referred to is also what was on top of the Indian SARS-CoV-2 Genome Sequencing Consortium (INSACOG).

In the second half of last year, the Indian government set up INSACOG to collect samples of the virus from different parts of the country and sequence their genes to understand which strains were common where. Last week, four members of this consortium said that they had told at least the Union health secretary of a dangerous new variant in the population that could aggravate India’s crisis.

Reuters reported that it “could not determine whether the INSACOG findings were passed on to Modi himself.” However, Rakesh Mishra, until recently the director of the Centre for Cellular and Molecular Biology, (CCMB) Hyderabad, whose facilities are part of the consortium, told The Wire yesterday that it was “impossible to believe Modi wasn’t told”.

In an interview with Karan Thapar for The Wire, Mishra lambasted political leaders for the abject failure to contain India’s COVID-19 epidemic, and alleged that they had acted in defiance of information about the virus and its spread that was available.

“It was a high concern and there’s no doubt about it,” Mishra said. “We were very, very concerned”, and that INSACOG was “dreading something bad would happen”.

A little earlier, after trying for many months to interview the principal scientific adviser (PSA) K. VijayRaghavan, vaccine delivery expert group chief V.K. Paul and ICMR head Balram Bhargava, Thapar published a list of 35 questions he would like them to answer. These three men are India’s top scientists in the government, and independent experts have criticised them repeatedly for failing to ensure India’s response to COVID-19 was evidence-based.

The latter continues to be met with silence from the government – but Mishra’s comments in his interview have drawn rebukes from at least two senior science-related officials in the government: Department of Biotechnology secretary Renu Swarup and senior advisor in the PSA’s office Shailja Gupta.

In an interview with Economic Times, Renu Swarup said that Mishra retired from service on April 30 and that all decisions “are made by the core group”, implying that Mishra didn’t belong in this group. However, she ignored the fact that Mishra was in service and very much  part of the core group at the time INSACOG warned the government, which was in March.

Swarup disputed the use of the word “warning”, and added, “My department is leading the INSACOG initiative and I never saw any such report which said that numbers will go very high or rise exponentially.”

After a few scientists shared the video of the Mishra-Thapar interview on Twitter and remarked that more scientists should speak up, Shailja Gupta, a senior adviser in the Office of the PSA, tweeted the following response: “Best they don’t, their internal recorded discussions at high level meetings will reveal a very different story.”

Gupta’s Twitter bio says that her views, presumably those expressed on the social media platform, are those “of a free citizen”, but she wielded her knowledge of closed-door meetings to say that Mishra and others shouldn’t speak up.

Many other scientists and other observers responded saying that instead of making veiled references to allegedly compromising information or even threatening those who are speaking up, Gupta should release the minutes of all meetings attended by government officials and scientists vis-à-vis COVID-19.