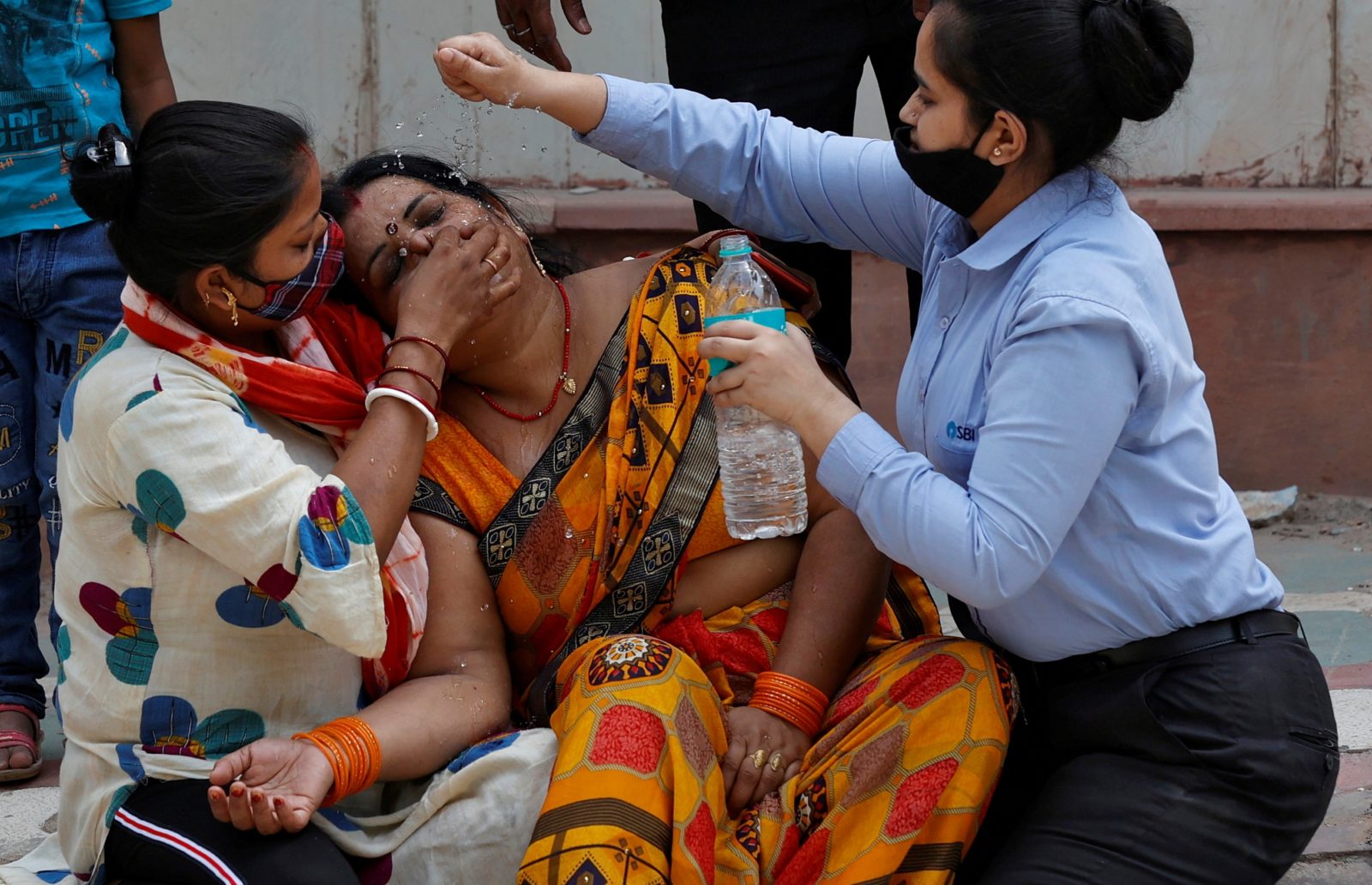 A woman is consoled after her husband died due to COVID-19, outside a hospital in New Delhi, April 15, 2021. Photo: Reuters/Danish Siddiqui

Amidst reports of overwhelmed hospitals, graveyards running short of space and crematoria working 24×7, it might sound odd to ask if mortality will be lower during this wave. But several recent articles on the current COVID-19 wave have raised such questions about mortality.

1. Are there reasons why the total number of deaths will be fewer this time than during the first wave?

2. Are there reasons why a smaller fraction of those who get infected by SARS-CoV-2, the virus responsible for COVID-19, will die this time?

These are difficult questions but let’s look at them carefully anyway.

Discussions of COVID-19 mortality in India run into an immediate hurdle: we have little idea of how many people have died from the disease so far.

But we should be wary of such comparisons: many deaths never make it into the official figures. Underreporting of COVID-19 deaths is a worldwide problem, but it seems to be particularly acute in India.

During the first wave, reports of large-scale underreporting appeared from across the country. Even where such reports did not emerge, careful analysis of the data often suggested that deaths might be going missing from official statistics.

Although this surge is quite recent, we have already seen accounts of massive fatality underreporting in Gujarat and Madhya Pradesh. No doubt the same themes are playing out in many states: we only get such reports where an active local media examines records, and journalists visit hospitals, graveyards and crematoria.

In the absence of reliable data, we can try to estimate the toll of the epidemic in indirect ways, for example by drawing on more local data. Mumbai has seen several seroprevalence surveys to estimate infections, and the city corporation has also released some all-cause mortality data. I recently used this data to estimate the COVID-19 infection fatality rate (IFR) in Mumbai during 2020. The IFR is the fraction of total SARS-CoV-2 infections in the city that resulted in death.

The calculations suggested Mumbai’s IFR to be most probably between 0.15% and 0.33%, with a median estimate of 0.23%. Applying these values nationally, and using data on infections from the third national seroprevalence survey, would imply that the country has seen between 5 and 11 lakh COVID-19 deaths.

There are plenty of uncertainties here, and valid arguments for why Mumbai’s IFR could be higher or lower than the national figure. But it is telling that even the most optimistic estimate implies that two of every three COVID-19 deaths have been missed nationwide.

Will this wave see as many deaths as the last?

COVID-19 has already taken a big toll, much of it unrecorded. Will the current wave be less deadly? There is, unfortunately, no convincing reason to believe so.

Looking forward, it is likely that the spread of infection will be very wide indeed – and deaths will inevitably follow. Many states have already seen higher daily case counts than ever before, with no peak in sight. Some districts recorded more cases during the past two months than during all of 2020.

SARS-CoV-2 variants will also play a part. More transmissible variants will push up the number of infections. Cities with high levels of prior infection, like Pune, Mumbai and Delhi, are being pounded again by this wave. We have to wonder what role immune evasion – the ability of some variants to reinfect people previously infected by other variants – is playing in this surge.

So, new infections are occurring at high speed – but the final total depends on how long this wave lasts. Could it be short and sharp? It seems unlikely, but we will learn more by watching states which were hit early. In Maharashtra and Punjab, there are a few positive signs: some districts, though not all, seem to have passed a peak.

If infection could be brought down fast in Maharashtra, it would signal hope for the rest of the country. But bringing the number of infections down is not easy. The limited improvement thus far comes after fairly intense measures to slow the spread. And some districts in the state continue to report a rising case load.

Will fewer of those infected die?

It is reasonable to hope for some reduction in the national IFR during this wave. Some infections could be milder if they are among people who have been vaccinated or were infected before.

Even though the scale of vaccination has been disappointing, it could significantly cut down severe disease and deaths because it has thus far been targeted at the most vulnerable.

On the other hand, there are factors that could push the IFR upward. Mumbai’s elderly population saw lower levels of infection than the city’s population as a whole during 2020 – a factor that almost certainly brought the city’s fatality rate down. But rapid spread and more transmissible variants this time around could mean that people who successfully escaped infection in 2020 are unable to do so now.

There are other worries too. The speed with which infection has spread means that health systems are being overwhelmed, leading to avoidable deaths. Some will be of COVID-19 patients, and others of people facing a health crisis at the worst possible time – when all hospital beds are full.

It is also possible that more lethal variants of SARS-CoV-2 could become dominant, increasing the fatality rate. I had earlier discussed signs that this might have occurred in Punjab.

What does the future hold?

India’s second COVID-19 wave is already enormous. It looks increasingly possible that the total number of infections could surpass that during the first wave – especially if more transmissible variants are circulating.

Inevitably, with high levels of infection comes a high death toll. Given the extent of fatality underreporting we may never know exactly how high, or how this wave compares with the last.

Where there has been a high level of infection in the first wave, or good vaccination coverage of vulnerable groups, we can hope that more infections will be mild and the IFR will be lower. We should watch out for such effects and highlight them, not least because they underline the importance of vaccination.

But we can’t predict with any confidence that the IFR will be lower this time around in the country as a whole. There are simply too many unknowns. Whatever we eventually find, the best hope right now is ramping up vaccination while doing everything possible to control the spread of the disease.