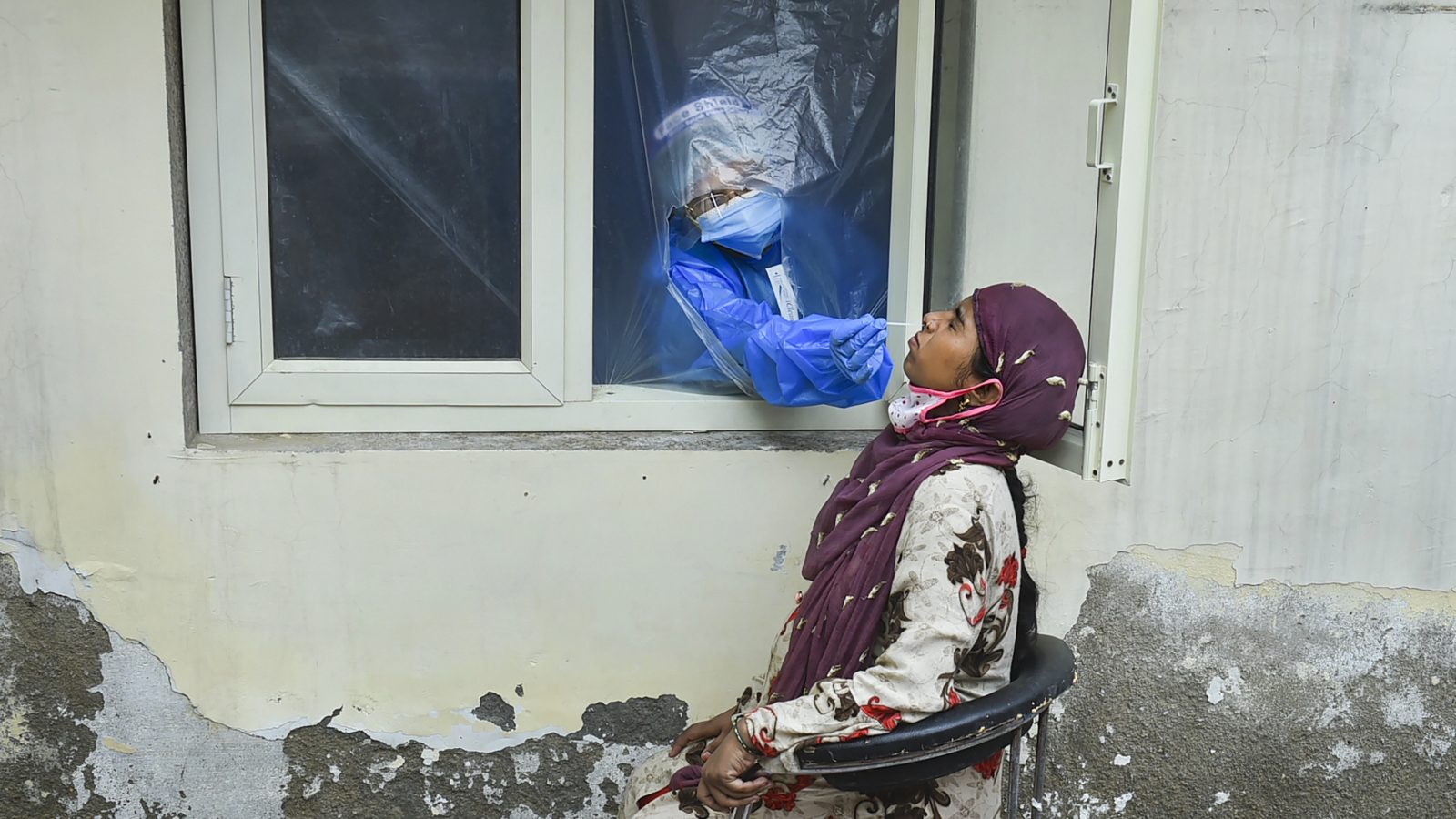 A health worker takes a swab sample from a woman for a COVID-19 test in New Delhi, August 17, 2020. Photo: PTI/Arun Sharma

New Delhi: The Central Drugs Standard Control Organisation (CDSCO), which regulates pharmaceuticals and medical devices in India, approved the manufacture and sale of ‘CoViDx One’, a RT-PCR test kit developed by Pune-based GenePath Diagnostics, on September 4. It will be manufactured by Achira Labs in Bengaluru.

The kit was validated by the Centre for Cellular and Molecular Biology, Hyderabad, and approved by the Indian Council for Medical Research (ICMR) earlier this year, according to The Hindu. GenePath’s Pune clinical laboratory had earlier been approved by the National Accreditation Board of Laboratories (NABL) and the ICMR to conduct RT-PCR tests  for COVID-19 in the country.

As such, GenePath has thus become the first private entity in India to operate an NABL-ICMR-approved COVID-19 testing lab and to have received approval to manufacture its own RT-PCR kits.

Also read: Virologists Explain: Much of the Alarm Surrounding Aerosol Transmission Is Hype

RT-PCR stands for ‘real-time polymerase chain reaction‘. These tests look for viral DNA in samples as a proxy for the virus’s presence in the body of the person from whom the sample was collected.

According to ICMR’s website, the organisation has evaluated 223 RT-PCR kits, of which 113 have been found to be satisfactory. These include kits jointly developed by the Mumbai-based iGenetic Diagnostics and Biogenomics. In March, a molecular diagnostics company named Mylab Discovery Solutions, in Pune, became the first to develop a RT-PCR kit for COVID-19, and received CDSCO approval as well.

According to ICMR, it has validating or is validating rapid antigen kits of at least 23 companies.

Also read: Review: Why Are Blood Clots Such a Major Problem in Severe COVID-19?

As for antibody test kits – ICMR has validated 142 such kits so far, and has found only around 20 to be satisfactory. Last month, it approved Delhi-based Oscar Medicare’s antibody test kit, which has been touted as India’s first official COVID-19 testing kit. Oscar Medicare is one of the largest manufacturers of pregnancy kits, and also makes HIV, HCV, dengue and malaria POC diagnostic kits in the country.

In April, Gurugram-based HLL Lifecare, which comes under the health ministry, developed an antibody test kit for COVID 19. It will be manufactured at HLL’s manufacturing facility in Manesar and was approved by the National Institute of Virology, Pune, and ICMR.

Other kits of this type that ICMR has approved include those of Voxtur Bio (Surat), Vanguard Diagnostics (Delhi), Lab Care Diagnostics India (Mumbai) and NuLifecare (Noida).

The CDSCO approved five drugs in June to help treat patients with severe COVID-19. Remdesivir and favipiravir are antivirals; dexamethasone is a steroid; and tocilizumab and itolizumab are monoclonal antibodies, as The Wire Science has reported.

However, their approval has been called into question as the approval process isn’t transparent, so it is not known what criteria the CDSCO employed to qualify them. None of the five drugs, except dexamethasone, are backed by well-designed studies that establish their safety and efficacy. Researchers found some evidence of dexamethasone’s efficacy, although the paper describing the study’s methods and results in detail isn’t yet available.

Also read: In Goa, Disease, Discrimination and COVID-19 in the Afterlife of AIDS

Most recently, itolizumab, made by Biocon, the biopharma giant headquartered in Bengaluru, has been under the spotlight. India’s drug controller-general granted it ’emergency use authorisation’ in India but also waived phase 3 clinical trials, which is atypical.

In addition, the phase 2 trials for the drug were conducted with only 30 patients, a fact that has drawn the ire of multiple independent medical researchers and doctors in India and elsewhere.