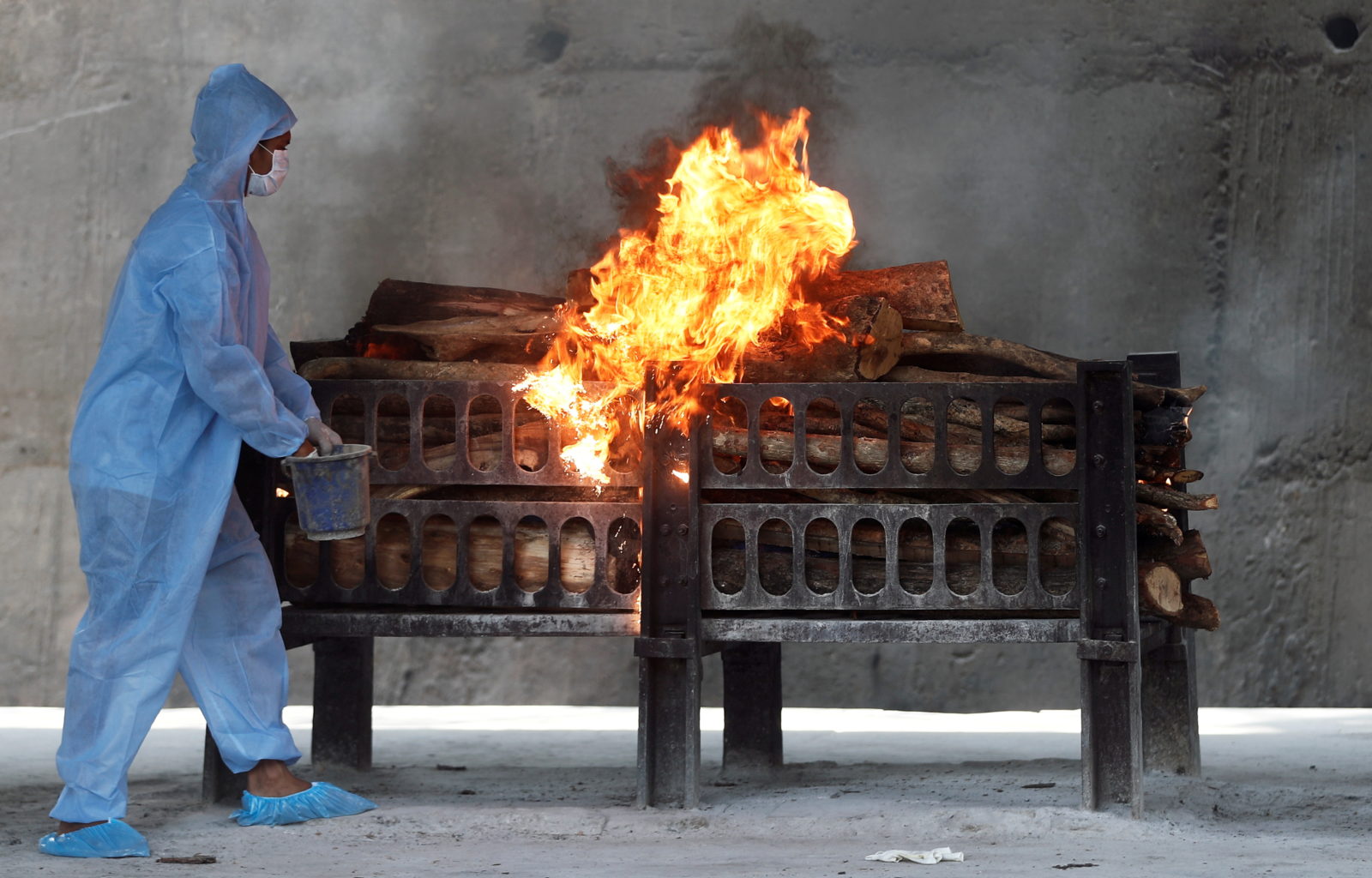 A frontline worker in PPE sprays a flammable liquid on a burning funeral pyre of a man who died from COVID-19 at a crematorium in Mumbai, April 15, 2021. Photo: Reuters/Francis Mascarenhas/File Photo

From vaccination to testing and infrastructure development, it enumerates various points.

But the two waves of the pandemic that happened in India are summed up just in these lines:

“During the first wave, the cumulative number of COVID-19 cases started rising progressively from the month of May 2020, and peaked in mid-September 2020. Thereafter, the country faced a massive surge in COVID-19 cases starting March 2021, with a peak of more than four lakh daily cases in May 2021 and more than 4,400 daily deaths by the end of May 2021. A fresh surge of cases and a new variant Omicron had surfaced in December 2021 and was spreading at the time of writing.”

There is a zero mention of the absolute horror that the country, as a whole, faced in the second wave of the pandemic which receded in July last year. There is no mention of how common people ran from pillar to post not just searching for beds and supplemental oxygen but also even basic medicines. The government went completely missing at that time and the Survey does not say a word about that.

In fact, the Survey does go on to say that the government engaged the Railways, the Air Force, the Navy and industry to meet the rise in oxygen demand but fails to acknowledge how lack of planning in advance led to the fiasco.

Indranil Mukhopadhyay, who teaches health economics at O.P. Jindal University found it bizarre. “The Economic Survey is an assessment of the year gone by. This one gives a complete miss on harsh realities of the past,”  he told The Wire.

Also, the above paragraph quoted in the survey leaves no scope of any inquiry of underreporting of COVID-19 deaths in India.

Many studies by now have said that an estimated 2-3 million deaths due to COVID-19 had happened in India till July 2021. The current official death toll of India is 0.49 million till date.

In fact, in an ongoing case in the Supreme Court as well it has come to light that many state governments have awarded more compensation in response to claims by the families of those who died after testing positive for COVID-19 than the number of such victims in their official data. Independent experts had told The Wire Science earlier that India does need detailed studies to know the extent of underreporting.

Also read: Why Kerala Reported More COVID-19 Deaths Than Any Province in the World in Last 28 Days

About the COVID-19 vaccination programme, the Survey repeats that it is a “free” exercise. However, in a reply in Rajya Sabha on November 30, 2021, the minister of state in the finance ministry, Pankaj Chaudhary, clearly acknowledged that the price of petroleum products had been hiked to support the government’s resources for various programmes, including the COVID-19 vaccination.

The Survey says that besides having Covishield and Covaxin in the kitty, India had also allowed the import of Moderna’s and Johnson & Johnson’s COVID-19 vaccines. Indeed, India had allowed that but not a single dose of the jabs reached India, ever.

The government has never clarified till now why this happened. But it is believed that the government and these firms could not reach an agreement on providing legal immunity to the former.

As far as Russia’s Sputnik-V vaccine was concerned, which the Survey talks about, it has contributed to less than 1% of the vaccination programme. Therefore, the programme has been restricted to two vaccines only – Covishield and Covaxin.

The Survey hails an anti-COVID drug, 2-deoxy-D-glucose (2-DG) developed by Defence Research and Development Organisation and Dr. Reddy’s Laboratories as an indigenous achievement.

“Drug Controller General of India (DCGI) granted permission for Emergency Use of 2-DG as an adjunct therapy in moderate to severe COVID-19 patients”.

But the fact remains that the drug could never find a place in the official treatment protocol for COVID-19 that was prepared by the Union health ministry and the Indian Council of Medical Research. Not without reason, the DCGI was criticised for shoddy work on the approval of this drug.

A section of the Survey also deals with the health sector and its developments, in general. It says India improved on various children mortality indicators like infant mortality, neonatal mortality (children dying below the age of 1), Under-5 mortality, etc. And, this was reflected in the recently released results of the National Family Health Survey (NFHS).

It is a fact that India did improve but this was just in continuity with all the previous NFHS Surveys that started in the early 90s.

What this section does not say is how COVID-19 impacted the gains made over several years in the past on the fronts such as childhood immunisation, tuberculosis elimination and malaria elimination. Forget about saying what would be done to regain that has been lost, there is no acknowledgment of the loss when there are well-documented reports clearly showing that.

“COVID-19 also disturbed other routine care. For months, surgeries were not performed and most of the healthcare was shut. And, all of this happened in 2021, a year which this Survey assesses. I am surprised to see that it is completely absent in this survey,” said Mukhopadhyay.

Another point he highlighted was this Survey just enlists what schemes the government of India is running on the health front. Other than the list, there is no analysis as to what has been achieved.

The Survey says, “The first component is the creation of 1,50,000 Health and Wellness Centers (HWCs) which cover both, maternal and child health services and noncommunicable diseases, including free essential drugs and diagnostic services.”

But when this scheme was conceptualised, it was aimed to build these many HWCs by 2022 itself. The Survey is silent as to how many have been built. Last year’s Economic Survey said only 28,005 had been built.

The Survey attempts to praise the increase in health expenditure and says ​​2.1 percent of GDP had been allocated to the sector in 2021-22, against 1.3 percent in 2019-20. It skipped the fact that India’s out-of-pocket expenditure on health, still, continues to remain one of the highest in the world. Out of the total expenditure on health happening in the country, as much as 50% is spent by the people themselves – something has also been documented in WHO reports.

“Every year the Economic Survey presents a vision. The vision can be hailed, it can be criticised. But at least it was presented. This year, the reading of the health sector feels there was no vision. And the reason for this is not understandable,” says Mukhopadhyay.