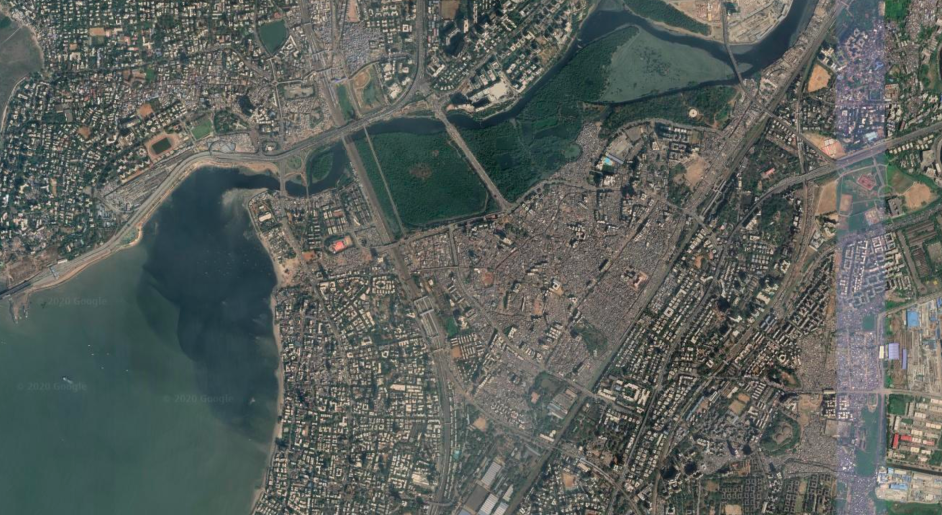 An aerial view of Mumbai. The Dharavi slum is visible as the dense clump of settlements near the image’s centre. Photo: Google Earth.

On September 9, The Indian Express obtained data from the Brihanmumbai Municipal Corporation (BMC) on excess deaths during Mumbai’s COVID-19 epidemic. We now know that Mumbai recorded 13,058 more deaths between March 1 and July 31, 2020, relative to the same period in 2019. This amounts to 6,663 additional deaths over and above the 6,395 COVID-19 deaths reported during this period.

To provide some perspective, London’s total excess deaths during the first wave of its COVID-19 epidemic were about 20% higher than its recorded COVID-19 deaths. In Mumbai’s case, this figure is over 100%. How many of these deaths were actually due to COVID-19?

There are no easy answers to this question. During the lockdown, some deaths such as those from road and rail accidents declined. At the same time, other deaths would have increased, for example of non-COVID-19 patients struggling to access healthcare. Confusing the picture further, there may also have been deaths recorded in the city of people who came from surrounding areas to seek treatment.

Despite these uncertainties, the new data brings us a step closer to understanding Mumbai’s epidemic. To say more, we first need to rewind.

Officials implied there had been a genuine drop in the infection fatality rate (IFR) – the proportion of those getting COVID-19 who were dying – on account of “strategic interventions”. But the data suggested a combination of two effects.

1. Deaths were increasingly going unrecorded. This was confirmed when around 1700 “old” COVID-19 fatalities were added into Mumbai’s count during the latter half of June, over 800 on a single day.

Can we disentangle these two effects and ask what has really been happening with COVID-19 fatality in Mumbai? The answer could be important for other cities facing their own COVID-19 epidemics in India.

Some key insights came from Mumbai’s seroprevalence survey undertaken in the first half of July. Essentially, Mumbai’s epidemic could be viewed as two interlinked epidemics – one in slum areas and the other in non-slum areas. Residents tested in the slums were over three-times as likely to have been exposed to COVID-19 as residents of non-slum areas. The slum epidemic was rapid, picking up in late March and early April and winding down two months later. The non-slum epidemic progressed much more slowly, at least after the lockdown began in late March.

Given the younger, often migrant-worker, population of the slums, we would expect the shift of disease to/from the slums to be reflected in changing levels of infection – and hence death – in different age groups. COVID-19 fatalities by age over time paint a striking picture.

Early fatalities were skewed towards the elderly. Out of Mumbai’s 64 recorded COVID-19 deaths by April 11, 60% had been among people older than 60 years. These fatalities reflect disease spread by mid-March, probably largely in housing societies following infections imported into the city in late February and March.

However, by the end of April, there had been a switch, with more fatalities now in the under-60 age groups. This remained true throughout May and early June, consistent with the rapid spread of COVID-19 in April and May among the younger slum population.

Then, another shift: in late May, although the virus’s spread was slowing in some slum areas, it was still smouldering – perhaps even picking up pace – in non-slum areas. We see this in a steady shift in fatalities back towards the elderly.

Even more striking is the comparison between the under-40s and the over-80s. The first group is numerically large but at relatively lower risk of severe disease. The second group is smaller but significantly more at risk of dying of COVID-19.

Initially, the total number of deaths in both groups were similar. Even the jumps in mid-June, caused by the addition of old deaths, were of similar size. But by July, the number of deaths in people younger than 40 years were slowing while deaths among people older than 80 years continued to rise. This was again a sign that the disease had slowed in the slums but not in non-slum areas.

We can use Mumbai’s data on deaths to roughly predict how COVID-19 IFR may have changed over time in the city. (More details, including technical ones, and caveats are available here.) This process predicts, for example, the following pattern of IFR in the city.

In this example, we find an estimated IFR for Mumbai of 0.32% on April 11, within the range of IFR values that we arrive at for this period through modelling. IFR then falls rapidly in the second half of April before slowly climbing back up to reach around 0.22% in early September. Note that these are cumulative IFR values. Current values based only on recent deaths would be higher.

This IFR pattern would explain some, but not all, of the slowdown in fatalities data in April. It suggests that by the end of July, when Mumbai had recorded 6,350 COVID-19 deaths, another 4,000-5,000 had gone unreported. We can make an educated guess that between 10,000 and 11,000 of Mumbai’s 13,000 excess deaths by the end of July were COVID-19 deaths. The data adds force to the claim that the reconciliation of Mumbai’s COVID-19 fatality data in June was incomplete.

The pattern of COVID-19 deaths in Mumbai can be largely explained by two factors: disease spreading at different times in populations with different age structures, and fatality undercounting, whether systematic or inadvertent. In April and early May, there was both increasing underreporting of fatalities and a genuine drop in fatality rate in the city as the virus moved to the slums.

The recent excess deaths data, along with the breakdown of fatalities by age, helps clarify this story. We can estimate that today, Mumbai’s recorded COVID-19 death count should be multiplied by a factor of 1.6-1.8 to obtain the true death count. An important note: if COVID-19 deaths have been missed disproportionately among the elderly, this factor could rise. So it would be helpful to have the breakdown in Mumbai’s excess deaths by age.

Also read: The Tricky Issue With Knowing How Many Are Dying From COVID-19 in India

One worry is that the fatality rate in the city could continue to rise as disease spreads in an older population. At a practical level, it is crucial that mitigation and containment don’t cease while there is still a large number of elderly residents of the city who have not been infected and may be vulnerable to developing severe forms of COVID-19.

Note: At 6:13 am on September 12, 2020, this article was edited to clarify that the BMC hadn’t released the data, and that The Indian Express had specifically obtained it.