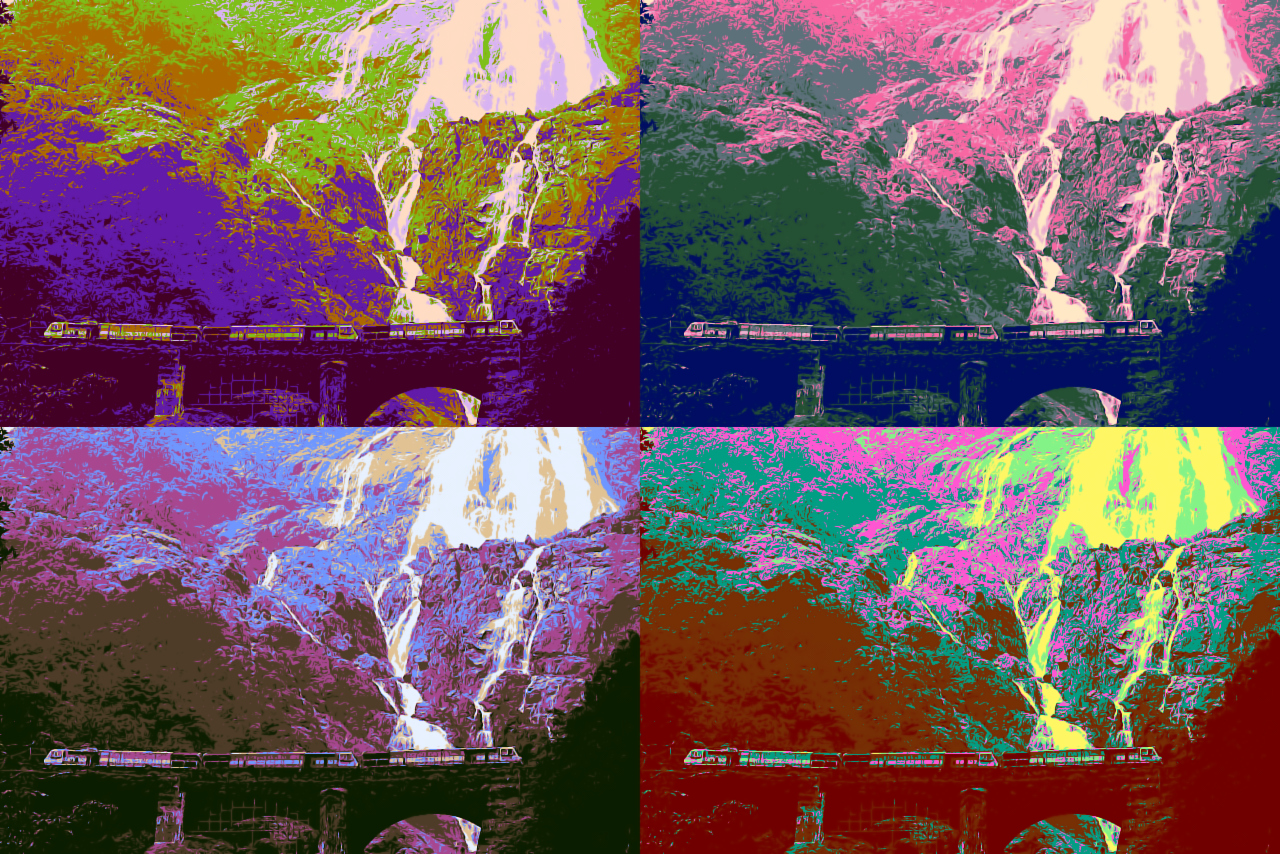 A modified photo of a train passing through a part of the Bhagwan Mahavir Sanctuary. Original photo: Purshi/Wikimedia Commons, CC BY-SA 3.0

Kochi: India made some big promises to fight climate change on the global stage. But back home, numerous environmental concerns have continued to emerge and re-emerge in 2021. Air pollution levels in the national capital did not improve this year either despite money being pumped into measures to tackle it.

India also reported wildfires and extreme weather events. But political leaders dismissed environmental concerns while clearing the way for numerous infrastructure projects. And yet, the year also had hope: people fought for their environment in many ways. Here’s a look at ten environmental developments in India that shaped the year.

In one of the most ambitious targets set by a developing country to combat climate change, Prime Minister Narendra Modi announced at the COP26 Summit in Glasgow in November that India will achieve net-zero carbon emissions by 2070. That is, the country has promised to balance all the carbon it emits by sequestering, or capturing, an equal amount. Modi also said India would achieve a non-fossil energy capacity of up to 500 GW by 2030, and that 50% of the country’s energy requirements will be met by renewable sources. Finally, he said India will reduce carbon emissions by one billion tonnes from now until 2030. But are we really ready for decarbonisation? India also took a firm stand at COP26 to “phase down”, not “phase out”, coal – which energy researchers said is necessary for India’s development paradigm.

Like every year, New Delhi’s air quality dipped in the winter months. And like every year, stubble burning was the primary cause. Crop-burning in Punjab and Haryana accounted for 30-40% of pollution in October and November this year. This is despite the government pumping in Rs 2,249 crore over four years for several measures to prevent farmers from burning their crop waste. In March, a report by a Swiss group found that New Delhi was the world’s most polluted capital for the third straight year in 2020, based on the concentration of PM2.5 particles. But poor air quality wasn’t restricted to the national capital region: Uttar Pradesh suffered too, as The Wire Science reported. The air here is so bad that people in the state capital Lucknow could lose 10.3 years of their life expectancy on average if the pollution persists.

3. People fought for the environment

It was the year of the citizen as far as the fight for environmental issues, rights and livelihoods went. In September in Chhattisgarh, members of tribal communities marched 300 km to draw the country’s attention to the government opening up more portions of the Hasdeo Aranya, a dense forest tract on which people rely for survival and livelihoods, to coal mining. And yet the Centre and state governments allowed mining to continue in the region. In Goa, people have been questioning the purpose of three developmental projects that would mean cutting down more than 40,000 trees in two protected areas in the state.

4. ‘Developing’ the Andaman and Nicobar Islands

The NITI Aayog’s developmental plan for the Andaman and Nicobar Islands has been a festering worry for activists and conservationists throughout the year. Its 75,000-crore-rupee vision includes developing a transshipment terminal with a greenfield international airport, townships and solar and gas-based power plants in the islands. Sociologists have said this will affect the indigneous Nicobarese and Shompen people. In August this year, the Union cabinet also approved an outlay of Rs 11,040 crore for a proposal to expand palm-oil production in India, with a thrust on the Andaman and Nicobar Islands. This can quickly backfire on the area’s fragile ecology, experts have warned.

5. Wildfires in Odisha and Mizoram

Mizoram experienced one of its worst-ever forest fires in April. A wildfire first spotted in Lunglei district in Mizoram soon spread to 10 other districts of the state. Preliminary reports from six affected districts alone revealed that the fire had destroyed around 5,700 acres of forests. In March, Odisha’s Similipal Biosphere Reserve also reported a big fire. A task force constituted by the state government confirmed that the fire had spread to 26 of the state’s 30 districts.

It was yet another year of extreme weather events across the country. A rare rock and ice avalanche triggered flash floods in Uttarakhand in February. More than 200 people died or went missing. Unusually heavy rains and subsequent landslides in Uttarakhand in October claimed more than 50 lives. Floods in western Maharashtra claimed more than 250, and destroyed large expanses of standing crops. India in fact reported two of the top 10 most expensive extreme events in the world, both in May: Cyclones Tauktae, which lashed the west coast and affected Kerala, Tamil Nadu, Karnataka, Maharashtra and Gujarat, and Yaas, which left more than 1.5 lakh people homeless in eastern India. Together they caused losses amounting to around Rs 33,472 crore in four countries. A flagship UN climate report said India should brace for more such events in future.

With a nod from the Union cabinet in December, the long-standing Ken-Betwa river interlinking proposal formally graduated to planning and construction. With an allocation of Rs 44,605 crore, the project is expected to take eight years to complete. It will involve constructing a dam and a channel to transfer water from the Ken to the Betwa rivers in the Bundelkhand region of Uttar Pradesh and Madhya Pradesh. While this is meant to irrigate agricultural tracts and supply drinking water to the Bundelkhand region, activists have raised questions about the fallout – including submergence of a tiger reserve and the flawed concept of river-interlinking itself.

Through the year, the environment ministry initiated amendments to several biodiversity and environment laws. Most of them will dilute existing safeguards to different degrees. The draft Environment Impact Assessment notification 2020 was already in the news when the year began. Between 2011 and May 2021, the Centre altered it more than 330 times, The Wire reported, and diluted environmental protections in place for most industrial and infrastructural projects to obtain prior environmental clearance.

In April and then in June, the ministry called for two expressions of interest to shortlist consultancy organisations that could draft comprehensive amendments to the Indian Forest Act 1927. A proposed change in the Forest (Conservation) Act 1980 suggested in July could allow ecotourism to ‘develop’ unchecked in forest lands. Next, the ministry suggested changes to the Biological Diversity Act 2002 in a way that favours AYUSH medicine practitioners and Indian companies with foreign shareholding over scientists and local communities. The ministry also plans to fiddle with the Wildlife Protection Act 1972.

10. India is now home to the largest network of Ramsar sites in south Asia

With the environment ministry designating five wetlands – Haiderpur in Uttar Pradesh and two each in Haryana and Gujarat – as ‘Ramsar sites’ in the last six months, India is now home to the largest network of Ramsar sites in South Asia. Ramsar sites are wetlands of international importance under the Ramsar Convention on Wetlands, an intergovernmental treaty that India is signatory to and which provides the framework for international cooperation to conserve and use wetlands in sustainable fashion. To enable this, Ramsar sites have strict management plans. India is currently home to 47 Ramsar sites.