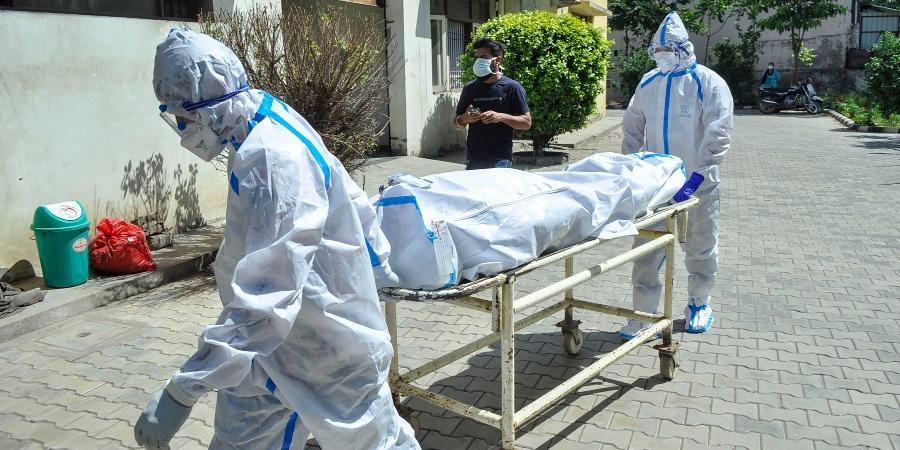 Representative image of medical workers transporting the body of a person who died due to COVID-19. Photo: PTI

New Delhi: In the past 28 days, Kerala has reported the most COVID-19 deaths among any province in the world. According to the Johns Hopkins University’s coronavirus tracker, the South Indian state has reported 5,421 deaths in this period. At a distant second is the US state of New York, which has recorded just over 4,200 deaths. In the same period, Kerala has reported more than 364,000 COVID-19 cases – while New York’s figure is more than 2.3 million. On the face of it, the situation in Kerala is very concerning.

But a closer look reveals there is more to the story. Many of the deaths that Kerala is reporting are part of a revision of its official death toll. Since October 21 last year, Kerala has added 16,958 ‘backlog’ deaths, based on the claims of compensation it has received from families of people who have died of COVID-19. The updated claims account for nearly a third of Kerala’s total death toll, which as of January 23 stands at 51,816.

The revision exercise was undertaken by the state in compliance with a Supreme Court order. The top court, hearing petitions to provide ex-gratia to families of those who died because of COVID-19, had directed the Union government in October 2021 to provide simplified guidelines. Under the new guidelines issued by the Centre, people who die within 30 days of testing positive for COVID-19 are eligible for compensation.

The Kerala government subsequently issued a government order, which said the new guidelines have added “few more criteria for declaring death due to COVID and death due to Covid complications as COVID death”. The guidelines also provide family members with an opportunity to correct the cause of death on official documents issued by the authorities, the order said.

From the beginning of the pandemic, experts around the globe have said that the official death tolls do not truly reflect the scale of the health crisis. This was especially true between April-June 2021, when India was swept by a disastrous second wave of COVID-19. Subsequent media reports, studies and estimations have shown that many states have massively undercounted deaths due to COVID-19.

Under the new guidelines, several states have accepted more compensation claims than their official death tolls – an implicit acknowledgement that the latter is an undercount of the actual COVID-19 death toll.

The updated death toll may have sullied Kerala’s reputation for managing the pandemic well. “Kerala’s mortality from Covid-19 has more than doubled in the 2nd wave compared to the first due to the addition of backlog deaths. The merit of its claims of being a state with the lowest mortality from Covid-19 has significantly diminished,” Rijo M. John, health economist and adjunct professor at Kerala’s Rajagiri College of Social Sciences, told The Print.

Also Read: COVID-19: What We Do and Don’t Know About India’s ‘Missing’ COVID Deaths

However, Kerala is among the handful of states which have updated their official death tolls. If states like Gujarat – which has handed out seven -times more compensation claims than its official death toll – were to follow the state’s lead, the situation in Kerala may not appear so grim. Indeed, even as the updated toll means that Kerala has the second-highest number of deaths among states in the country, its case fatality rate is better than most others.

John also acknowledged that Kerala is still performing better than the national average. “The overall Covid-19 mortality of 0.92% in Kerala based on reported deaths, however, continues to be lower than that of the national average at 1.38%,” he said, also adding other states should also update their official toll.

Such a possibility seems remote. For example, Gujarat’s health minister Rushikesh Patel said the state government does not plan to update the state’s official death figures.

“What has been declared by the state is the official Covid-19 death figures. There are some who died due to some other diseases and some others who died in private hospitals or at home. There were also some patients who recovered from the hospital but later died at home. That doesn’t mean they died of Covid. The Supreme Court has said that anyone diagnosed with Covid and regardless of where they died, have to be paid compensation… we are doing that,” Patel told Indian Express.

His statement flies in the face of the WHO’s definition of a COVID-19 death. The UN body defines a death due to COVID-19 “as a death resulting from a clinically compatible illness, in a probable or confirmed COVID-19 case, unless there is a clear alternative cause of death that cannot be related to COVID disease (e.g. trauma)”. A death due to COVID-19 should not be attributed to another disease (like cancer) and should be counted independently of preexisting conditions or comorbidities.

While Kerala has updated its death toll, there is still room for improvement, according to experts. The toll should have details about the date of deaths, age, gender, comorbidities and vaccination status, experts told Down to Earth.

Bhramar Mukherjee, epidemiologist and professor at the University of Michigan’s School of Public Health, told The Print that states should “check and verify the actual date of death and incorporate the number for that exact date”. The “blips in excess mortality estimates” caused by adding backlog deaths are causing confusion, she said.

“As modelers we have been distributing these ‘catch up’ numbers over a time window to smooth our fatality rate estimates. The time lag from infection to death is a key parameter and these anomalies affect our estimates,” Mukherjee added.